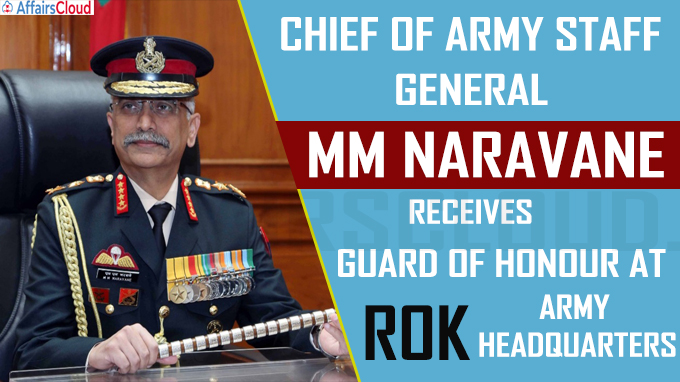 General Manoj Mukund(MM) Naravane, Chief of the Army Staff(COAS) of Indian army undertook a 3 day visit to South Korea(officially, Republic of Korea-ROK) from December 28 to 30, 2020. He received a Guard of Honour at Republic of Korea Army(ROKA) Headquarters at Gyeryong, South Korea.

Aim of the Visit-To strengthen bilateral defence cooperation between the two countries.

Highlights of the Visit:

ii.He also called on General Won In Choul, Chairman of the Joint Chiefs of Staff, Republic of Korea and held discussion regarding the methods to enhance India and ROK defence relations

iv.He also had an interaction with His Excellency Suh Wook, Minister of National Defence, ROK and made discussion regarding the mutual interest & defence cooperation issues.

ii.He also visited the Agency for Defense Development(ADD) at Daejeon.

i.General MM Naravane’s visit to South Korea comes after his visit to the United Arab Emirates (UAE) and Kingdom of Saudi Arabia from 9 to 14 December, 2020 as part of India’s military diplomacy in the neighbourhood.

ii.It is the 1st visit by Indian Army COAS to these countries.

i.The 30th Armoured Brigade was a World War II British Army unit that served in the campaign in Western Europe as part of the 79th Armoured Division.

ii.It was created on 27 December 1940 as part of Northern Command.