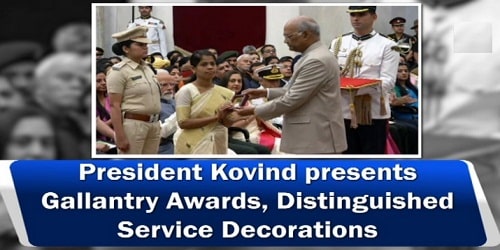 Shaurya Chakra 2019
i. About the award: It is awarded for valour, courageous action or self-sacrifice while not engaged in direct action with the enemy. It is awarded to civilians as well as military personnel, sometimes posthumously. It is third in order of precedence of peacetime gallantry awards and comes after the Ashoka Chakra and Kirti Chakra. It precedes the Sena Medal.
ii. Medal design: It is a circular bronze medal with a green ribbon divided into four equal parts by three vertical lines.
iii. Awardees: Following 14 personnel were awarded Shaurya Chakras for 2019:

Nao Sena Medals 2019
i. About the award: It is a gallantry award for servicemen in the Indian Navy. It was established by the President of India on 17 June 1960.
ii. Medal design: The medal is pentangular in shape, with curved sides made of standard silver. The mounting shall is a fixed ring attached to a metal stripe 3mm wide ornamented with Ashoka leaves. It has embossed on its obverse the Naval Crest. On its reverse, it has a trident within a circle and rope and the inscription “Nao Sena Medal” in Hindi, embossed along the upper rim. The riband is navy blue colour with a white thin silver stripe down the centre.
iii. Awardees: Following are the awardees:

Vayu Sena Medals 2019
i. About the award: It is an Indian military decoration, usually awarded in peacetime for a job well done. It can be awarded Posthumously. It was established on 17 June 1960 by the President of India. It is awarded for all ranks of Indian Air Force.
ii. Medal design: A four-armed silver star with the points shaped like lotus blooms. In the centre, the national emblem. Suspended by a straight bar suspender and normally named and dated on the edge. In the reverse side, A Himalayan Eagle with wings spread, and the legend, above and below, in Hindi “Vayu Sena Medal” or “Air Force / Medal”. Ribbon: 30 mm, alternating 2 mm diagonal (lower left to upper right) stripes of grey and orange-saffron. The ribbon has an overall “woven” appearance.
iii. Awardees: Following are the awardees:

Yudh Seva Medal 2019
About the award: It is is one of India’s military decorations for distinguished service during wartime. It is awarded for a high degree of distinguished service in an operational context, which includes times of war, conflict, or hostilities and may be awarded posthumously. It is the wartime equivalent of the Vishisht Seva Medal (VSM). It was established on June 26, 1980.
Awardees: Following are the awardees:

Maharshi Badrayan Vyas Samman 2019 was given to the following Scholars:


About Maharshi Badrayan Vyas Samman:
It is conferred on persons once a year on the Independence Day (August 15). The award introduced in the year 2002, is given to selected young scholars in the age group of 30 to 45 years. The Presidential award carries a certificate of honour, a memento and a one time cash prize of Rs.1 lakh.