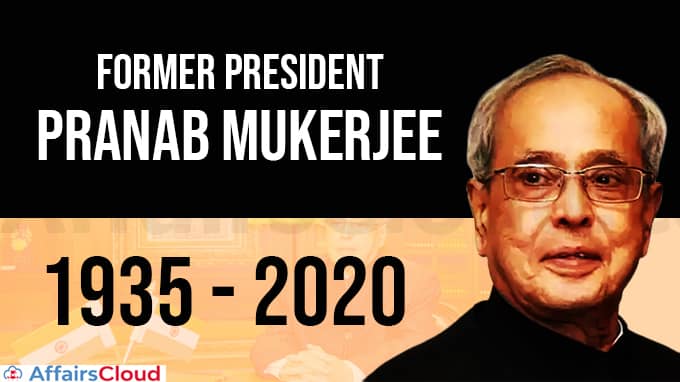 On 31 August, 2020 Former President and One of the Country’s Senior Most Politicians Pranab Kumar Mukherjee passed away after developing a lung infection at the Army’s Research and Referral Hospital, New Delhi, where he was admitted for a Brain Surgery. He had also tested Positive for Coronavirus.

Pranab Mukherjee served as the 13th President of India from 2012-2017. He was India’s only non-Prime Minister who was the leader of the Lok Sabha.

The Government of India declared seven-day national mourning till September 6 as a mark of respect to the Former President.

i.Fondly called as ‘Pranabda’, he was born in 1935 in Mirati, West Bengal.

ii.He was part of the Congress party for five decades and was considered as a formidable political strategist, draftsman and parliamentarian with an astute legal mind.

iii.Before taking his first step as a politician, he worked as a teacher and as a Journalist with Desher Dak (Call of Motherland) and also as Assistant Professor.

iv.He earned an MA degree in Political Science & History and LLB degree both from the University of Calcutta.

i.He remained with the Congress Party for five-decades, he was a member of the Congress Working Committee, the highest policy making body of the Party for a period of 23 years.

i.In 2006 during his second term as Minister of External Affairs, he oversaw the successful signing of the United States (US)-India Civil Nuclear Agreement with the US.

ii.He successfully oversaw the signing of India with Nuclear Suppliers Group, which allowed India to participate in civilian nuclear trade, in spite of not being a signatory to the Nuclear Non-Proliferation Treaty.

iii.During the period 2004-2012 he was instrumental in shaping several critical decisions of Government on various issues such as Right to Information, setting up of UIDAI, Right to Employment through Chairmanship of over 95 Groups of Ministers constituted for the purpose.

iv.Pranab Mukherjee played a vital role in setting up the Regional Rural Banks (1975) and the EXIM Bank of India as well as National Bank for Agriculture and Rural Development (1981-82).

v.He was the author of the Gadgil – Mukherjee formula, a modified formula for resource sharing between the Centre and State in 1991.

vi.He was the first Bengali to hold the post of President of India.

ii.He has led the Indian delegations to the Commonwealth Finance Ministers Conferences in 1982, 1983 and 1984.

iv.He has also led Delegation of Indian officials at the Non-Aligned Foreign Minister’s Conference at Cartagena in 1995 and the conference to mark the 40th anniversary of the Afro –Asian Conference in Bandung in 1995.

i.As president, his first announcement was to do away with the honorific ‘His Excellency’ used for the president and the governors of the states.

ii.Pranab Mukherjee launched ‘4S’ initiatives for the welfare of the staff, employees and members of their families residing in the President’s Estate.

iii.He was the first president to teach school children inside the Rashtrapati Bhavan. He taught class 11 and 12 students of the Rajendra Prasad Sarvodaya Vidyalaya in the President’s Estate.

iv.He launched the ‘E-Pustakalaya’ project for barcoding and cataloguing of books. Using e-Granthalaya software, relating to the Automated Library of President’s Secretariat (ALPS), around 8310 e-books were uploaded under the e-office platform.

iii.Best Parliamentarian Award in 1997 and Best Administrator in India Award in 2011.

iv.One of the best five Finance Ministers of the world in 1984 according to a survey conducted by “Euro Money” Journal published from New York.

v.‘Finance Minister of the year’ for Asia in 2010 by “Emerging Markets”, the journal of record for the World Bank and the IMF.

ii.Pranab Mukherjee’s book ‘The Presidential Years’ will be released on his birth anniversary on 11th December. It will be a unique autobiographical account which will give the readers a bird’s eye view of the functioning of Rashtrapati Bhavan from the imposition of President’s rule in Arunachal Pradesh to demonetization. It is published by Rupa Publications.