On May 1, 2020, Minister of Consumer Affairs, Food and Public Distribution Shri RamVilas Paswan approved the integration of 5 more States and Union Territories under “One Nation One Ration Card” plan with the already 12 existing states taking a total number of states/UTs to 17. 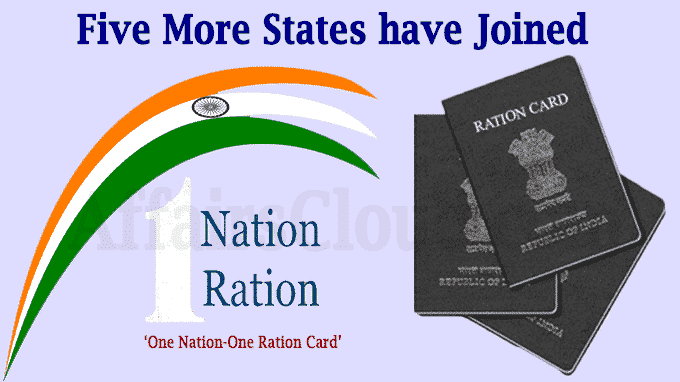 Benefit of One Nation One Ration Card:

With this, the facility of national/inter-State portability will be available for nearly 60 Crore beneficiaries of 17 States/UT under National Food Security Act (NFSA) and they may lift their entitled quota of food grains from any Fair Price Shop (FPS) anywhere in these 17 States/UT by using their same/existing ration card.

Reason behind the move:

This decision to integrate 5 more states has been taken as per the Supreme Court direction to the Centre for taking the appropriate decision regarding the implementation of “one nation-one ration card” under the lockdown scenario, as there have been reports of problems faced by migrant workers in getting subsidised food grains.

About one nation, one ration card:

The scheme announced in June 2019 allows portability of food security benefits across the country from 1st June 2020. This means poor migrant workers or the beneficiaries who are taking food grains under the Public Distribution System (PDS) will be able to buy subsidized rice and wheat from any ration shop in the country. Simply, it is inter-state portability of ration cards.