The annual World Economic Forum’s 100 Young Global Leaders list released for the year 2017 have given place to five Indians for their innovative approaches. 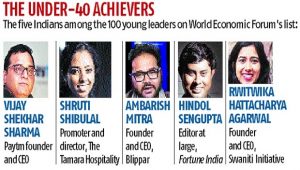 Vijay Shekhar Sharma was born in Aligarh, Uttar Pradesh. In 2005, he started One97 Communications which offered mobile content like news, cricket scores, ringtones, jokes and exam results. One97 is the parent company of Paytm, which was launched in 2010.

Ambarish Mitra is an Indian entrepreneur best known for founding Blippar, a visual search, artificial intelligence and augmented reality (AR) company based in the United Kingdom of which he is the CEO.

Hindol Sengupta, born in 1979 is an Indian journalist and entrepreneur, who is the award-winning author of seven books.

Rwitwika is the founder of the Swaniti Initiative. Prior to working on Swaniti’s foundation, she worked at the World Bank as an Associate in the Growth and Competitiveness area.

The list consisted of nine global leaders from South Asia, out of which five were from India. Besides, the list also had some persons of Indian origin in the US and Europe.

About the WEF’s 100 Young Global Leaders

Each year, the World Economic Forum (WEF) selects 100 young leaders, under the age of 40, who are tackling the world’s most complex challenges with innovative approaches.