The 11th edition of DefExpo-2020, organized by Department of Defence Production, Ministry of Defence with a support of Government of Uttar Pradesh (UP) was held in Lucknow, Uttar Pradesh (UP) for the first time from 5th to 9th Feb 2020. It’s main theme was “India: The Emerging Defence Manufacturing Hub” with focus on “Digital Transformation of Defence”. This expo is also termed as “Mahakumbh of defence manufacturing companies”. The last two days of the expo was opened for public. 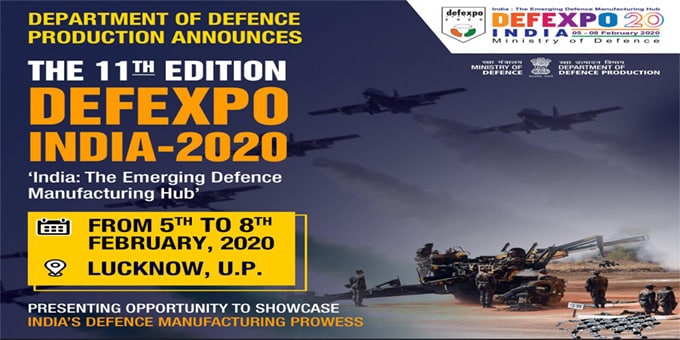 Aim: To bring new technologies, technological solutions, and to provide single platform for Defence manufacturing companies from India and abroad to showcase their products and services.

Participants: The number of companies registered for participating in the DefExpo 2020 was 1,028 which led to the biggest ever DefExpo held in India. The number of participating foreign companies has also increased to 172 from the previous figure of 160. Ministers from 15 African countries participated in the conclave. Defence ministers of 40 countries and over 3,000 delegates from 70 nations attended the event. Apart from them, there was also a 39-member ministerial delegation from Russia, England, and Seychelles, among other countries.

Meeting & Conclaves
The DefExpo 2020 saw the series of meetings which are listed as below:

What is Lucknow declaration?

The Lucknow Declaration is signed by the defence ministers and representatives of 50 African countries with Indian defence minister Rajnath Singh to recognise common security challenges such as terrorism, extremism, piracy and trafficking.

5th India-Russia Military Industrial Conference (IRMIC) in Lucknow; 14 MoUs signed
On Feb 6 2020, the 5th India-Russia Military Industrial Conference (IRMIC) was held on the sidelines of the ongoing Def Expo 2020 in Lucknow. The conference was co-chaired by Dr. Ajay Kumar, Defence Secretary from the Indian Side and Mr. Oleg Ryazantsev, Deputy Minister of Industry and Trade of Russian Federation. During the conference, 14 memorandum of understanding (MoU) were signed between Indian and Russian companies under the Make in India initiative.

ii.The MoUs were signed under a framework of an inter-governmental agreement (IGA) sealed between India and Russia in September 2019.

iii.The first ‘Request for Proposal’ for manufacturing of parts in India under the provisions of IGA was also handed over by the Indian Navy to the “identified Indian industry

iv.Major companies which are part of these MoUs includes BHEL, Bharat Dynamics Limited and Vista control from Indian side and INVERSIA, UVZ and BEML Ltd. from the Russian side.

UK-India Defence Industry Forum held in Lucknow, UP
On Feb 7, 2020, during the UK-India Defence Industry Forum, the UK India Business Council (UKIBC) and the Society of Indian Defence Manufacturers (SIDM) signed a MoU to forge closer defence ties between the two countries. The MoU was signed on sidelines of the ongoing DefExpo 2020 by the Vice Chair of UKIBC Richard McCallum and Rear Admiral A K Verma IN (Retd.), Principal Adviser, SIDM.

Bandhan, DefExpo 2020: The MoU signing ceremony
Bandhan, a ceremony for signing of MoUs, launch of products and major announcements, was presided by Raksha Mantri Rajnath Singh. This expo saw the signing of largest number (over 200) of Memorandum of Understanding (MoUs), Transfer of Technology (ToTs), and product launches. There were 124 MoUs between DPSUs (Defence Public Sector Undertakings), private and global defence manufacturing companies. Here is the list of important ones:

23 MoU inked through Uttar Pradesh Expressways Industrial Development Authority (UPIEDA)
During this event, twenty-three MoUs have been inked with the UP government through UPIEDA and have received proposals for investment worth ₹50,000 crore ((US$ 7.15 billion) which would generate employment opportunities for over three lakh youths in the state. As a part of MoUs, HAL would soon supply Dornier 19-seater civilian aircraft to U.P.

HAL and IIT Kanpur: HAL signed MoU with IIT Kanpur for providing Do-228 or HS 748 aircraft towards extending logistic support to the Institution’s projects in the field of ‘Cloud Seeding’.

HAL and JSC Rosoboronexport: HAL and Russia’s JSC Rosoboronexport signed MoU envisages export of spares and services to friendly countries for which license has been given to HAL. The scope will include Su-30 MKI, AL 31 FP engine, RD33 engines, accessories etc.

BEL MoU with BHEL
A MoU was signed between Bharat Heavy Electricals Ltd (BHEL) and Bharat Electronics Ltd (BEL) during DEFEXPO 2020 at Lucknow, UP. The MoU will also enable BHEL and BEL to make joint efforts to explore markets for products individually developed or jointly developed by both companies.

BEL MoU with OFB
Bharat Electronics Limited and Ordnance Factory Board (OFB) have signed MoU to continue their existing co-operation in the field of air defence and artillery Gun Systems, Armoured Fighting Vehicles, Arms & Ammunition and related Products, Systems and Accessories, leveraging complementary strengths, to meet the requirements of Indian Defence forces among others.

L&T, ideaForge sign pact for high-tech drone manufacturing
Infrastructure giant Larsen & Toubro (L&T) has entered into a pact with ideaForge, domestic unmanned aerial vehicles manufacturer, to offer hi-tech drones and allied systems for defence use. They will also offer anti-drone solutions to counter the threat of malicious or unintended usage of drones.

How DefExpo2020 is game changer for Uttar Pradesh?
This DefExpo has projected the new identity of Uttar Pradesh in defence sector which already has a strong defence industrial infrastructure. It has four units of Hindustan Aeronautics Ltd (HAL) at Lucknow, Kanpur, Korwa and Naini (Prayagraj), nine ordnance factory units, including Kanpur, Korwa, Shahjahanpur, Firozabad and one unit of Bharat Electronics LimitedNSE 0.35 % at Ghaziabad. One of the two Defence Industrial Corridors (DICs) of India is also planned in Uttar Pradesh. The Corridor will encourage Defence Micro Small and Medium Enterprises (MSMEs), including Indian defence industry. Uttar Pradesh will now become a “new hub” of defence production.