The first ever world patient safety day (WPSD) is observed on September 17, 2019 launched by World Health Organisation (WHO) to mark the importance of patient safety under the campaign ‘Medication without Harm’. The theme for the year 2019 is ‘Patient Safety: a global health priority’ and its slogan is ‘Speak up for patient safety’. On May 24, 2019, this day was first endorsed by the member states from all the 194 countries of WHO in the 72nd World Health Assembly(WHA) in Geneva, Switzerland to observe it on September 17 officially under the resolution WHA72.6. 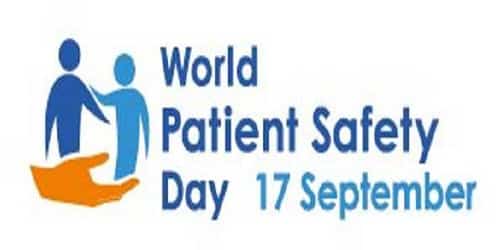 Key points
i. This day marks the coming togetherness of all global stakeholders for the patients’ safety that also includes patients’ groups, care givers, civil society organisations and other relevant stakeholders.
ii. WHO report: According to WHO reports, 4 out of 10 patients are harmed in primary and ambulatory care. 134 adverse million events occur in lower middle income countries (LMICs) that contributes to 2.6 million deaths annually out of which 80% of these deaths however could be avoided.
iii. Medication safety report: The WHO also launched three technical reports on medication. They are

iv. On this day Cities around the world such as Jet d’Eau in Geneva, the Pyramids in Cairo, Kuala Lumpur Tower in Malaysia, The Royal Opera House in Muscat, Oman, and the Zakim bridge in Boston etc, lightened up monuments in orange color to show their commitment to safety of patients on 17 September.
v. GPSC: The WHO and the United Kingdom(UK) entered into a collaboration for the establishment of Global Patient Safety Collaborative(GPSC) to improve patient health systems.