On September 7, 2019, Prime Minister (PM) Narendra Modi inaugurated the first Metro Coach in Mumbai under the ‘Make in India’ initiative at Jio World Centre, Maharashtra, Mumbai. He also launched Rs.19,000 crore worth metro projects with previous investment of Rs 1.5Lakh crore and laid foundation stone of  3 Metro lines to the metro network of the city expected to be operational from 2031. 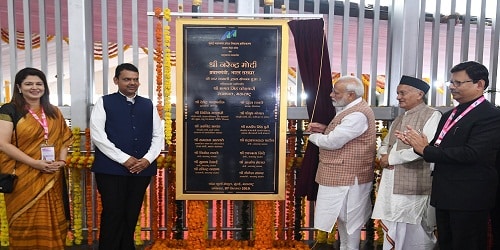 Visit to Mumbai
i. Metro projects: The metro projects were launched with vision ‘Mumbai in Minutes’.
ii. Metro Bhavan: PM laid foundation stone of the state-of-the-art Metro Bhavan which is a 32 storey centre and would control 14 metro lines around 337 km radius. It would be constructed on the 20,387 square meter plot with buildable area 1,14,088 square meters.
iii. Metro Coach:  The metro coach was made in a record time of 75 days with design speed 90 kmph and operational speed 80 kmph. It was designed by Bharat Earth Movers Ltd(BEML) in Mumbai.
iv.Metro station: Bandongri Metro Station in Kandivali East of Maharashtra was inaugurated by PM.
v. The three metro lines:

Visit to Aurangabad:
In Aurangabad shri Modi addressed ‘MahilaSakshamMelava’ (Empowered Women’s Meet) of the Self Help Groups(SHG) organised by the Maharashtra State Rural Livelihood Mission (MSRLM).
i. AURIC: The first phase of Aurangabad Industrial City (AURIC) of 10,000 acre area developed under Delhi-Mumbai Corridor at the Shendra industrial area, Maharashtra was observed to become an industrial centre in the near future with more job generation. AURIC in the Marathwada region of Maharashtra, is the first Greenfield industrial smart city in the country.
ii. AURIC hall and chatbot: A 6 storey AURIC hall was inaugurated and an Auricchatbot to address city administration problem was launched.
iii. LPG distribution:   Achievement of 8 crore Liquified Petroleum Gas(LPG) connections distributed under the Pradhan Mantri Ujjwala Yojana (PMUY) was made on the occasion. This marks the achievement of 8 crore gas connections 7 months ahead of the target period.
iv. Book release: PM launched a book titled “Transforming Rural Maharashtra”.
v. Mega water scheme: Under the JalJeevan mission the government is to spend Rs. 3.5 lakh crore in the next 5 years to provide piped water connection (HarGharJal) to all rural households by 2024. This move is dedicated to legendary socialist late Ram ManoharLohia for his dream of providing water to lessen the water issues faced by women.
vi. Members present: