The Defence Minister of India, Shri Rajnath Singh visited Japan and South Korea. He held a 5-day visit to the countries with an aim to strengthen military and defence from September 2-6, 2019. 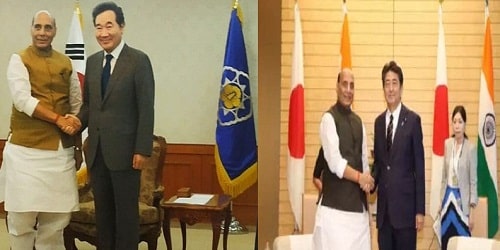 Other highlights
i. Mr Rajnath Singh called on Prime Minister of Japan, Mr Shinzo Abe and held discussions with him.
ii. He paid homage to the martyrs of Japanese Self-Defence Forces at Ichigaya in Tokyo.
iii. He inspected the Guard of Honour at Ministry of Defence Headquarters, Japan.
iv. India & Japan decided to accelerate cooperation in the area of defence equipment and technology & urged deeper discussions between the Acquisition, Technology and Logistics Agency (ATLA) and the Department of Defence Production (DDP).
v. He paid a visit to the Hamamatsu Airbase in Japan & inspected the functioning of F-15 fighter aircraft and Kawasaki Trainer plane.
vi. He visited the Japan Maritime United Yokohama Shipyard Isogo Works in Yokohama.

Visit to South Korea
Raksha Mantri Shri Rajnath Singh arrived in Seoul, Republic of Korea (ROK)
on the second leg of his two-nation tour to Japan and South Korea on September 4, 2019.

Guard of Honour
Union Defence Minister Rajnath Singh received the Guard of Honour by the Tri-Services in South Korea. India’s national anthem was played out at the Ministry of National Defence in Seoul.

8th Seoul Defence Dialogue for 2019
The 8th Edition of Seoul Defence Dialogue 2019 was held with the theme “Building Peace Together: Challenges and Visions” in Seoul, South Korea. It is an annual international security forum hosted by the Ministry of National Defense of South Korea.
i. It had 4 plenary sessions. The themes of the four plenary sessions are “Peace Process on the Korean Peninsula and International Cooperation,” “Peace in Northeast Asia: Challenges and Tasks,” “International Peacekeeping Operations and Humanitarian Assistance” and “National Strategy and Crisis Management in Cyberspace.”
ii. Indian Defense Minister Rajnath Singh addressed the dialogue. He called for a collective international action to check perpetrators of terrorism and advocated strong measures against those who support and finance terrorism and provide sanctuary to terrorists.
iii. Raksha Mantri emphasised that good relations with neighbours are a priority for India’s foreign policy as part of its Neighbourhood First Policy.

MoUs
India and South Korea signed 2 Memorandums of Understanding (MoU) to enhance defence educational exchanges and extend logistical support to each other’s Navies. It will help to enhance defence cooperation between India-Republic of Korea.

Other Highlights
i. The Defence Minister laid a wreath at the National Cemetery in Seoul.
ii. He attended the CEO’s (Chief Executive Officer) Forum in Seoul. The Forum was jointly organised by the Embassy of India and Department, Defence Production, Ministry of Defence (MoD), South Korea.
iii. He attended a Business-to-Government (B2G) meeting with the participation of members of the defence industry from both sides with an aim to encourage cooperation between the defence industries of India and South Korea.
iv. He visited the War Memorial to which he presented a copy of the citation received by the Indian 60th Para Field Hospital for its exceptional contributions during the Korean War.
v. Shri Rajnath Singh addressed CEOs of Korean and Indian Defence Industries in Seoul, in the presence of Minister of Defence Acquisition and Program Administration, ROK, Mr Wang Jung-hong & invited the Korean Industry to explore the feasibility of local production of items, used in main weapon system, imported by Indian Defence PSUs (Public Sector Undertakings). He proposed setting up of a task force which identifies such items which are economically viable and locally produced in India resulting in reduction of import bill.