On September 14,2017scientists from Brown University have created the first map of water and its chemical building blocks trapped in the uppermost portion of the Moon’s soil.The research was funded by the NASA Lunar Advanced Science and Exploration Research Program.The study was published in Science Advances journal. 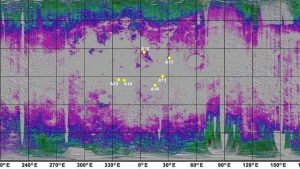 Details and findings from the map :
i. It is built on the initial discovery in 2009 of water and a related molecule hydroxyl, which consists of one atom each of hydrogen and oxygen in the lunar soil.
ii. It also used a new calibration of data taken from NASA’s Moon Mineralogy Mapper, which flew abroad India’s Chandrayaan-1 spacecraft.
iii.Study’s lead author, Shuai Li said “The signature of water is present nearly everywhere on the lunar surface, not limited to the polar regions as reported earlier”
iv.Amount of water increases toward the poles and doesn’t show much difference on various terrains, it decreases towards the poles.
v.The water concentration reaches a maximum average of around 500 to 750 parts per million in the higher latitudes. That is less than what is found in the sands of Earth’s driest deserts.
vi. Researchers said the way water is distributed gives a clue to find their source. After confirming the presence of water on moon researchers are now working on whether this water could be used for drinking purposes.
vii. It has been confirmed that there is a connection between solar wind and water in moon. The constant bombardment of protons from the Sun, can form hydroxyl and molecular water.
viii. However researchers concluded that solar wind is not the only criteria for water on moon there may be other factors too.For example, the researchers found higher-than-average concentrations of water in lunar volcanic deposits near the Moon’s equator, where background water in the soil is scarce.The water in those localised deposits likely comes from deep within the Moon’s mantle and erupted to the surface in lunar magma.
ix.The study also found that the concentration of water changes over the course of the lunar day at latitudes lower than 60 degrees, Itis wetter in morning and evening and dry in noon

NASA’s Cassini spacecraft successfully travels between Saturn and its rings