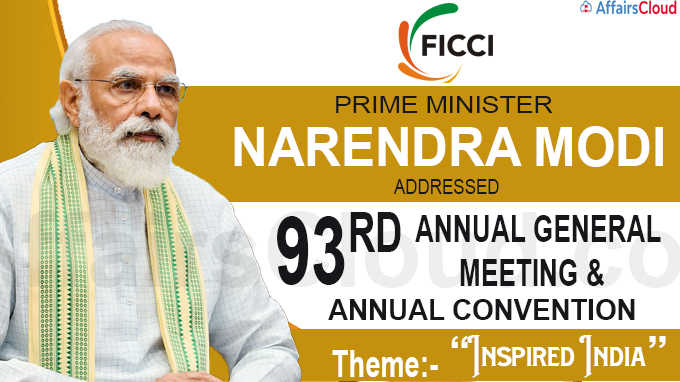 The FICCI’s (Federation of Indian Chambers of Commerce & Industry) Annual Convention & 93rd Annual General Meeting (AGM) was held virtually amid COVID-19 on the theme “Inspired India” on December 11, 12 & 14, 2020. It was inaugurated by Prime Minister (PM) Narendra Modi on December 12, 2020 and his inaugural address highlighted the success of financial inclusion through the trinity of J-A-M (JanDhan, Aadhar and Mobile).

–The Asian Development Bank (ADB) changed its forecast for the Indian economy to 8% contraction in 2020-21 as compared to -9% earlier.

–In April-August 2020, India received the highest ever total Foreign Direct Investment (FDI) in the first five months viz.US$35.73 billion, 13% higher than that in the same period of FY20.

–Private sector will remain an active participant in defence manufacturing for achieving the turnover of Rs 1,75,000 Crores and exports of Rs 35,000 crore.

–Launch of ‘Aatma Nirbhar Bharat Abhiyaan’ is a “Watershed” moment in the economic history of India.

–Centre is taking steps in the direction of interest of the farmers and the government is always ready to listen to them.

During his address at the AGM, Piyush Vedprakash Goyal stated that the Government has identified another 24 sectors on which work is going on by industry leaders to add nearly Rs 200 lakh crores worth of manufacturing in India in the next 10 years.

Participants: Over 10,000 delegates from across the world participated in the AGM along with several ministers, bureaucrats, industrialists, diplomats, international experts, and other leading luminaries.

–FICCI Annual Expo 2020 provides an opportunity to exhibitors from across the globe to showcase their products and advance their business prospects.

i.On 2nd October 2020, FICCI Ladies Organisation (FLO), the women’s wing of FICCI and National Skill Development Corporation (NSDC) signed a Memorandum of Understanding (MoU) under the 3C initiative of FLO to empower women with employability through skill training and to promote women entrepreneurship.

ii.FLO signed a MoU with the Incubation and Enterprise Support Centre (IESC) of Indian Institute of Management (IIM), Shillong to mentor women’s entrepreneurs.