The Periodic Labour Force Survey (PLFS) data published by the National Sample Survey Office (NSSO) reported that female labour force declined in India in 2017-18. It is one among the world’s bottom 10. In 2011-12, India was placed at 12th from the bottom globally. 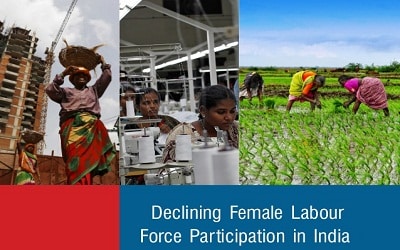 i. India’s female Labour Force Participation Rate (LFPR) pointed out that three out of four women over the age of 15 in India were neither working nor seeking work.
ii. Bihar had the lowest rate of female workforce participation whereas the southern and eastern states did better.
iii. The most common jobs for urban women were of garment workers, domestic cleaners and ‘directors and chief executives’ among which 99% of were self-employed. Most rural women worked in agriculture-related jobs.
iv. The teaching profession made the top 10 most common jobs for women.
v. As per the International Labour Organization (ILO) estimates, during April-June 2018, the average employed Indian woman worked for 44.4 hours per week as against the developing country average of 35-36 hours,
vi. Women performed the majority of unpaid household and care work in developed and developing countries.
vii. In rural areas, salaried men earned nearly 1.4 to 1.7 times of a female salaried employee. In urban areas, salaried men earned 1.2 to 1.3 times a salaried woman.
About NSSO:
♦ It works under the Ministry of Statistics of the Government of India.
♦ It was established in 1950.
AffairsCloud Recommends Oliveboard Mock Test