On June 15, 2019, The fifth meeting of the Governing Council of The National Institution for Transforming India (NITI) Aayog was held under the chairmanship of the Prime Minister Shri Narendra Modi at Rashtrapati Bhawan Cultural Centre, New Delhi. It was attended by the Governor of Jammu & Kashmir, 26 Chief Ministers and the Lieutenant Governor of Andaman & Nicobar Islands, Union Ministers and special invitees. This was the first governing council meeting under the new Modi government. The guiding principle of Union Government is “Sabka Saath, Sabka Vikas and Sabka Vishwaas”. 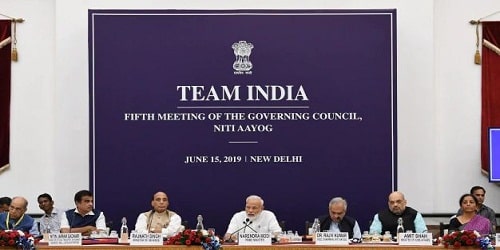 Agenda of the Meeting:
On the Agenda, the following items were mentioned:
i. Rain-Water Harvesting.
ii. Drought Situation and Relief Measures.
iii. Aspirational Districts Programme – Achievements And Challenges.
iv. Transforming Agriculture: Need For Structural Reforms With Special Emphasis On:

Highlights of the Meeting:
i. The Prime Minister spoke on the common goal of achieving a New India by 2022.
ii. The goals set for the 150th anniversary of Mahatma Gandhi should be achieved by October 2, 2019 and he insisted to begin the work to achieve the goals for 2022, the 75th anniversary of independence.
iii. Speaking about the newly created Jal Shakti Ministry, PM urged States to integrate their efforts towards water conservation and management. The aim of the Government is to provide piped water to every rural home by 2024 and called for effective steps to tackle drought. Maharashtra, Rajasthan, Telangana, Gujarat and Karnataka have adopted good practices in water conservation and rainwater harvesting. Some initiatives like

iv. Focus should be given to fisheries, animal husbandry, horticulture, fruits and vegetables in order to fulfill the commitment to double incomes of farmers by 2022.
v. PM reaffirmed the commitment to combat Left Wing Extremism (LWE) and said that Naxal violence in aspirational districts will be dealt firmly.
vi. The target to eliminate Tuberculosis (TB) by 2025 was mentioned and PM urged the States who have not implemented Pradhan Mantri Jan Aarogya Yojana (PMJAY) under Ayushman Bharat to implement it at the earliest.
vii. Core agenda items in the agri-economy included the need to review the implementation of the Agriculture Produce Marketing Committee (APMC) Act and possible reform in the form of the Model APMC Act and explore changes in the Essential Commodities Act (ECA). Emphasis was made in the need to undertake structural reforms in agriculture including encouraging corporate investment, strengthening logistics and focusing on food processing.
viii. The Council reviewed the implementation of the Aspirational Districts Programme through 49 key performance indicators of human and social development.
ix. Focusing on the development of road and telecom infrastructure, PM said 11,000 km of roads were constructed at a cost of Rs 18,000 crore of which 5,500 km of roads were completed. 2335 mobile towers were installed and in next phase, 4072 towers costing Rs 11,000 Crore would be installed.
x. The Union Finance Minister Nirmala Sitharaman stated that total transfers under various headings between 2011-12 and 2014-15 amounted to Rs 20 lakh crore. In the last 4 years, those were increased to Rs 41 lakh crore.
xi. Council decided to set up a high-powered committee on structural reforms in agriculture. It will consist of state chief ministers and central ministers. They will prepare a blueprint for structural reforms in agriculture.

About the Governing Council of NITI Aayog
The Governing Council of NITI Aayog comprises the Prime Minister of India, Chief Ministers of all the States and Union Territories with Legislatures and Lt. Governor of Andaman and Nicobar Islands, and four Union Ministers as ex-officio members and three Union Ministers as Special Invitees.
Headquarters of Niti Aayog: New Delhi
Formation: January 1, 2015