Birhanu Legese from Ethiopia and Cynthia Limo from Kenya have won the 2015 Delhi Half Marathon in men’s and women’s categories respectively. In this eighth edition of marathon around 34,000 athletes and amateur runners from different parts of the world had participated. 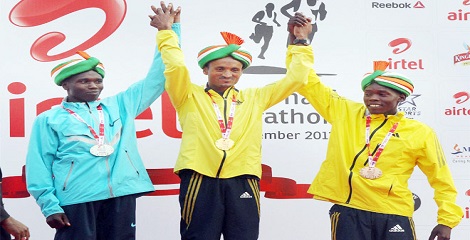 Among the Indian runners

About Delhi Half Marathon
Airtel Delhi Half Marathon (ADHM) is an annual half marathon foot-race held in New Delhi, India. It is both an elite runner and mass participation event. It is an AIMS-certified course and is listed as a Gold Label Road Race by the IAAF