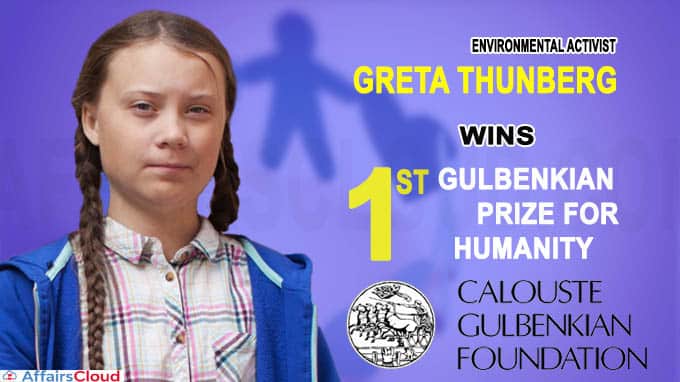 A 17 years old climate activist from Sweden namely Greta Tintin Eleonora Ernman Thunberg became the first recipient of the inaugural (1st edition) Gulbenkian Prize for Humanity, awarded by Calouste Gulbenkian Foundation. The award in the amount 1 million euro ($1.15 million) recognized her ability to mobilize younger generations for the cause of climate change.

Entire Prize amount to be donated:

The entire amount of 1 million euro from the Gulbenkian Prize for Humanity would be donated by Greta Thunberg to the project and organisations who are working to help people on the front lines affected by the climate crisis and ecological crisis.

About Gulbenkian Prize for Humanity:

Launched in 2020 as an annual award, the aim of the prize is to recognize people, groups of people and/or organizations from all over the world whose contributions to mitigation and adaptation to climate change stand out for its novelty, innovation, and impact.

-On February 21, 2020, a group of scientists with Naturalis Biodiversity Center, a research center on biodiversity based in Leiden, the Netherlands, have discovered a new species of land snail and named it “Craspedotropis gretathunbergae” to honour Greta Thunberg for her efforts to raise awareness about climate change.