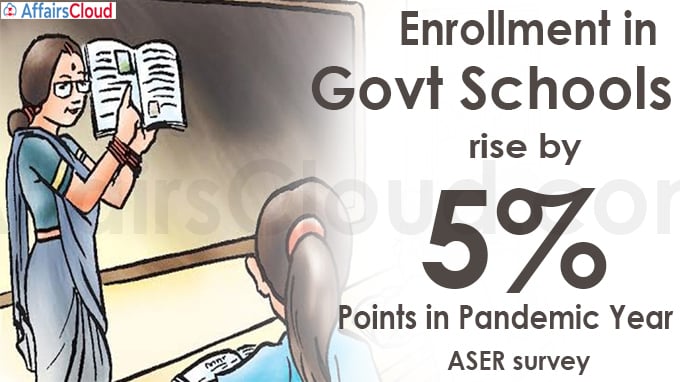 The latest Annual Status of Education Report (ASER) survey highlighting the transition in the education system in the country was released by Wilima Wadhwa, Director, ASER Centre. As per the report, children enrollment in government schools has increased from 65.8%  in 2020 to 70.3% in 2021. It was 64.3 % in 2018.

Key Points:
i.The number of students depending on tuition classes also raise from 32.5% in 2020 ASER survey to 39.2%. This rise is due to the prolonged closure of schools.
ii.The enrollment in private schools has dipped, for the first time in recent years, from 28.8% in 2020 to 24.4% in 2021.
iii.In case of Digital divide, 26.1% children with smartphones at home have no access to the device. Among younger children, this scenario effects 40%.

iv.The rise in enrollment in government schools is nearly uniform across age groups and grades. In the 7-10 age group among boys and girls, the share has risen from 60% to 68% and 68% to 72% respectively.

v.About 73.1% school respondents have received training for implementation of COVID prevention measures in 2021.
Recent Related News
In accordance with the National Statistical Office (NSO), Ministry of Statistics and Programme Implementation, ‘Situation Assessment of Agricultural Households and Land Holdings of Households in Rural India, 2019’ released on September 10, 2021, more than half of India’s agricultural households were in debt, with an average outstanding of Rs 74,121 in 2018 as compared to Rs 47,000 in 2013, an increase of 57.7%.
About Annual Status of Education Report (ASER)
It is a nationwide survey of rural education and learning outcomes in terms of reading and arithmetic skills that has been conducted by the NGO Pratham for the last 15 years.