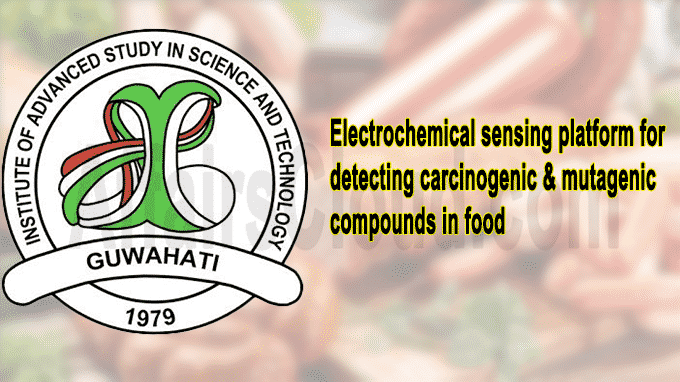 On May 22, 2020, The Institute of Advanced Study in Science and Technology(IASST) has
developed an electrochemical sensing platform to detect carcinogenic or mutagenic compound N-nitrosodimethylamine(NDMA) and N-nitrosodiethanolamine(NDEA) that are found in food items like cured meat, bacon, some cheese, and low-fat milk.

i.To alter the DNA the electrochemical biosensor platform was developed using the ability of NDMA and NDEA

iii.To synthesize CDs, a naturally derived chitosan (a natural biopolymer obtained from the shells of shrimp, lobster, and crabs) is used, which is an environmentally-friendly sustainable material.

iv.The electrochemical sensor, the electrode is formed by depositing CDs and then immobilizing bacterial DNA on them. This electrode system measures the current peak.

v.The NDMA and NDEA alters the chemical structure of DNA present in the electrode, which makes it more conducting, which results in the increased current peak. G (Guanine) of the 4 base pairs A,T,G,C is electro-chemically active and hence was predominantly used by scientists.

vi.In the presence of NDMA, guanine is modified to 6-Omethylguanine or 7-methyl guanine and with NDEA guanine changes to 8-oxoguanine to form DNA adducts.

vii.Other structurally similar chemical compounds were added to the test, these chemicals cannot alter the DNA sequence, they do not affect the structure.

It was inaugurated by Nobel Laureate Dorothy C. Hodgkin on 3rd November 1979 & was supported by the state government as its only autonomous Research & Development(R&D) institute till March 2009. The institute was taken over in March 2009 by the Ministry of Science and Technology, as one of its autonomous R&D institutes.