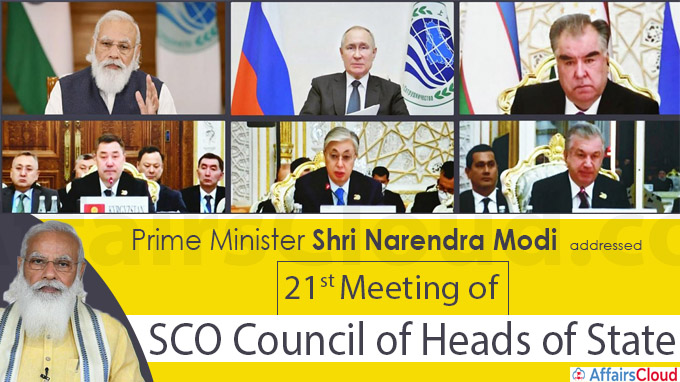 On 17th September 2021, Prime Minister Narendra Modi virtually participated in the 21st Meeting of the Council of Heads of State of the Shanghai Cooperation Organisation (SCO) that was held for the first time through hybrid format from Dushanbe, Tajikistan. During the meeting, SCO member countries adopted the ‘Dushanbe Declaration’ to promote counter terrorism & stability in Afghanistan.

i.PM discussed the problems caused by extremism in Afghanistan in the SCO region, and suggested promoting of moderation & scientific thoughts among Afghan youths.

ii.India announced to share digital technologies through open-source solutions for the development of Afghan & SCO members.

iii.The PM also suggested the importance of connectivity projects in the region for peaceful development.

iv.He also participated in the Outreach session on Afghanistan between SCO and the Collective Security Treaty Organisation (CSTO) after the SCO Summit.