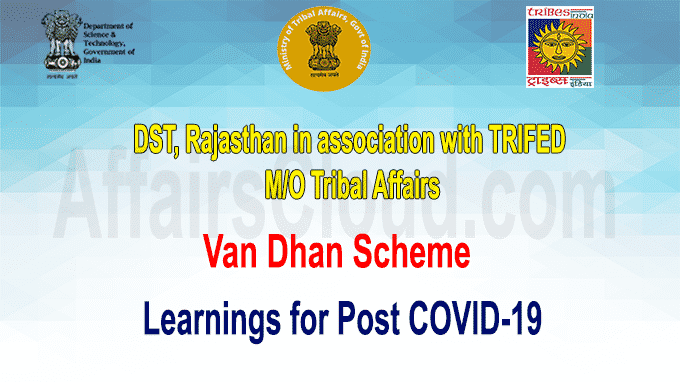 On May 26,2020 Department of Science and Technology(DST), Government of Rajasthan in association with Tribal Cooperative Marketing Development Federation of India (TRIFED), under Ministry of Tribal Affairs, Government of India have organized Webinar under Know Your Scheme-Lecture Series on “Van Dhan Yojana : Learning For Post Covid-19” to assist tribal people who were worst affected on COVID-19.

Highlights of discussion to implement:-

Initiative by TRIFED to help tribals:-

i.It is an initiative of the Ministry of Tribal Affairs and TRIFED.  It was launched on 14th April, 2018  to improve tribal incomes through value addition of tribal products.

iii.There is a focus on Digitization of dashboards, monitoring of VanDhan projects to streamline the flow of information, track progress and enable quick submission of proposals under the scheme.

TRIFOOD– This Scheme is a joint initiative of M/O of Food Processing Industry, M/O Tribal Affairs and TRIFED.

About TRIFED:
It came into existence in 1987 & is a national-level apex organization functioning under the administrative control of the M/O Tribal Affairs. It has a network of 13 Regional Offices located at various places in the country.
Head Office– New Delhi, India
Managing Director– Pravir Krishna