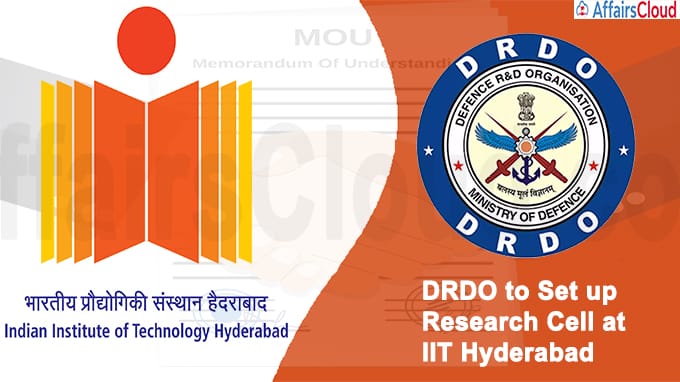 Defence Research and Development Organisation(DRDO) will establish a research cell at Indian Institute of Technology Hyderabad(IIT-H), ‘DRDO – IIT-H Research Cell’ to meet the future defence technological requirements of the country. The research cell is established as an extension of the DRDO Research and Innovation Centre (RIC), Chennai.

i.An MoU was signed during a virtual event organized at the DRDO DG-Missiles and Strategic Systems (MSS) Office in Hyderabad on July 3 to establish the research cell.

i.The research cell will undertake basic and applied research programs in identified technology areas. It will ensure seamless execution of different projects between DRDO and IIT-H.

ii.It is expected to become a Centre of Excellence for conducting scientific and applied research in advanced technologies for defence.

iii.It will help to grasp resources of knowledge in the basic science and technology industries, which are interdisciplinary in nature and spread across multiple institutions.

iv.It also aids and enhances the scientific and technological aspects of the country in crucial defence technology areas.

v.It will pave way for the directed basic and applied research by involving faculty and researchers at academic institutions, technology centers and other renowned institutes which will be done through defined research programs based on their research capabilities.

Note– IIT-H has a strong research base on advanced technologies, which will strengthen the country’s growth through this cell