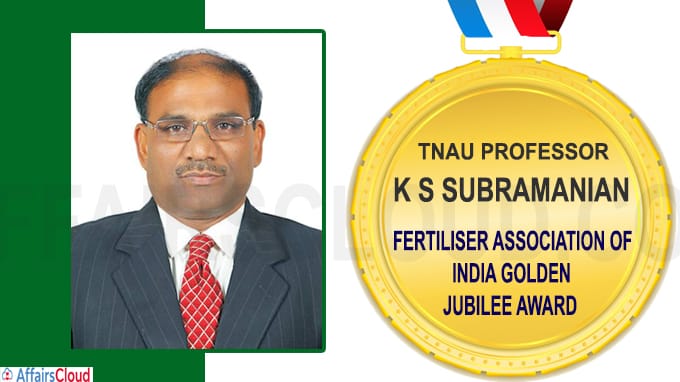 Dr. K S Subramanian, Director of Research of Tamil Nadu Agricultural University, Coimbatore, Tamil Nadu who is also a National Bank for Agriculture and Rural Development (NABARD) Chair Professor, won the Fertiliser Association of India(FAI) Golden Jubilee Award 2020 for his contribution in the field of nano-fertilisers and its role in improved use while ensuring the safety of environment.

The award will be presented at the inaugural function of FAI’s Annual Seminar on “Fertilizer and Agriculture during COVID-19” which will be held in New Delhi in December 2020.

The award comprises a cash award of Rs.1 lakh and a gold medal.

i.Dr.K S Subramanian was the founder head of the department of Nano Science & Technology in 2010.

ii.He has contributed to the development of, design and fabrication of nano-agri inputs, nano preservation of fruits, nano sensors and biosafety of nano products.

iii.He assisted the Indian Council of Agricultural Research (ICAR) in the development of a research framework of Nanotechnology Platform in Agriculture.

iv.He was one of the key members in the Regulatory Framework for the usage of agri-nano products in India.

v.He is also a member of the Research Advisory Committee (RAC) of Indian Institute of Soil Science(IISS), Nano Mission of Department of Science & Technology, Department of Biotechnology and Nano-fertilizer policy of the country.

ii.He has published 6 books on Nanotechnology.

ii.His publications are referred in the field of agricultural nanotechnology and mycorrhiza-plant interactions.

He has received more than 12 awards which includes the Commonwealth Award and Tamil Nadu Scientist Award (TANSA).

He has developed more than 15 technologies and has 2 filed patents to his credit.

The team of soil scientists of Punjab Agricultural University (PAU) have won the “FAI Golden Jubilee Award for Excellence” for their research on “Site-specific and Need-Based Management of Nitrogen Fertilizers for Crop Production Using PAU-Leaf Colour Chart”.

The International Academy of Astronautics(IAA) has announced Dr. Kailasavadivoo Sivan, Chief of Indian Space Research Organisation(ISRO) as the recipient of the 2020 Von Karman Award, the highest distinction of the IAA. The award will be presented to Dr. K. Sivan in March 2021 at Paris.

About Fertiliser Association of India(FAI):