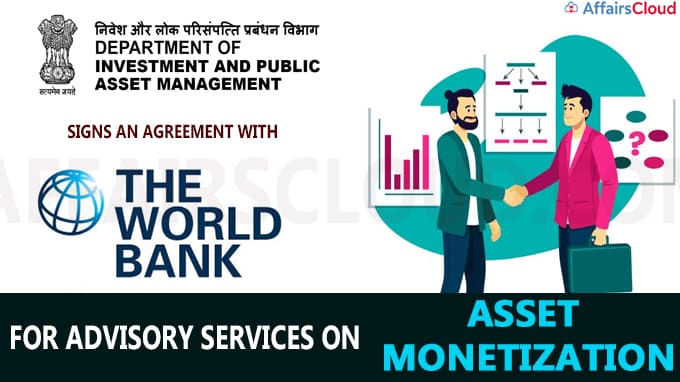 On November 16, 2020, Department of Investment and Public Asset Management (DIPAM), which handles government’s disinvestment programme, signed an agreement with the World Bank (WB) under which the latter provides advisory services to DIPAM for asset monetization. This was approved by Finance Minister Nirmala Sitharaman.

Aim of Agreement: To analyze public asset monetization in India and benchmarking DIPAM’s institutional and business models against international best practices as well as supporting development and implementation of operational guidelines.

–DIPAM is mandated with facilitating monetization of non-core assets of government CPSEs under strategic disinvestment or closure and enemy property of value of INR 100 crores and above.

–This project would facilitate and accelerate the non-core asset monetization process and help unlock the value of these unused/ marginally used assets for further investments and growth.

–The amount raised through the sale of non-core assets would form part of the disinvestment proceeds.

–The government has set a target of raising Rs 2.10 lakh crore from disinvestment in FY21. Of this, Rs 1.20 lakh crore is to be raised through Central Public Sector Enterprises (CPSEs) disinvestment.

DIPM listed four categories of assets where its framework will be applicable.

i.World Bank sanctions Rs 3 crore(approximately) for Goa to develop India’s first sand dune parks as the former has approved a proposal drafted by the Goa state biodiversity board for the same.

About Department of Investment and Public Asset Management (DIPAM):