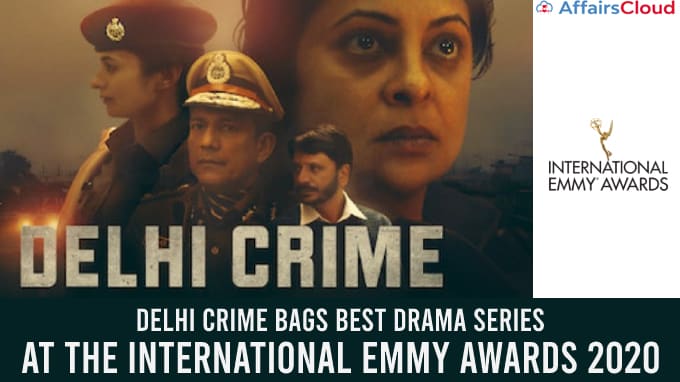 On November 23, 2020 The International Academy of Television Arts & Sciences announced the winners of the 48th International Emmy® Awards 2020  during a live ceremony hosted by actor Richard Kind in New York City, USA. Netflix’s India Original series ‘Delhi Crime’ written and directed by Richie Mehta won the award under the ‘drama series’ category. Delhi Crime wins the 1st Emmy® for a program from India.

i.The 48th International Emmy® Awards were streamed live online for the first time on iemmys.tv due to COVID-19 pandemic.

ii.The International Academy presented 1 Special Award and 12 Emmys across 11 categories, due to a tie in the Non-English Language U.S. Primetime category.

i.The seven-episode series follows the investigation of a  gang rape, where DCP Vartika Chaturvedi search for the culprits. It is based on the 2012 gangrape-murder Nirbhaya case.

ii.The series starred Shefali Shah as the DCP, and Rasika Duggal, Rajesh Railang and Adil Hussain in prominent roles.
iii.Richie Mehta also was the executive producer of the series. It was produced by Golden Karavan, a global production company.

Governor Andrew Cuomo of New York won the 2020 International Emmy Founders Award for his exceptional use of television for Public service during the COVID-19 pandemic.

13-year-old Billy Barratt who won the award  is the youngest actor ever nominated and won in the  ‘Best Performance By An Actor’ category.

i.It recognizes the excellence in television produced outside the United States and US Primetime programs produced in languages other than English in 20 categories (including Non-English Language U.S. Primetime Program).

ii.The award is given every year at the New York City with more than thousand international broadcasting, production and distribution executives

About The International Academy Of Television Arts & Sciences:

It is a membership-based organization of leading media and entertainment figures from more than 60 countries and 500 companies from all the sectors of television including internet, mobile and technology.