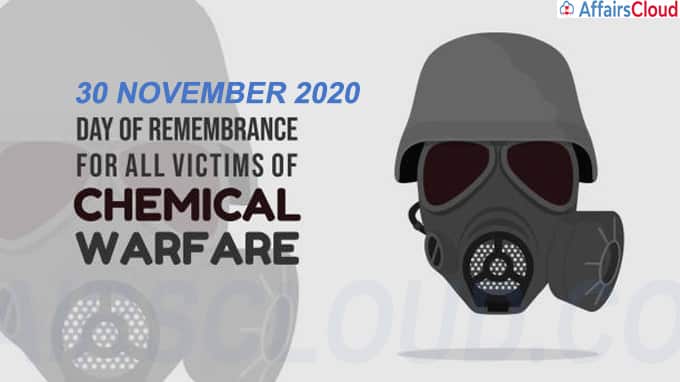 The United Nations(UN)’s Day of Remembrance for all Victims of Chemical Warfare is annually celebrated across the globe on 30th November to pay tribute to the victims of chemical warfare and to reaffirm the commitment of the Organisation for the Prohibition of Chemical Weapons (OPCW) to the elimination of the threat of chemical weapons and promote world peace, security and multilateralism.

Earlier, On November 11, 2005, during the last day of the United Nations’ Tenth Session of the Conference of the State Parties, the members of the UN officially recognised the Day of Remembrance for all Victims of Chemical Warfare, following a suggestion by Rogelio Pfirter, Director-General of the Secretariat.April 29 was chosen as the date for the event’s celebration because the Chemical Weapons Convention entered into force on that day in 1997.

Then the Day of Remembrance of all victims of chemical warfare was changed from 29th April to 30th November and the 29th April, the date on which the convention entered into force in 1997 was designated as the International Day for the Foundation of the Organisation for the Prohibition of Chemical Weapons (“OPCW Day”).

Later, At the 20th Session of the Conference of the States Parties to the Chemical Weapons Convention, in 2015, it was decided to observe the Day of Remembrance for all victims of chemical warfare on 30th November of every year or when appropriate, on the first day of the regular session of the conference.

i.Chemical weapons were used on a large scale during the first World War, which caused more than 100000 fatalities and a million casualties.

ii.These chemical weapons were not used in Europe in the 2nd World War.

iii.Following the nuclear attack, numerous countries realised that the marginal value of the chemical weapons in their hold were limited and the threat posed by these chemical weapons made the ban of these desirable.

iv.The Chemical Weapons Convention was adopted in 1993 and came into force on 29th April 1997.

i.The United Nations Secretary-General António Guterres, launched “Securing our Common Future: An Agenda for Disarmament”, with a vision of disarmament actions to support the world towards sustainable peace and security for all.

ii.The agenda for disarmament includes, the work of Secretary General with the members of the security council to build a new leadership and unity to restore the global norms against chemical weapons