We are here for you to provide the important Current Affairs September 11 2018 which have unique updates of all daily events from all newspapers such as The Hindu, The Economic Times, PIB, Times of India, India Today, Indian Express, Business Standard, all Government official websites. Our complete current affairs helps you to get more marks in Banking, insurance, UPSC, SSC, CLAT, Railway and all other competitive Exams. 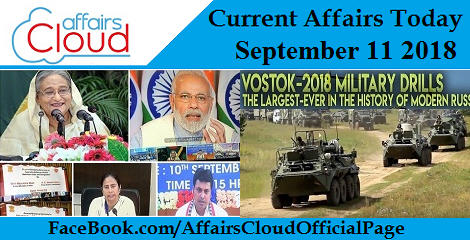 i. It is a part of NITI Aayog’s plan on ‘National Strategy for Artificial Intelligence’.
Objective:
To develop and deploy AI-led application-based research projects.
Key Points:
i. In the collaboration:

About ICTAI:
i. It would conduct advanced research to produce AI-led solutions in three important areas – healthcare, agriculture and smart mobility.
ii. It would work on the following domains of ICTAI:
Governance, fundamental research, physical infrastructure, compute and service infrastructure needs, and talent acquisition.
iii. This would in turn help in building policies and standards related to information technology such as data-storage, information security, privacy, and ethics for data capture and use.
iv. Another key area of focus is collaboration with industries and startups to produce more AI based technologies and increase skilled talent.
v. The learning and best practices developed through this model ICTAI will be used by NITI Aayog to set up the future ICTAIs across country.
NITI Aayog:
♦ Chairman: Narendra Modi.
♦ CEO: Amitabh Kant.
Intel:
♦ Headquarters: California, USA.
♦ CEO: Robert H. Swan.
Tata Institute of Fundamental Research (TIFR):
♦ Headquarters: Mumbai. Objective:
To enable Corporates and PSUs to contribute to upgradation through Corporate Social Responsibility funds.
Key Points:
i. The Webportal is :  www.railsahyog.in
ii. This has been made for the Indian Railway stations for upgrading its infrastructure, technology, hygiene among other things.
iii. Corporates and PSUs willing to contribute can register themselves in the portal.
iv. The shortlisted applicants would deposit their funds with Railways/nominated agencies like RITES/RAILTEL etc.
v. Projects to be funded under this are:

181:  helpline for women in distress launched by Goa government
On September 11, 2018, the Women and Child Development ministry of Goa launched a helpline service for women in distress in the state.
i. The helpline number is : 181 and will be operated by GVK-EMRI along with the ministry.
ii. It would provide counselling, guidance, information, as well as deal with cases of domestic violence.
iii. It will help in solving crimes against women more efficiently.
Other News:
i. The government also partnered with Gomantak Lokseva Trust Mahilashram, Assagao, where rescued women would be given asylum.
ii. The Goa State Infrastructure Development Corporation (GSIC) has invested Rs. 8 crore for the construction of a centralised location at Merces for the North Goa and South Goa child welfare committees and the ministry of woman and child development.
♦ Director of Women and Child Development: Deepak Dessai.
GOA:
♦ Chief Minister: Manohar Parrikar.
♦ Governor: Mridula Sinha.
♦ Lakes: Carambolim Lake, Mayem Lake, Sarzora Lake.
♦ National Parks/Bird and Wildlife Sanctuaries: Salim Ali Bird Sanctuary, Bondla Wildlife Sanctuary, Cotigao Wildlife Sanctuary, Mhadei Wildlife Sanctuary, Netravali Wildlife Sanctuary.

Ethanol plant: Haryana Government inks MoU with IOC to stop straw burning.
On September 11, 2018, the Haryana government signed a Memorandum of Understanding (MoU) with Indian Oil Corporation (IOCL) to set up an ethanol plant at village Bohali in Panipat. 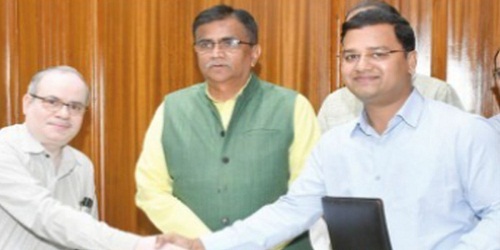 i. The Mou was signed by:

ii. It would be valid for a period of one year.
iii. The project would have a cost of over Rs 900 crore.
iv. It would have a capacity of 100 kilolitres of ethanol per day which will prevent straw burning and manage crop residue.
v. Raw fuel to the plant would be provided by 10 cooperative and three private sugar mills in Haryana.
Haryana:
♦ Capital: Chandigarh.
♦ Chief Minister:  Manohar Lal Khattar.
♦ Governor: Satyadev Narayan Arya
♦ National Parks: Sultanpur National Park, Kalesar National Park.
Nickname:
♦ Gurugram: Millennium city of India,
♦ Bhiwani: Mini Cuba. 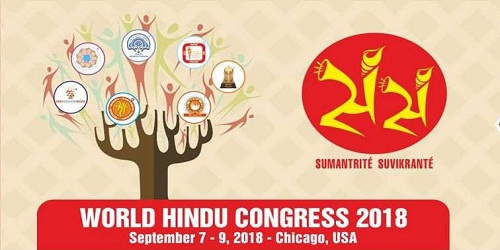 i. This has been organized on the occasion of 125th Anniversary of Swami Vivekananda’s Historic Speech at the Parliament of the World’s Religions in 1893.
Highlights:
i. On September 8, 2018,  the VP participated in a programme organized by the 14 Telugu Associations of the US at the Community Christian Church, Plainfield of Greater Chicago.
ii. On September 9, 2018, the Vice President met the Organizers of World Hindu Congress and participated in the 2nd World Hindu Congress 2018.
He also addressed the Indian Diaspora in the US.
About the The World Hindu Congress:
i. The objective of the World Hindu Congress is connect, share ideas, inspire one another, and impact the common good.
ii. It is held once every four years and has seven parallel conferences.
iii. The 2018 WHC was organized by the World Hindu Foundation (WHF).
iv. The theme of the WHC 2018 was: Sumantrite Suvikrante – THINK COLLECTIVELY, ACHIEVE VALIANTLY.
v. WHC Guiding Philosophy was :Yato Dharmas tato Jaya — Where there is Dharma, there is victory.
Addressal of Indian Community at the WHC:
The VP addressed the Indian community shared his opinions on: 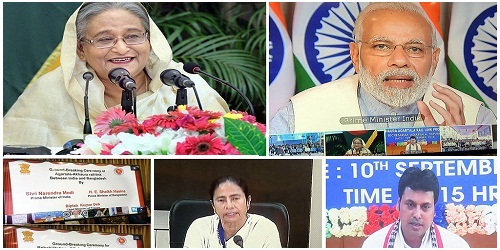 Key Points:
i. The 3 projects are: 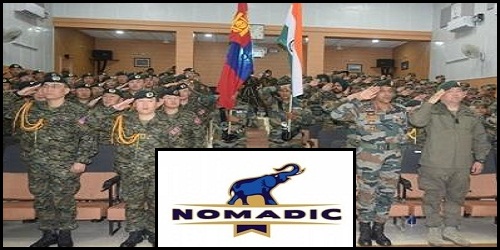 Objective:
To strengthen the partnership between Indian Army and Mongolian Armed Forces.
Key Points:
i. The Focus of the exercise would be in joint counter insurgency and counter terrorist operations in rural and urban scenario under United Nations mandate.
ii. The Indian contingent comprises of 17 PUNJAB Regimen while the Mongolian contingent is represented by Unit 084 of the Mongolian Armed Forces.
Nomadic Elephant exercise:
♦ Commencement year: 2006.
Mongolia:
♦ Capital: Ullanbaatar.
♦ Currency: Mongolian togrog.
♦ President: Khaltmaagiin Battulga

Vostok 2018- the largest exercise in four decades held in Russia
On September 11, 2018, the 5day Vostok 2018 commenced in central and eastern Russia. i. It is the dubbed as the largest military drills in almost four decades since Zapad held by the Soviet Union in 1981.
ii. It will involve nearly 300,000 troops, more than 1,000 planes, helicopters and drones, and up to 36,000 tanks and 80 ships.
iii. It would also include contingents from China and Mongolia.
Russia:
♦ Capital: Moscow.
♦ Currency: Russian Ruble.
♦ President: Vladmir Putin.
♦ India and Russia Military exercise name: INDRA.

ICRA downgraded loan, debenture rating of IL&FS to ‘default Risk’ of BB and A4
On September 9, 2018, Rating agency ICRA downgraded loan and debentures of infrastructure financing firm Infrastructure Leasing & Financial Services to ‘default risk’ .
i. This was done due to liquidity pressure on the group owing to sizeable repayment obligations.
ii. Also the long-term rating of IL&FS’ Rs 5,225 crore non-convertible debenture programme and the Rs 350 crore term loans has been cut to ‘BB’ from ‘AA+’.
iii. The short-term rating for the Rs.4000 & Rs 2,500 crore commercial paper programme has been lowered to ‘A4’ from ‘A1+’.
iv. ’BB’ stands for moderate risk of default and ‘A4’ stands for high credit risk.
IL&FS:
♦ Headquarters: Mumbai.
♦ CEO: Arun K. Saha.
ICRA:
♦ CEO: Naresh Takkar.
♦ Non-Executive Chairman: Arun Duggal.
♦ Headquarters: India.

SEBI panel headed by HR Khan proposed relaxing of rules for investment in FPIs by NRIs
On September 11, 2018, SEBI to relax foreign fund rules initiated a public consultation process for finalising the new guidelines on KYC and beneficial owner identification.
i. This was done on the recommendation of a panel headed by former RBI Deputy (rpt) Deputy Governor H R Khan.
ii. According to the recommendations:

iii. FPIs will be given 6 months to comply to new rules and non-compliant investors can be given further 180 days to stop their operations.
Background:
In April 2018, SEBI proposed new norms on KYC and beneficial owner identification, the deadline for which was extended later by two months till December 2018.
The proposed move was aimed at checking any possible re-routing of funds of Indians an NRIs through overseas locations such as Mauritius, Singapore and Dubai. Click here to read more
SEBI:
♦ Chairman: Shri Ajay Tyagi.
♦ Founded: 12 April 1992.
♦ Headquarters: Mumbai.

Rs 9785 crore approved by NTPC for investment in 1,320 MW expansion at Talcher plant in Odisha
On September 11, 2018, NTPC’s board has approved an investment of Rs 9,785 crore for the 1,320 MW Stage-III expansion of its Talcher plant in Angul district of Odisha.
i. Presently, the plant has four units of 60 MW and two units of 110 MW and the expansion will include 2×660 MW.
ii. It is a part of NTPC’s vision of being 130 GW company by 2032.
iii. The Talcher plant, one of the oldest and top performing power stations in the country.
iv. Other projects totalling to 20,000 MW capacity across the country are underway.
NTPC:
The NTPC Group has total capacity of 53,651 MW from:

Apsara – U Reactor Becomes Operational at Bhabha Atomic Research Centre (BARC), Trombay
On 10th September 2018, Apsara- U (upgraded) reactor became operational at Bhabha Atomic Research Centre (BARC), at Trombay, in Mumbai, Maharashtra.
Apsara – U Reactor:
i. Apsara, the first research reactor in Asia, became operational in BARC, Trombay, in August 1956. It was shut down in 2009, after more than 50 years of service.
ii. Apsara- U (upgraded) reactor is a swimming pool type research reactor, with higher capacity.
iii. It has been developed indigenously. It uses plate type dispersion fuel elements made of Low Enriched Uranium (LEU).
iv. Since it has higher neutron flux, it will increase indigenous production of radio-isotopes for medical application by nearly 50 %.
v. It will be used for research in nuclear physics, material science and radiation shielding.
About Bhabha Atomic Research Centre (BARC):
♦ Director – Mr. K. N. Vyas
♦ Headquarters‎ – ‎Trombay, Mumbai, Maharashtra 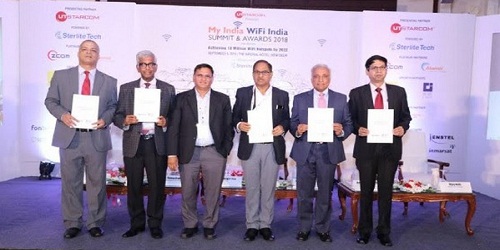 About the Summit and Award event:
i. This event was organized by DigiAnalysys in New Delhi.
ii. It was themed as: “Achieving 10 million WiFi Hotspots by 2018″ .
iii. It aimed at planning progressive strategy and technology roadmap for growth of WiFi eco-system in India.
iv. The summit spread across five sessions. They were :

v. Additonally, a White Paper On WiFi Liberalisation jointly compiled by Broadband India Forum (BIF) and DigiAnalysys was released
Analysis as per DigiAnalysys:
According to the study of the organization: Key Points:
i. Arpinder Singh, who is a 25-year-old triple jumper, represented the Asia-Pacific team in the IAAF Continental Cup 2018.
ii. He won bronze medal in the men’s triple jump event with a jump of 16.59m. Reigning Olympic and world champion Christian Taylor of the United States, won gold medal with a jump of 17.59 m.
iii. This is the first time an Indian has won a medal in the Continental Cup which was known as the IAAF World Cup before 2010.
iv. In men’s javelin throw, reigning Commonwealth Games and Asian Games champion Neeraj Chopra from India, finished in 6th position.
About IAAF Continental Cup 2018:
♦ Dates – 8–9 September 2018
♦ Location – Ostrava, Czech Republic
♦ Type – international track and field sporting event

i. The booklet highlighted the role and activities assisted by National Cooperative Development Corporation (NCDC).