We are here for you to provide the important current affairs January 20 2018 which have unique updates of all daily events from all newspapers such as The Hindu, The Economic Times, PIB, Times of India, India Today, Indian Express, Business Standard, all Government official websites. Our complete current affairs helps you to get more marks in Banking, insurance, UPSC, SSC, CLAT, Railway and all other competitive Exams. 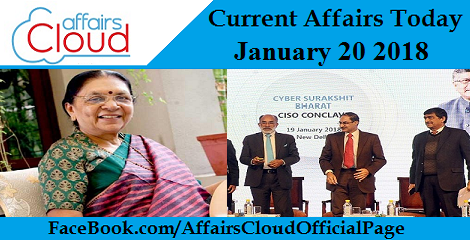 25th GST Council meet held in New Delhi
25th meeting of the Goods and Services Tax (GST) Council was held in New Delhi on January 18, 2018.
GST Meeting:
i. The meeting was chaired by Union Finance Minister, Arun Jaitley
ii .Highlight of the 25th GST Council meet was the reduction of tax rates on 29 goods and 53 categories of service.
iii .The new rates will be applicable from January 25, 2018.…………………Click Here to Read more

Government announces commencement of Liveability Index Programme in 116 cities
On January 19, 2018, Union Minister of State (Independent Charge) for Housing and Urban Affairs Hardeep S Puri, announced commencement of the Liveability Index Programme in 116 Indian cities.
i. Goal of assessing the cities on liveability standards and thereafter compiling the index rankings is to make Indian cities more ‘Liveable’.
ii. This programme would be funded by the World Bank.
iii. The list includes the identified Smart Cities and few more cities with a population of over 1 million.……………………………………Click Here to Read more About Cyber Surakshit Bharat initiative:
i. Objective of this initiative is to spread awareness about cybercrime and to train and prepare Chief Information Security Officers (CISOs) and frontline IT staff of all government departments to effectively deal and neutralise cyber threats.
ii. This initiative has been launched in association with National e-Governance Division (NeGD) and leading companies of Information Technology Industry.
iii. Microsoft, Intel, Redhat, Wipro and Dimension Data are the founding partners while Organisations such as Cert-In, NIC, CISCO, NASSCOM and the FIDO Alliance, and consultancy firms Deloitte and EY are knowledge partners for this initiative.
iv. Cyber Surakshit Bharat initiative is the first public-private partnership in the area of cyber security.
v. An awareness programme on the importance of cybersecurity will be conducted,  followed by a series of workshops on best practices. During the workshops, CISOs and IT staff will be familiarised with usage of cybersecurity health tool kit to manage and mitigate cyber threats.

Sushma Swaraj inaugurates Puducherry’s first POPSK at Karaikal
On January 19, 2018, Union Minister for External Affairs, Sushma Swaraj inaugurated Post Office Passport Seva Kendra (POPSK) at Karaikal in the Union Territory (UT) of Puducherry.
Details about POPSK at Karaikal:
i. This  POPSK is expected to benefit people of Karaikal, as now they can avail passport related services without having to travel to Puducherry.
ii. POPSK is a joint initiative by the Ministry of External Affairs (India) (MEA) and the Department of Posts (DoP), where the Head Post Offices (HPO) and post offices across India will be utilized as Post Office Passport Seva Kendra for delivering passport related services to the citizens.
iii. Objective of this initiative is to ensure wider coverage of passport related services.
iv. This initiative was started in January 2017.  POPSK at Karaikal is the 60th POPSK under this initiative.

Odisha launches e-Hospital Management system “OeHMIS”
On January 19, 2018, Odisha State Government launched Odisha e-Hospital Management Information System (OeHMIS), an online platform which hosts all clinical parameters of patients and reporting of performance criteria of hospitals.
About OeHMIS:
i. Through OeHIMS, patients can be registered online. Besides, individual electronic health records can be viewed and downloaded online through web portal or mobile application.
ii. Technical support for OeHMIS is being provided by Centre for the Development of Advanced Computing (CDAC).
iii. Odisha State Government has allocated Rs. 14.16 crore for implementation of this project.
iv. Pilot projects of OeHMIS have been launched at Capital Hospital, Bhubaneswar and SCB Medical College and Hospital, Cuttack. It will be extended to other health institutions in near future.
Quick Facts about Odisha
♦ Capital – Bhubaneswar
♦ Current Governor – S.C. Jamir
♦ Current Chief Minister – Naveen Patnaik
♦ Important National Park – Bhitarkanika National Park

Compensation for martyrs:
i. At the launch event, Mr. Singh stated that no amount of monetary compensations can be enough for those who lay their lives in the line of duty.
ii. Earlier, Mr. Singh had stated that Central Government was making all efforts to ensure that the kin of martyred troops are provided a compensation of not less than Rs one crore.
iii. As per the current norms, family of a slain soldier of Central Armed Police Forces (CAPFs) gets about Rs.50-60 lakh compensation.
iv. It is to be noted that in April 2017,  Mr. Singh had launched bharatkeveer.gov.in web portal that enables common people to make monetary donations (up to combined upper limit of Rs. 15 lakh for each martyr) to families of paramilitary troops killed in action.

100 divyang-friendly websites launched to empower disabled
On Jan 19 2017, during the occasion of ‘National Conference on Improving Accessibility’, Justice and Empowerment Minister Thaawarchand Gehlot launched 100 accessible websites for Divyangs to empower the disabled persons in all over the country.
i.Divyang-friendly websites were launched especially for visually impaired, use features such as screen readers and screen magnifiers, which can relay website content to the user in audio format.
ii.Now 100 accessible websites are made accessible under the project. Minister also stated that another 900 such websites will be launched in a phased manner.

Pact signed for research incubator at IIT Bhubaneswar
On Jan.20 2017, The Odisha government has signed an agreement to setting up an incubator for promoting research with Software Technology Park of India (STPI), philanthropist Sushmita Bagchi, and IIT Bhubaneswar in Bhubaneswar , Odisha.
i.As per the above agreement ,The Centre of Excellence for Virtual & Augmented RealityÂ” (VARCoE) will be set up at the campus of IIT, Bhubaneswar and it will become a landmark initiative for promoting research, technology incubation and product development in the country.
ii.Odisha state government has contributed the cheque of Rs 2.5 crore to Director, IIT, Bhubaneswar for this initiative. Susmita Bagchi, a philanthropist, also  contributed Rs 2.5 crore to Director of IIT.
Key Facts about Odisha:-
i.It is also known as “Utkal” which comes in National Anthem. Every April 1st is celebrated as “Utkal Diwas” which is the foundation day of Odisha.
ii.One of the biggestChilika Lake and India’s biggest and world’s second biggest coastal lagoon Brackish Water Lagoon were situated in Odisha.
iii.The One and only White Tiger Safari in the world & The largest Lion Safari of India are situated in Nandankanan National Park, Bhubaneswar.

Maitre-2 bus services to connect India and Bangladesh
Maitre-2, a second passenger bus to Kolkata via Dhaka was flagged off from Agartala, Tripura on January 19, 2018. More Information about Maitre-2 bus service:
i. The bus was flagged off by Tripura MLA Ratan Das  and Tripura Road Transport Corporation Chairman Rajendra Reang.
ii. This bus service is expected to strengthen trans-border relationship between India and Bangladesh and enhance people-to-people connectivity.
iii. The distance between Kolkata and Agartala is about 1650 km, by Indian route. This distance is cut to 515 km if the buses go through Dhaka.
iv. Maitre-2 bus will run twice a week. It will take 20 hours for reaching the destinations. Fare for this bus service has been fixed at Rs. 2200.

Mauritius largest FDI source in 2016-17: RBI
According to Census on Foreign Liabilities and Assets of Indian Direct Investment Companies 2016-17, released by Reserve Bank of India (RBI) on January 19, 2018, Mauritius was the largest source of foreign investment (FDI) in India during 2016-17. Sources of FDI in India:
i. This census provides comprehensive information on the market value of foreign liabilities (on account of FDI) and assets (on account of overseas direct investment, ODI  and other investments) of Indian companies. Indian companies’ investment in a foreign entity by way of contribution to the capital or subscription to the Memorandum of Association is referred to as ODI.
ii. Total 18667 companies participated in this census. Out of these, 17020 companies had FDI/overseas direct investment (ODI) in their balance sheets in March 2017.
iii. The Census revealed that 80 per cent of the 15169 companies that reported inward FDI were subsidiaries of foreign companies.
iv. Mauritius, with 21.8 per cent share was the largest source of FDI in India, while Singapore with 19.7 per cent was the major ODI destination.
FDI & ODI – Top 4 Countries Gujarat’s first woman former Chief Minister Anandiben Patel has been appointed Governor of Madhya Pradesh.
i.Patel had joined BJP as the president of party’s women wing in 1986. She succeeded PM Narendra Modi when he moved on to Delhi as the CM of Gujarat.
ii.She was elected to the Rajya Sabha in 1994. In 1998, she became education minister of Gujarat. She retained the portfolio after being re-elected in 2002 from Patan. In 2012, Patel shifted Ghatlodia in Ahmedabad.

FM Arun Jaitley launches National Corporate Social Responsibility Data Portal
On Jan 19 2017, Union Finance Minister Arun Jaitley launched the National Corporate Social Responsibility Data Portal in New Delhi.
i.The portal will able to broadcast CSR related data to the general public. It will be able to assist in social audits or projects, making Indian corporate sector socially responsible.
ii.At the launch of National CSR Data Portal and Corporate Data Portal of the MCA , Arun Jaitley also stated that because of online availability of data, it has become easier to dissect any impropriety, including that of funds being channeled through shell companies.
iii.From proposing direct development sector, interactive reports and depth search for individual company contribution, the portal is not only a knowledge based but will also act as a catalyst for change.

Jammu and Kashmir to host international martial arts event
During the first week of October 2018 ,  Jammu and Kashmir will host its first maiden international martial arts games event in the in the summer capital Srinagar.
i.Rameez Khan, general secretary of J-K State KiAiDo Association, the organisers of the event stated that more than 15 countries were expected to participate.
ii.‘Asian Martial Arts Games’ will provide a platform to the young martial art players of the state toperform and gaining experience from different countries’ players.
Key Facts about Jammu & Kashmir
i.K2  is the highest peak in India and also the second highest in the world after Mt. Everest .
ii.Dhumal and Rouff are traditional folk dances of Kashmir valley.Dhumal is for men and Rouff is for women.
iii.Dal Lake is one of the important lake which situated in Sri Nagar City. i.On Jan 19 2017, Former Speaker of the Madhya Pradesh assembly and Congress leader Shriniwas Tiwari ,93 passed away in a hospital in New Delhi.
ii.Tiwari, popularly known as “White Tiger”. He is survived by his MLA son, Sunderlal Tiwari.

Senior journalist Anindya Sengupta dead
Senior journalist and Indian Journalists Association Secretary Anindya Sengupta,52 has passed away due to cancer.
i.Sengupta started his career with Bengali newspaper ‘Bartaman’, and then worked with English dailies ‘The Statesman’ and ‘The Telegraph’.
ii.He had served as the secretary of Kolkata Press Club for six terms, and was presently the secretary of the Indian Journalists Association (IJA).

President launches ‘The Heartfulness Way’ – book on self development in Delhi On Jan 19 2017,President Ram Nath Kovind launched a book on heartfulness techniques and principles titled ‘The Heartfulness Way’.
i.The author of the book is Kamlesh Patel, widely known as Daaji, the fourth Global Guide of Heartfulness, and Joshua Pollock, a heartfulness trainer and practitioner.
ii.This book guaranteed to be a treat for those who are curious about what is heartfulness and how it can change our day-to-day lives. It was launched by Commerce and Industries Minister Suresh Prabhu.