Assam Finance Minister Himanta Biswa Sarma Presents Rs 2,350 crore Deficit Budget 2017-18
i. The Assam Finance Minister Himanta Biswa Sarma presented the state Budget for the session 2017-18 on February 7, 2017 in the state assembly.The budget was based on the theme “Resurgent Assam”.
ii. As per the Minister the state Budget 2017-18 was Rs. 2,349.79 crore deficit Budget. The budget presented merged Plan and Non-Plan expenditures.
iii. The Government has redefined the role of Planning & Development Department. The department has been rechristened to the Department for Development and Transformation of Assam (DDTA).
iv. The Budget Estimates of 2017-18, proposes to have a receipt of Rs 84,732.16 crore under consolidated fund of the state. Out of this, Rs 70,719.61 crore is on Revenue account and Rs 14,012.55 crore is under Capital account.

India’s first social innovation centre Launched in Nizamabad by Telanagana Government
i. The Telangana government launched India’s first social innovation centre the ‘Kakatiya Hub For Social Innovation’ in Nizamabad on February 6, 2017.
ii .The launch was announced at the one-day Development Dialogue, an international social entrepreneurship ecosystem conference hosted by Kakatiya Sandbox.
iii. The social hub has been funded by the Telangana government and will be implemented through Kakatiya Sandbox which is a centre that encourages entrepreneurship and innovation modelled after Deshpande Foundation’s Hubli Sandbox.
iv. The Kakatiya Hub would function like a rural incubator to encourage entrepreneurship at the grassroots level to promote the people in rural areas to become problem solvers by providing them structured guidance and necessary ecosystem.

India & Austria Signs Protocol to Amend Bilateral Taxation Treaty
i. India and Austria signed a protocol on February 6, 2017 to amend the existing bilateral taxation treaty for Avoidance of Double Taxation and the Prevention of Fiscal Evasion.
ii. The protocol was signed between Central Board of Direct Taxes (CBDT) Chairman Sushil Chandra on behalf of India and Embassy of Austria Charge d’ Affaires Georg Zehetner on 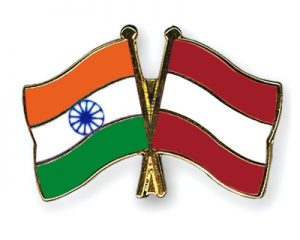 behalf of Austria.
iii. The protocol will broaden the scope of the existing framework of exchange of tax related information. This will help to curb tax evasion and tax avoidance between the two nations as well as enable mutual assistance in relation to collecting taxes.
Austria
♦ Capital: Vienna
♦ Currency: Euro

International Conference & Exhibition on Terrestrial & Satellite Broadcasting held in New Delhi
i .The 23rd session of the International Conference & Exhibition on Terrestrial & Satellite Broadcasting was held at the Leela Ambience Convention Hotel, New Delhi from February 2- February 4, 2017.
ii .The event was organized by the Broadcast Engineering Society (India).
iii. The theme of the event was Hybrid Technologies in Broadcasting – New Opportunities.
iv. Over 300 companies from 25 countries participate to display their products in BES EXPO 2017.
v. The trade show displayed products of the Telecom & Equipment industry to promote advancement of knowledge and practices of broadcasting in the field of Radio, Television and other media.

17th session of BIMSTEC Senior Officials’ Meeting Held in Kathmandu
i. The 17th session of the senior officials’ meeting of the BIMSTEC was held on February 7, 2017 in Kathmandu.
ii. The delegates of the seven member nations attended the meeting to review the progress made by the Bay of Bengal Initiative for Multi-Sectoral Technical and Economic Cooperation (BIMSTEC).
iii .Besides, the member countries recommended the future course of action to strengthen regional cooperation among the group.
iv. The session of the BIMSTEC-SOM was chaired by Shanker Das Bairagi, Foreign Secretary and Head of Nepali Delegation. India was led by Secretary (East) Ms. Preeti Saran.
v. The meeting adopted a report on various activities of the group. The date for the 4th BIMSTEC Summit to be held in Nepal in 2017 was also discussed during the meeting.
vi. Presently, the BIMSTEC is chaired by Nepal. It was founded in 1997 to bring together Nepal, Bangladesh, India, Myanmar, Thailand and Sri Lanka.
4th BIMSTEC Summit to be Held in Nepal in 2017
i. The Prime Minister of Nepal, Pushpa Kamal Dahal informed during the 17th BIMSTEC-SOM meeting in Kathmandu on February 7, 2017 that the 4th BIMSTEC Summit would be hosted by Nepal in 2017.
ii. Earlier in 2016, the 4th Summit was scheduled to be held in Nepal, but due to some political reasons, Kathmandu was unable to host the event last year.
iii. Besides, being the head of the group, its Nepal turn to host the Summit. 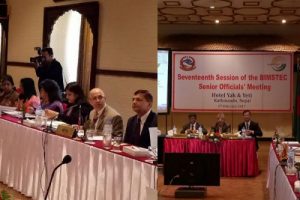 iv. As per the statement by the PM’s Secretariat, the agenda for the summit would include connectivity, energy and economic development.
Nepal
♦ Capital: Kathmandu
♦ Currency: Nepalese rupee
♦ Prime minister: Pushpa Kamal Dahal
♦ President: Bidhya Devi Bhandari

Israel Passes Law Legalising 4000 Settlements in Occupied West Bank
i. Israel passed a controversial law retroactively on February 6, 2017 to legalize about 4,000 settler homes built on privately owned Palestinian land in the occupied West Bank.
ii. The law was passed by 60 votes to 52. However it had raised international concern and Palestinian anger.
iii. The law states that the original Palestinian landowners will be compensated with money or alternative land.
iv .The Palestinian officials have denounced the law saying it legalised land theft. Besides, Israel’s attorney-general has also said it is unconstitutional.
Israel
♦ Capital: Jerusalem
♦ Currency: Israeli new shekel
♦ President: Reuven Rivlin
♦ Prime minister: Benjamin Netanyahu

China becomes world’s largest producer of solar power
i. China has surpassed Germany to become the world’s largest producer of solar energy after nearly doubling its installed photovoltaic capacity in 2016.
ii. With the increased capacity, China generated 66.2 billion kilowatt-hours of energy last year, which however accounted for only 1% of its electrical output. The country further plans to double its current solar energy capacity by 2020.

PNB Housing Finance limited & CREDAI-West Bengal Signs MoU to train construction workers in West Bengal
i. The PNB Housing Finance Limited (PNBHFL) and CREDAI West Bengal, has signed an MoU on February 6, 2017, wherein CREDAI-Bengal would train 1000 construction workers in Kolkata and nearby villages.
ii. The MoU aims to address the need to speed up the construction pace for quicker delivery and hand-overs.
iii. For providing the training CREDAI-Bengal would set up permanent skill development centres in Medinipur and Murshidabad. These places have huge concentration of construction workers.
iv. Half of the training cost would be borne by the West Bengal State Government and PNBHFL while remaining half would be borne by the developer of the construction site from where workers would be trained.
v. CREDAI would provide training that would include both ‘Classroom’ and On the job training’. It will provide training in collaboration with National Skill Development council Bengal.
vi .The training will benefit the unskilled labour in various technical aspects of construction to address their skill deficit in construction to help them in securing a better future and also pace up projects with appropriate skill inputs.
vii. Apart from technical training, soft skill trainings would also be imparted to focus on the social & behavioural habits of the trainees, including health, sanitation and safety to bring significant improvements in their way of life.

IDFC Bank, IndiaLends tie-up for loan services to 1st timers
i. Private sector lender IDFC Bank has collaborated with fintech startup IndiaLends to enable first time borrowers who do not have a credit history to take loans.
ii. Loan requests by salaried applicants without credit history will now be processed on a real time basis. The unique solution is being offered through a tie-up with IndiaLends, a financial technology startup. 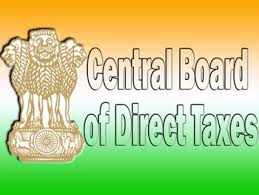 ii .The APAs would provide certainty to taxpayers about transfer pricing by specifying the methods of pricing and determining the prices of international transactions in advance.
iii. The four APAs signed belong to the Manufacturing, Financial and Information Technology sectors of the economy. Besides, the international transactions covered in these agreements include Contract Manufacturing, IT Enabled Services and Software Development Services.
iv. Now the total number of APAs entered into by the CBDT has reached 130 including 8 bilateral APAs and 122 Unilateral APAs. In the current fiscal year a total of 66 APAs have been entered into and the CBDT expects more such APAs to be signed before the next fiscal starts.

Arunachal Pradesh Launches ‘Arunachal Civil Service Awards’
i. The state government of Arunachal Pradesh launched the Arunachal Civil Service Awards on February 6, 2017 in a bid to encourage good governance in the state.
ii. Through the award, the government aims to improve the work culture and boost the morale of government employees by recognising their hard work and innovation.
iii. The award consists of a medal, a scroll and cash awards of Rs 1 lakh for an individual and Rs 5 lakh for an organization or a group.
iv. Some of the areas for which the award will be given are:
1.Civil servants and government employees who make public service delivery systems efficient and corruption free.
2.Mission mode implementation of schemes prioritized by the state and central government
3.Extraordinary performance in situations like floods, earthquakes
4.Setting high standards of leadership quality, improving employees motivation and setting

Odisha Census by Forest Department Sighted 181 Irrawaddy dolphins
i. According to a new census carried out by the Odisha State Forest and Environment department on January 20, 2017 in, the team has sighted as many as 181 endangered Irrawaddy dolphins in the state. 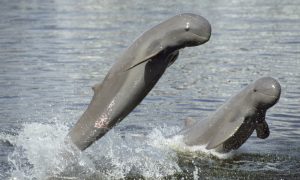 IAAF Bans Russia From 2017 London World Athletics Championships
i. The International Association of Athletics Federations (IAAF), the World Governing Body for Track and Field events, on February 6, 2017 informed that Russia has been barred from the 2017 summer World Athletics Championships in London.
ii. Russia has been barred from international competition since November 2015 following a damaging report alleging that state-sponsored doping was prevailing in the country.
iii. Further, the ban was extended in March 2016 and again in June 2016, preventing Russia’s athletes from competing at the Rio Olympics.
iv. The country again has been banned until November 2017, after recommendations made by the IAAF task force investigating Russia’s efforts at reform following a series of doping scandals recommended
International Association of Athletics Federations (IAAF)
♦ IAAF is the international governing body for the sport of athletics. It was founded as the International Amateur Athletic Federation.
♦ President: Sebastian Coe
♦ Founded: 17 July 1912
♦ Headquarter: Monaco 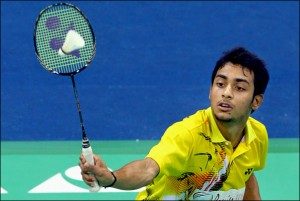 Freedom fighter Racharla Samrajyam Dies at 98
i. Freedom Fighter Racharla Samrajyam, died on February 6, 2017 in Visakhapatanam. She was 98.
ii. Samrajyam was born on April 26, 1919 at Rajahmundry, Andhra Pradesh.  She was the younger sister of the social reformer Gora.
iii. In 1942, while undergoing her Hindi Pracharak training at Anantapur, she was inspired by the Quit India Movement. Therefore, she quit the training programme and joined the Quit India Movement.
iv. She received the ‘Tarmra Patra’ from the Government of India in 1972. 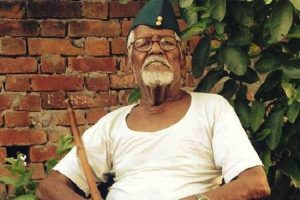 I&B Minister to release annual book ‘India-2017’ & ‘Bharat-2017’
i. Information and Broadcasting Minister M. Venkaiah Naidu will release the annual year book ‘India-2017’ and ‘Bharat-2017’ at a function in New Delhi on 6th February 2017. Minister of State for Information and Broadcasting Col. Rajyavardhan Rathore will also be present on the occasion.
ii. These books give comprehensive information about the country and various States and Union Territories including functioning of the Government and the economy.
iii. It also provides detailed information on various schemes and projects of Government and its various departments. It is particularly important for competitive exams.
iv. This yearbook is published annually by the Publications Division, a media unit of the Ministry of Information and Broadcasting.