We are here for you to provide the important current affairs December 22 2017 which have unique updates of all daily events from all newspapers such as The Hindu, The Economic Times, PIB, Times of India, India Today, Indian Express, Business Standard, all Government official websites. Our complete current affairs helps you to get more marks in Banking, insurance, UPSC, SSC, CLAT, Railway and all other competitive Exams. 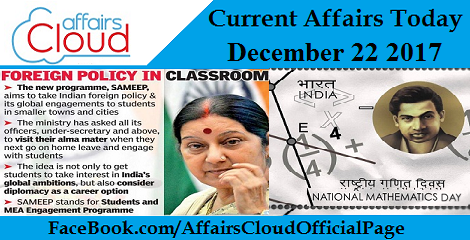 MEA launches SAMEEP to take Indian foreign policy to students across the country
Union Ministry of External Affairs (MEA) has launched Students and MEA Engagement Programme (SAMEEP), which aims to take Indian foreign policy and its global engagements to students in small towns and cities across India.
i. The objective behind this programme is not only to familiarise students about India’s foreign policy and functions of MEA but also to inspire them for considering diplomacy as a career option.
ii. MEA has also started an interactive program on social media called “ask the spokesperson”…………………………………………Click here to Read more i. This agreement was signed on December 21, 2017 and will be effective from January 1, 2018.
ii. It was signed by Central Board of Direct Taxes (CBDT) Chairman, Sushil Chandra and Swiss Ambassador to India Andreas Baum.
iii .Under this agreement, from 2018, India and Switzerland would start collecting data in line with global standards and will exchange it from 2019 onwards.
Quick Facts about Switzerland:
♦ Currency – Swiss franc
♦ Important Rivers – Rhine, Aare, Rhone 7th India International Coffee Festival (IICF):
i.The India International Coffee Festival (IICF) is organised by India Coffee Trust and Coffee Board of India. This festival will promote coffee tourism in Karnataka.
ii. Around 500 international delegates would participate in this festival. The festival will include seven skill building workshops in roasting, brewing and post-harvest technologies.
iii. It will conduct an expo, in which latest coffee-related technologies will be exhibited by more than 60 companies. Also, a startup pavilion and golf championship will be arranged as part of this festival.
About Coffee Board of India:
♦ Secretary – Srivatsa Krishna
♦ Managed by – Ministry of Commerce and Industry
♦ Aim – to promote coffee production in India Centre of Excellence in Information Technology (CEIT):
i. India’s Ambassador to Egypt, Sanjay Bhattacharyya, said that, the equipment and course material for CEIT have reached Egypt. Also, the premises are under construction.
ii. The CEIT would provide high-tech education and skills to the youngsters of Egypt. Sanjay Bhattacharya visited the Al-Azhar Observatory recently.
About Al-Azhar University:
♦ Egypt’s oldest degree-granting university
♦ President – Usama al-Abd
♦ Location – Cairo, Egypt

NPAs may rise to 10.8% in March 2018, 11.1% by Sept 2018: RBI
Results of macro stress test, carried out by Reserve Bank of India (RBI), revealed that gross non-performing assets (GNPAs), in proportion to gross advances might rise from 10.2 per cent in September 2017 to 10.8 per cent in March 2018 and may touch 11.1 per cent by September 2018.
RBI’s assessment of NPAs:
i. This information was provided in RBI’s Financial Stability Report (FSR) released on December 21, 2017.
ii. The report outlined that gross non-performing advances (GNPA) ratio and the stressed advances ratio in Indian banking sector increased during the period from March – September 2017.
iii. For the same period, capital to risk-weighted assets ratio (CRAR) of banking sector improved from 13.6 per cent to 13.9 per cent.
iv. In terms of credit growth between March – September 2017, scheduled commercial banks (SCBs) showed an improvement while public sector banks (PSBs) continued to lag in comparison to private sector banks.
v. GNPAs of the non-banking financial companies (NBFCs) as a percentage of total advances rose between March – September 2017. 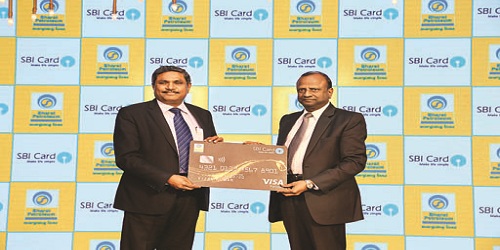 i. ’BPCL SBI Card’ will offer up to five per cent savings on fuel purchases, which is being considered as most beneficial proposition in this segment.
ii. It can be used on any of the 14000 Bharat Petroleum fuel stations across India. Annual membership fee for this card is Rs. 499.
iii. This card will also offer savings deal on other regular spends for grocery, entertainment and utility bill payments.
Quick Facts about SBI Cards:
♦ Founded in – 1998
♦ Headquarters – Gurugram
♦ Joint Venture between – State Bank of India (SBI) and GE Capital
♦ Current CEO – Vijay Jasuja

World Bank approves USD 40 mn loan for UP tourism project
On December 20, 2017, World Bank Board of Directors approved a loan worth USD 40 million for a tourism project in Uttar Pradesh (UP).
Details about World Bank loan for UP tourism project:
i. The loan will be granted by International Bank for Reconstruction and Development, IBRD (member institution of World Bank Group). The loan will have a maturity term of 19 years.
ii. This project of UP tourism will be executed in a way that optimizes state’s existing assets in a sustainable and inclusive manner which will benefit poor residents and local entrepreneurs.
iii. The project will focus on Agra and the Braj region and will enhance linkage of local businesses with the tourism value chain.
Quick Facts about World Bank:
♦ Formed in – 1945
♦ Headquarters – Washington D.C., US
♦ Current President – Jim Yong Kim
♦ Parent Organisation – World Bank Group

SEBI hikes FPI investment limit
In a bid to boost inflows of foreign funds in India, Securities and Exchange Board of India (SEBI)has raised the investment limit for foreign portfolio investors (FPI) in central government securities to over Rs 191000 crore.
i. This new limit will come into effect from January 1, 2018.
ii. Current investment limit for FPIs in central government securities  is Rs 189700 crore.
iii. Besides, for sovereign wealth funds, multilateral financial agencies, foreign insurance funds, pension funds and foreign central banks, which are categorised as long-term FPIs, the investment limit in central government bonds has been raised to Rs 65100 crore from the existing Rs 60300 crore.
iv. Investment limit in state development loans (SDL) has also been raised to Rs 31500 crore and Rs 13600 crore for FPIs and long-term FPIs respectively.
Quick Facts about SEBI:
♦ Formation Year: 1988 (as non-statutory body). It received statutory powers in 1992 through SEBI Act, 1992.
♦ Purpose: Regulation of Securities Market in India
♦ Headquarters: Mumbai
♦ Current Chairman: Ajay Tyagi 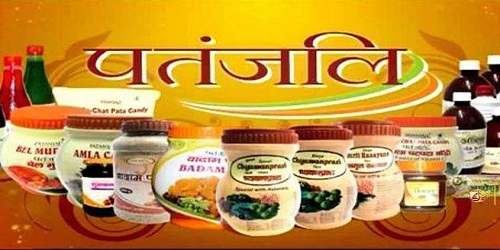 Patanjali – India’s most trusted FMCG Brand:
i. Patanjali has also been named the most attractive brand. The study was conducted on 11,000 brands in 16 cities of India.
ii .Patanjali Ayurved Limited was started in 2006. Its founders are Ramdev and Acharya Balkrishna.
About The Brand Trust Report, India Study:
♦ Author – N. Chandramouli
♦ Country – India
♦ Publisher – Trust Research Advisory Salman Khan – tops Forbes India Celebrity 100 List:
i. Salman Khan was followed by Shah Rukh Khan and Virat Kohli in the 2nd and 3rd positions respectively. Actor Priyanka Chopra is the only female celebrity to make the top 10 list.
ii. The 2017 Forbes India Celebrity 100 List takes into account entertainment-related earnings of celebrities. The period considered was October 1, 2016 to September 30, 2017.
iii. Salman Khan has topped this list for the second consecutive year. He has earned Rs. 232.83 crore in total for the period considered.
About Salman Khan:
♦ Age – 51
♦ Occupation – Actor, producer, singer, presenter Lieutenant General B S Sahrawat – Director General of NCC:
i. Lieutenant General B S Sahrawat is an alumnus of the National Defence Academy, Khadakwasla and Indian Military Academy, Dehradun.
ii. He has a Masters degree in Management Studies from Osmania University, Hyderabad and M Phil from Madras University.
iii. He has completed his PhD in ‘Human Capital Management in Army’. He also bags a Sena Medal.
About National Cadet Corps (NCC):
♦ Formed – 1948
♦ Headquarters – New Delhi
♦ Motto – Unity and Discipline

Quikr acquires HDFC’s digital, realty units in all stock deal
Housing Development Financial Corporation (HDFC) has sold its realty brokerage business ‘HDFC Realty’ and its digital real estate business ‘HDFC Red’ (owned by HDFC Developers) to online advertisements platform Quikr.
i .Combined value of both these businesses of HDFC is being estimated to be about Rs 357 crore.
ii. In return, HDFC will get 3.5% stake in Quikr.
iii .Including this acquisition, Quikr’s valuation has soared to $1.6 billion.
iv. In past couple of years, Quikr has been on an acquisition spree in the real estate business. In 2015, it bought real estate platform CommonFloor for about $120 million.
Facts about Quikr:
♦ Founded in – 2008
♦ Headquarters – Bengaluru
♦ Current CEO – Pranay Chulet 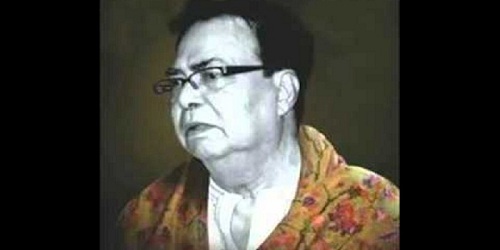