We are here for you to provide the important current affairs December 19 2017 which have unique updates of all daily events from all newspapers such as The Hindu, The Economic Times, PIB, Times of India, India Today, Indian Express, Business Standard, all Government official websites. Our complete current affairs helps you to get more marks in Banking, insurance, UPSC, SSC, CLAT, Railway and all other competitive Exams. 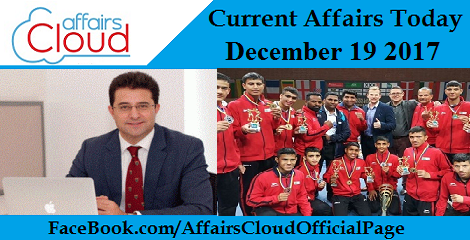 Parliament passes amendment to Companies Act 2017
On December 19, 2017, Rajya Sabha passed the Companies (Amendment) Bill, 2017 by a voice vote. This bill has already been passed by the Lok Sabha.
Salient Features of Companies (Amendment) Bill, 2017:
i. This bill seeks to introduce major amendments in the Companies Act, 2013.
iiUnion Minister of State for Corporate Affairs, P P Chaudhary has mentioned that the provisions included in this amendment bill would help ensure timely filing of returns by the companies.
iii. Besides, it will also include adequate safeguards in Companies Act to protect the interests of shareholders.
iv. The amendment bill also reinforces the provision under which, companies are directed to spend 2 per cent of their income on Corporate Social Responsibility (CSR) activities.

Assam signs MoU with Isha Foundation to rejuvenate its rivers
On December 16, 2017, Assam State Government and Isha Foundation signed a memorandum of understanding (MOU) for rejuvenation and conservation of rivers. Drug controller allows Indian firm to conduct phase 1 trials for Zika vaccine
On December 18, 2017, Union Minister of State for Health and Family Welfare, Ashwini Kumar Choubey informed Lok Sabha that Drugs Controller General of India has granted permission to an Indian firm to conduct Phase-I clinical trials for a Zika vaccine.
Information about Zika Virus and trials for Zika Vaccine:
i. Permission to conduct Phase-I clinical trials for a Zika vaccine was based on evaluation of application submitted by the Indian firm and consequential consultation with the Experts Committee.
ii. In the application, the Indian firm had presented non-clinical (animal) toxicity data, claiming 100 per cent efficacy in animals.
iii. Zika virus infection is primarily spread by the Aedes egypti mosquito. Infections in pregnant women can cause birth defects (microcephaly) in newborns.
iv. From February 1, 2016 to November 18, 2016, Zika virus infection was declared as Public Health Emergency of International Concern by World Health Organisation (WHO) following an outbreak in Brazil and other Latin American countries.
v. Currently, there are 27 laboratories in India that can test Zika virus.

Centre gives ‘green’ nod for Kaleshwaram project in Telangana
Telangana State Government’s Kaleshwaram Lift Irrigation Scheme (KLIS) has got environment clearance from Union Ministry of Environment and Forest. However, the clearance came along with certain conditions.

Conditions to be followed while executing KLIS:
i. The executing authorities will have to report micro-climatic change conditions in the project area during construction/post-construction period at regular intervals.
ii. For preparing plans for greenbelt development and reservoir rim treatment, the executing authorities will have to consult state forest department.
iii. Besides, there are other conditions related to disposal of solid waste, compensation for land acquisition and rehabilitation and resettlement.
iv. KLIS is aimed at the development of drought prone, upland and backward areas of Telangana States. The project will provide irrigation facilities on 45000 acres land in Karimnagar district.
v .The environmental clearance for this project was given after conducting public hearings in 15 districts in Telangana and one in Maharashtra.

Losar Festival celebrated in Ladakh
On 19th December 2017, Losar Festival began in Ladakh region of Jammu and Kashmir.
Losar Festival:
i. The Losar festival is celebrated to mark the New Year. Celebrations are carried out for 3 to 9 days in different parts of Ladakh.
ii. It is celebrated by making symbolic meals and offerings. House decorations are done with good luck signs.
iii. Prayer flags are hoisted in religious places as a sign of welcoming the New Year. It has become one of the major events for tourists in winter.
Some lakes in Jammu & Kashmir:
♦ Manasbal Lake, Dal Lake, Nageen Lake and Wular Lake

Punjab bans nylon, plastic kite string
On 18th December 2017, the Punjab government announced a complete ban on the manufacturing, sale, production, supply and use of kite string made of nylon, plastic or any other synthetic material.
Nylon, plastic kite string banned in Punjab:
i. The ban also includes any other kite flying thread that is sharp or made of glass, metal or any other material.
ii. Permission is given only for a cotton thread free from any sharp, metallic, glass component, adhesive and thread strengthening material to be used as kite string.
Some festivals of Punjab:
♦ Mela Chiragan – death anniversary of Punjabi Sufi poet and saint Shah Hussain
♦ Rath Yatra Nabha – associated with the god Jagannath
♦ Hola Mohalla – fair held at Anandpur Sahib on the day following Holi 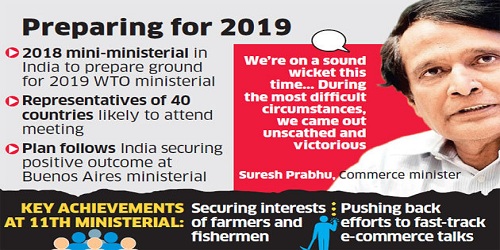 Mini-ministerial meeting of 40 WTO members in February 2018:
i .The aim of this mini-ministerial meeting is that the WTO should also focus on relevant issues of today’s world. In the meeting support for food security and other issues will be discussed.
ii .India has been bringing up agricultural issues at the WTO. It also opposes the practice of bringing issues to WTO which are not directly linked to trade.
iii .The 11th WTO meet collapsed recently in Buenos Aires. It ended without any ministerial declaration or outcome.
About World Trade Organisation:
♦ Purpose – Regulate international trade
♦ Headquarters – Geneva, Switzerland
♦ Director-General – Roberto Azevedo

Andhra Pradesh, UNESCO to set up gaming hub, special school
Andhra Pradesh Government along with the UNESCO Mahatma Gandhi Institute of Education for Peace and Sustainable Development (MGIEP) is planning to set up a gaming for e-learning hub.
Gaming for e-learning hub:
i .Anantha Kumar Duraiappah, Director of UNESCO MGIEP said that this hub will be the first of the its kind in India and Asia-Pacific region.
ii. He said that the hub will also be a centre of excellence for children with learning differences. He added that the blueprint of the hub is being developed.
iii. He said that the hub will have links with the universities and institutes like IITs and IIMs. The hub will advise universities on future courses that they have to design.
About UNESCO MGIEP:
♦ UNESCO’s specialist institute on education for peace and sustainable development to promote global citizenship
♦ Director – Dr. Anantha Duraiappah
♦ Launched – 2012

Yes Bank, EIB to co-finance $400 mn for clean power projects
YES Bank and the European Investment Bank (EIB) have released a joint statement announcing a co-finance programme of $400-million for renewable power generation in India.
Yes Bank-EIB co-financing for clean power projects:
i .Under this programme, both the entities will co-finance a range of renewable energy projects being built and operated by leading Indian companies and private sector developers.
ii. Yes bank will fund $200 million while another $200 million will be supported by EIB.
iii. Several solar projects in Rajasthan, Maharashtra and Karnataka have been identified, which shall be supported under Yes Bank – EIB co-finance programme.
iv. YES Bank MD and Chief Executive, Rana Kapoor stated that this programme is in line with Yes Bank’s commitment to finance 5000 megawatt of renewable energy. This commitment was made at the first Re-Invest Summit in 2015.
Quick Facts about Yes Bank:
♦ Founded in – 2004
♦ Headquarters – Mumbai, Maharashtra
♦ Current MD & CEO – Rana Kapoor
♦ Tagline – ‘Experience our Expertise’ 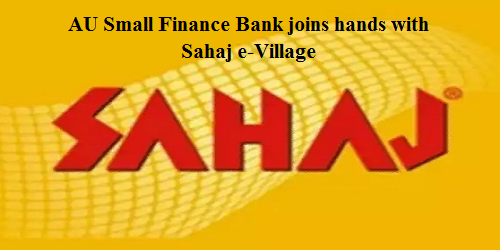 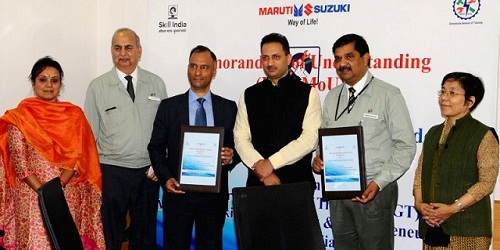 Details about Skill Development Ministry – Maruti Suzuki MoU:
i. Under this MoU, Maruti Suzuki will develop specific training modules relevant to the automobile industry, in consultation with DGT.
ii. Maruti Suzuki shall also conduct courses across India at Industrial Training Institutes (ITIs), regional training centers and premises of its vendors and dealers.
iii. The courses shall be related to Automotive Service & Repair, Automotive Paint Repair and Automotive Body Repair.
iv. On successful completion of these courses, the trainees will be eligible for employment in Maruti Suzuki or its business partners post screening and fulfilment of selection criteria.
Quick Facts about Maruti Suzuki:
♦ Founded in – 1981
♦ Headquarters – New Delhi
♦ Current Chairman – R. C. Bhargava 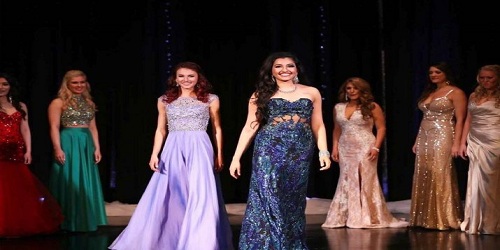 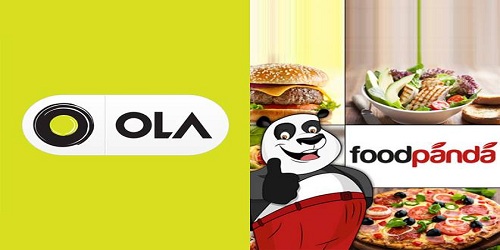 Ola acquires Foodpanda:
i. As per the deal, Foodpanda’s India business will be transferred to Ola in exchange for Ola’s stock. Details of the transaction were not revealed. Ola would invest $200 million in Foodpanda India’s operations.
ii. Saurabh Kochhar, who was the CEO of Foodpanda India left recently. Pranay Jivrajka, a founding partner at Ola has been named the interim CEO of Foodpanda India.
About Ola Cabs:
♦ Founded – 2010
♦ CEO – Bhavish Aggarwal
♦ Headquarters – Bangalore, Karnataka

ZSI for first time compiles list of 157 alien invasive animal species
For the first time, Zoological Survey of India (ZSI) has compiled a list of 157 alien invasive animal species which pose a threat to biodiversity and human well-being.
ZSI List of Invasive Animal Species:
i. Alien species become ‘invasive’ when they deliberately or accidentally venture outside their natural areas. In the new areas, such species out-compete the native species and eventually upset the ecological balance.
ii. Announcement about the compilation was made on the sidelines of the National Conference on the Status of Invasive Alien Species in India. This conference was organised by the ZSI and the Botanical Survey of India (BSI)
iii. Out of the 157 alien invasive species identified, 99 are found in marine ecosystem while 58 are found on land and in freshwater habitats.
Quick Facts about Zoological Survey of India (ZSI):
♦ Formed in – 1916
♦ Headquarters – Kolkata
♦ Parent Organisation – Union Ministry of Environment, Forest and Climate Change

Russian bobsledder Alexey Voevoda banned for life from Olympics
On 18th December 2017, International Olympic Committee (IOC) announced a life ban for Russia’s Alexey Voevoda from the Olympics for anti-doping violations in the 2014 Sochi Winter Games.
Life ban for Alexey Voevoda from Olympics:
i. Alexey Voevoda had won 2 gold medals in the two-man and four-man bobsled events at the 2014 Sochi Winter Games.
ii. These titles were cancelled recently after IOC disciplinary commission disqualified Alexey Voevoda’s teammate Alexander Zubkov, as he was found guilty of anti-doping violations.
iii. Russia has been banned from the 2018 Winter Olympics in Pyeongchang for manipulation of the anti-doping system. Only Russian athletes with a clean history of non-doping are allowed to participate.
About Court of Arbitration for Sport (CAS):
♦ Established – 1984
♦ Location – Lausanne, Switzerland
♦ Authorized by – International Olympic Committee 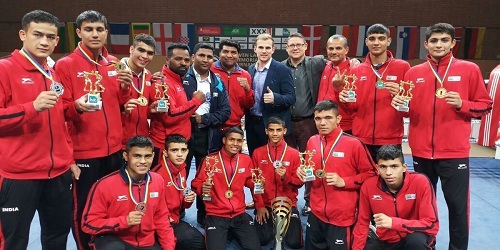