Thane Creek, located on the western bank, between the Airoli and Vashi bridges that connect Mumbai with Navi Mumbai, is declared as “Flamingo Sanctuary” as over 25,000 flamingo turned up at the stretch of 17 sq km of Thane creek by the Maharashtra Government.

Defence Research and Development Organisation(DRDO) developed a poly-herbal medicine for the treatment of leucoderma(white patches on skin),this medicine has been introduced in market by a private company.

Govt approved to set up SPV to clean Yamuna

Government to impose 10 per cent import duty on wheat

Ministry of Defence (MoD) made a path breaking decision by approving a proposal by the Defence Research and Development Organization (DRDO) for Transfer of Technology (ToT) for commercial production of its LAKSHYA pilotless target aircraft (PTA) to private sector defence manufacturer Larsen and Toubro (L&T).

Foxconn to invest $5 billion in Maharashtra

Microsoft Translator is a new app designed in which users can type or speak the word or phrase they want translated. In response, the app will show the translated text on the screen and then speaks it out loud has been launched by Technology Giant MICROSOFT. 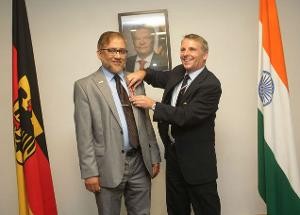 Indian Sociobiologist Raghavendra Gadagkar, a professor at the Centre for Ecological Sciences, Indian Institute of Science (IISc) was awarded Germany’s highest civilian honor “The Cross of Order of the Merit”

Amrit Lugun appointed as Ambassador of Republic of the Sudan 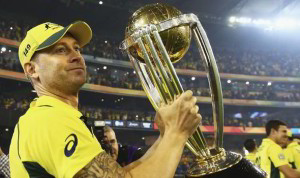 India static at 156th in FIFA

The Indian football team continued to be at 156th in the latest FIFA rankings, as world champions Germany dropped to number three, with beaten finalist Argentina still holding on to the number one spot.