We are here for you to provide the important current affairs August 3 2018 which have unique updates of all daily events from all newspapers such as The Hindu, The Economic Times, PIB, Times of India, India Today, Indian Express, Business Standard, all Government official websites. Our complete current affairs helps you to get more marks in Banking, insurance, UPSC, SSC, CLAT, Railway and all other competitive Exams. 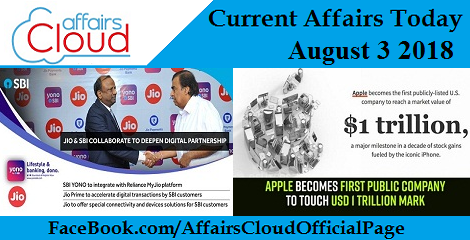 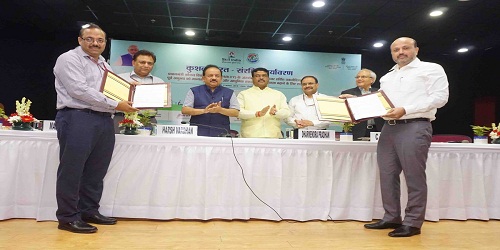 i. It was attended by representatives of UN Environment, UNDP, Deutsche Gesellschaft für Internationale Zusammenarbeit (GIZ),etc.
ii. This is under under the Skill India Mission – Pradhan Mantri Kaushal Vikas Yojana (PMKVY).
iii. There are around 200,000 refrigeration and air-conditioning (RAC) service technicians in the country mainly in the informal sector.
iv. Skill training will happen under HCFC Phase-out Management Plan (HPMP) Stage-I being implemented by the Ozone Cell, MoEFCC and Electronic Sector Skill Council of India (ESSCI).
v. Under this, in Stage-I of HPMP, nearly 11,000 technicians were trained and in Stage-II, around 17,000 technicians will be trained.
vi. The project will also include train-the-trainer programmes, updating of National Occupational Standards, and certification.
vii. This project will not only improve employment opportunities, but also in educating them about safety requirement, energy efficiency and refrigerant leak minimization.
Other announcements:
i. A mobile application developed by Electronic Sector Skill Council of India and Ozone Cell for the trainees under the project for continuous information exchange with the service technicians was launched.
ii. It will have training material and instruction videos prepared in four regional languages and Hindi .
iii. The videos have been jointly developed by the Ozone Cell and Energy Efficiency Services Ltd in collaboration with UN Environment.
Background:
i. India has high growth in the air-conditioning (AC) market. Refrigerants used in ACs are either Ozone Depleting Substances (ODS), or have extremely high global warming potential.
ii. And since India is party to the Montreal Protocol on Substances that Deplete the Ozone Layer, the country is in the process of phasing out Ozone Depleting Substances (ODS). 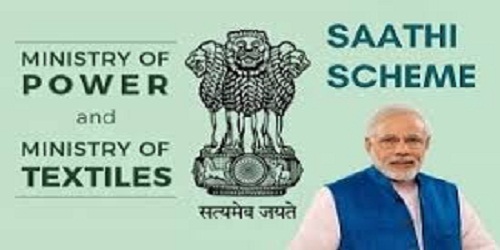 Objective:- These efficient equipments causes energy savings and cost savings to the unit owners .
Other important facts:-
i. Under the administrative control of Ministry of Power, Energy Efficiency Services Limited (EESL) will replace old inefficient electric motors with energy efficient IE3 motors which will result in energy and cost saving up to 10-15% in the first phase.
ii. Powerloom clusters at Ichalkaranji, Bhiwandi, Erode, Surat, Bhilwara and Panipat have been identified for pilot study.

‘WOW’ (Wellness of Women) app launched for creating awareness on preventive healthcare by F(ICCI)LO
On August 3, 2018, FICCI Ladies Organisation, the women’s wing of Federation of Indian Chamber of Commerce and Industry has launched a mobile application called “WOW” (Wellness of Women).
Objective:
Aimed at creating awareness on preventive healthcare.
Key Points:
i. It is powered by ‘Ask Apollo’ of the city-based Apollo Hospitals Group.
ii. This platform allows users to talk to doctors through video conferencing or connect with them via voice or email.
iii. Users can also upload clinical information such as reports, images, and scans so that experts can provide an opinion.
FICCI Ladies Organisation:
National President: Pinky Reddy. i. The meeting was co-chaired by
Indian Side: Lt Gen Satish Dua, Chief of Integrated Defence Staff to the chairman, Chiefs of Staff Committee (CISC) and
US Side: Lt Gen Bryan Fenton, Deputy Commander, Indo-Pacific Command.
ii. In the 2+2 dialogues the MEA Sushma Swaraj and Defence Minister Nirmala Sitharaman would meet their US counterparts.
iii. India and the US were also working to have a joint drill of all the three armed forces of the two countries.

India & Japan to cooperate in bamboo sector in Tripura
On August 3, 2018, a team from the Japanese Embassy in New Delhi and stakeholders in the Bamboo handicraft sector of Tripura took part in a workshop called ‘Bridging Japan and India by Bamboo’.
i. The Japanese team, led by Kenko Sone, Minister, Economic and Development, Embassy of Japan, India.
Objective:
To discuss possibilities of a India-Japan cooperation in bamboo craft sector.
Key Points:
i.The Japanese team held a workshop at the Bamboo and Cane Development Institute (BCDI), Agartala.
ii. An externally aided project, the phase -II of Tripura JICA (Japan International Cooperation Agency) has been signed and will be operational from December 2019.
iii. A Rs 1000-crore soft loan agreement is going to be signed between JICA and Tripura Government.
iv. Japan will help the Indian artisans get machines needed for greater production.
Tripura:
♦ Chief Minister: Biplab Kumar Deb.
♦ Governor: Tathagata Roy.
♦ National Parks: Clouded Leopard National Park, Rajbari National Park.

Maharashtra govt approves over Rs 7,000 crore for water projects
On August 1 2018, Maharashtra state minister informed that Maharashtra govt. has approved over Rs 7,000 crore to fulfill the drinking water projects in scarcity hit regions.
i. The government has approved Rs 7,952 crore to finish 6,624 water projects in 10,583 villages under the National Rural Drinking Water Scheme.
ii. The government has aimed to provide water supply to all regions and villages that are perennially drought-hit and also to finish the project in Konkan, Nashik, Aurangabad, Amravati, Nagpur and Pune divisions.
iii. Around 6,500 projects have already been completed in the last four years by spending Rs 5,500 crore.
Minister of Water Supply and Sanitation
Maharashtra state minister –  Babanrao Dattatreya Lonikar

Mukhyamantri Yuva Nestam: Andhra Pradesh Government launches unemployment allowance scheme.
On August 3, 2018, Andhra Pradesh CM Chandrababu Naidu launched ‘Mukhya Mantri-Yuva Nestham’ scheme to allowance to unemployed youth in the state.
i. The allowance will be of Rs 1000 per month.
ii. 12 lakh youths in the age group of 22-35 years will get the benefit.
iii. The scheme is eligible even if there are more than one beneficiary in a family.
iv. The money will be credited directly into the bank accounts through biometric authentication after 15 days of registration which will start from either third or fourth week of August.
v. Apart from the allowance, the government will also provide skill training.
Other Announcements:
The state cabinet has also decided to fill 20,000 job vacancies, 9000 teacher posts, and vacancies in other departments.
Andhra Pradesh:
♦ Chief Minister: N Chandrababu Naidu.
♦ Governor: E.S.L Narasimha.
♦ Capital: Amravati.
♦ National Parks: Sri Venkateswara National Park, Rajiv Gnadhi National Park, Papikonda National Park.

Kadaknath chicken meat from Jhabua, Madhya Pradesh gets GI tag
On August 3, 2018, the famous Kadaknath chicken meat from Jhabua district of Madhya Pradesh has now got a Geographical Indication (GI) tag.
i. The application was made in the category of “Meat Product, Poultry & Poultry Meat“, was approved on July 30.
ii. The Gramin Vikas Trust of Krishak Bharati Cooperative (KRIBHCO) had sought GI tag.
iii. Chhattisgarh-based Global Business Incubator Private Limited (GBIPL) had also sought GI tag for the chicken breed which is bred in the state’sDantewada district.
About Kadaknath Chicken:
Kadaknath or Kali Masi (flowl with black flash) is unique breed of chicken that is completely black in colour.

Vikas Bonanza 456: a new deposit scheme launched by Karnataka Vikas Grameena Bank (KVGB)
On August 3,2018, Karnataka Vikas Grameena Bank (KVGB) launched a new deposit scheme called Vikas Bonanza 456.
About the Scheme:
i. The scheme is of a tenure of 456 days with interest rate of 7.10 per cent for public and 7.60 per cent for senior citizens.
ii. It also offers annualized return of 7.35% for the general public and 7.89% for senior citizens.
iii. A minimum of Rs.10,000 and maximum of Rs.1 crore can be deposited under this scheme.
About Karnataka Vikas Grameena Bank (KVGB):
♦ Chairman: S Ravindran.
♦ Owned by Governement and sponsored by Syndicate Bank.
♦ Head Office: Dhanwad, Karnataka.
♦ The bank has a network of 636 branches with total business of ₹23,686 crore. This includes deposits of Rs.13,096 crore. According to FactSet Apple’s shares gained USD 5.89 to close at USD 207.39, leaving the company’s market value a notch above USD 1 trillion around USD 1,001,679,220,000.
Top five in the chart:-
Apple overtake giant entities Amazon, Google’s parent Alphabet, Microsoft ,Facebook and it tops in a US stock market.
Recent Achievements of Apple:-
i. Apple’s achievement became high in 1997 when Apple teetered on the edge of bankruptcy, with its stock trading for less than $1.
ii. Jobs eventually introduced such popular products as the iPod and iPhone that have driven Apple’s rise.
iii. Apple’s stock has climbed by 23 per cent so far this year.

DIPP starts programme for startups in energy sector
On August 3, 2018, the commerce and industry ministry joined hands with Invest India to offer its three-month programme ‘Integrate to Innovate’ for startups in the sector.
i. This programme would be carried out by the department of industrial policy and promotion (DIPP).
ii. The selected start-ups will receive a cash prize grant of up to Rs 5 lakh along with an opportunity to pilot their product with corporates.
iii. The corporates would offer them access to technology, technical and commercial mentorship and access to customers through networks.
iv. Innovators across various stages of energy life-cycle : generation, transmission and distribution, storage and consumption and in multiple sectors such as households, farm, industry, infrastructure, building, utility and transport are invited.
About Invest India:
Invest India is a national investment facilitation agency, funded by the DIPP. 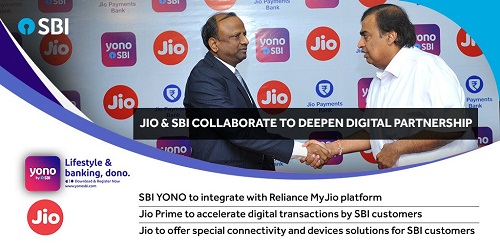 Objective:
To boost digital payment.
Key Points:
About the MoU:
i. SBI said Yono would now be preloaded on Reliance Jio handsets.
ii. SBI customers would benefit from Jio Prime with exclusive deals from Reliance Retail, Jio and partner brands.
iii. MyJio app will now offer financial services of SBI and Jio Payments Bank.
iv. SBI will also be engaging Jio as one of its preferred partners for designing and providing network and connectivity solutions.
v. Jio Phones will be available on special offers for SBI customers.
vi. Integration between SBI Rewardz (existing loyalty programme from SBI) and Jio Prime will enable customers of SBI to get offered additional loyalty reward.
vii. The service will be rolled out in the next 60-90 days.
About Jio Payments Bank:
It is a 30:70 joint venture between SBI and Reliance.

Tech Mahindra & Government of Telangana collaborate to launch India’s first blockchain district
On August 3, 2018, the Telangana State Information Technology, Electronics and Communication department (ITE&C) signed an MoU with Tech Mahindra to launch India’s first Blockchain district in Telengana at the International Blockchain Congress 2018.
i. It will be a centre of excellence and an incubator.
ii. It will have process development for the emerging technology with innovative infrastructure and facilities.
iii. This will start the growth of Indian blockchain start-ups and companies.
iv. The blockchain district will provide the platform and technology assistance to all the incubators in it.
Telengana:
♦ Chief Minister: K.Chandrashekhar Rao.
♦ Governor: E.S.L. Narasimhan.
♦ National Parks:  Kasu Brahmananda Reddy National Park, Mahaveera Harina National Park, Mrugavani National Park.

Javed Akhtar bestowed with Shalaka Samman, highest honour of Hindi Sahitya Academy
Hindi Academy Delhi has given its highest Shalaka Samman for 2017-18 to bollywood lyricist and poet Javed Akhtar.He is a father of Actor-filmmaker Farhan Akhtar. 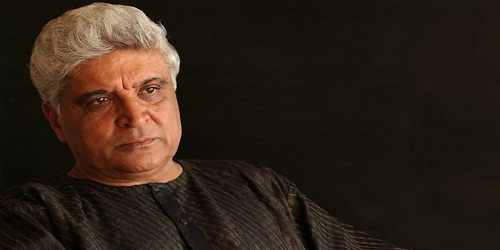 i. The scriptwriter, lyricist and poet has five National Awards for Best Lyricist to his name for works such as Border, Refugee and Lagaan.
ii. The lyricist has also been honoured with the Padma Shri in 1999 and the Padma Bhushan in 2007.
iii. He is also a recipient of the Sahitya Akademi Award in Urdu for his collection of poems entitled Lava. i. 75-year-old Mnangagwa, of the ruling ZANU-PF party, won 50.8 percent against Nelson Chamisa, of the Movement for Democratic Change (MDC) Alliance.
ii. He has bee in power since November 2017.
iii. Earlier he was the Vice-President and is called ‘the crocodile’.
iv. ZANU-PF, which has ruled the southern African country since independence in 1980.
Zimbabwe:
♦ Capital: Harare.
♦ Currency: USD, Euro, Pound Sterling. 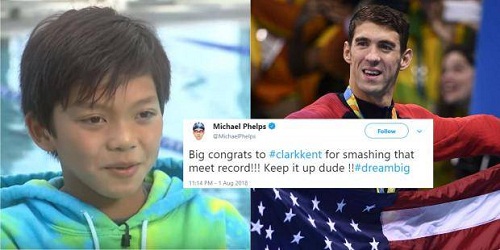 i. In the 100 meter butterfly, he broke a record set by Olympian Michael Phelps at the same meet back in 1995.
ii. He broke the records by 1.1 seconds.