We are here for you to provide the important current affairs August 13 2018 which have unique updates of all daily events from all newspapers such as The Hindu, The Economic Times, PIB, Times of India, India Today, Indian Express, Business Standard, all Government official websites. Our complete current affairs helps you to get more marks in Banking, insurance, UPSC, SSC, CLAT, Railway and all other competitive Exams. 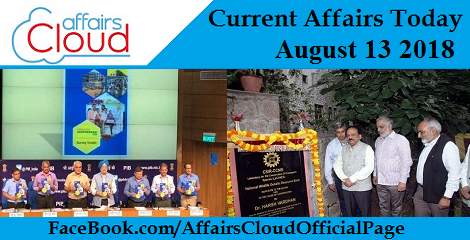 Key Points:
About the Ease of Living Index:
i. The survey was carried out in 111 cities in India.
ii. Ease of Living Index framework comprises four pillars namely-Institutional, Social, Economic and Physical.
Top 3 Cities based on the above Pillars are:

iii. Among other Metro cities, Chennai ranked 14th and Delhi ranked 65th. Kolkata did not take part in the survey.
iv. Among Union Territories,Chandigarh was the only City,which made to the top 10 list,by attaining 5th Rank in the Index.
v. The Ease of Living assessment standards are closely linked to the Sustainable Development Goals (SDGs).
The Top 10 Cities of the Index:

Centre approves proposal for setting up water aerodromes for improved air connectivity
On August 13, 2018, the Civil Aviation Ministry has approved a proposal for setting up of water aerodromes in the country.
Objective:
To enhance air connectivity through amphibian planes
Key Points:
i. In the first phase the places chosen for the development of such facilities are: Chilika Lake in Odisha, Sardar Sarovar Dam and Sabarmati River Front in Gujarat.
ii. Under the proposal, water aerodrome would be set up near locations of tourist and religious importance.
iii. Airports Authority of India(AAI) has already identified the sites in Odisha, Gujarat, Assam, Maharashtra and Andhra Pradesh where water aerodrome would be developed.
iv. A water aerodrome license would be valid for two years.
v. An aerodrome cannot be used for scheduled air transport services, among others, unless there is a licence.
vi. SpiceJet had signed a memorandum of understanding with Japan’s Setouchi Holdings to buy over 100 amphibian planes, estimated to cost $400 million.
vii. It had approached the Odisha government to allow it to operate amphibian planes from the Chilika Lake.
Other Announcements:
i. A proposal to look at seaplane operation under phase III of the regional connectivity scheme UDAN is being considered.

ii. Each participating state would submit a report within one month.
iii. The secretaries of Urban Development Departments of the states will be responsible for submitting the sub-regional plans.
iv. The matter will then be finalized within 3 months.
v. A final report of the committee might be sent on or before December 31 by e-mail.
Background:
An affidavit filed before the tribunal, the National Capital Region Planning Board (NCRPB) had submitted that there was shrinkage in NCZs like forests, water bodies and waste lands in Haryana, Rajasthan, Uttar Pradesh and Delhi. 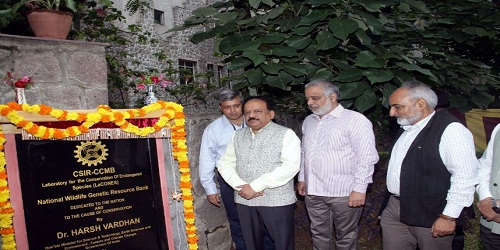 i. It will be a part of Laboratory for the Conservation of Endangered Species (LaCONES), a research wing of the Centre for Cellular and Molecular Biology (CCMB).
ii. It contains genetic resources of about 250 wildlife species.
iii. Presently it holds genetic material like DNA/RNA, cell lines, blood, semen, eggs and tissues of 23 endangered animals from India including Tiger, Lion, Thamin, Hyena, Wild Dog and Wild Ass.
iii. It can preserve the genetic resources that could be utilised to virtually resurrect an animal species in case it goes extinct.
Other Announcements:
i. The Farahabad Range of Amrabad Tiger Reserve was re-introduced.
ii. The Telangana Forest Department, Central Zoo Authority, Nehru Zoological Park and CCMB will work jointly to conduct the first ever planned reintroduction of the Indian spotted chevrotain (Moschiola indica),also known as Indian mouse deer. 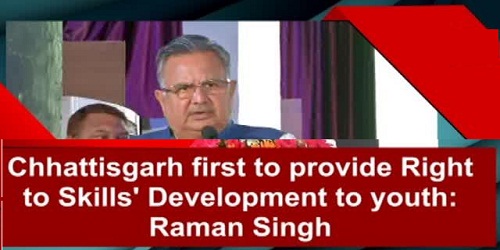 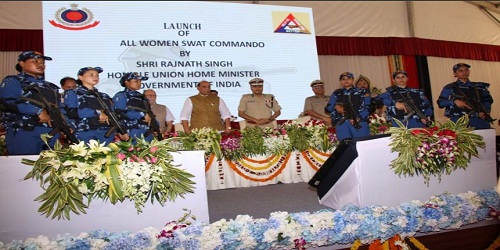 India’s first all-woman SWAT team:
i. The all-woman SWAT team was formally inducted by Home Minister Rajnath Singh.
ii. The team has undergone training for nearly 15 months. The team consists of 36 women commandos from the northeastern states.
iii. 13 of the members are from Assam. Remaining members are from Arunachal Pradesh, Sikkim and Manipur.
iv. This team is specialized in building interventions, counter ambush and VVIP security.
iv. They will be deployed at Red Fort and India Gate during Independence Day celebrations.

2 new Space Research Technology Centres to come up in Jammu and Agartala
On August 13, 2018, the Union Minister of State (Independent Charge) for Development of North Eastern Region (DoNER), MoS PMO, Personnel, Atomic Energy and Space, Dr Jitendra Singh announced that Jammu will be the first city in North India to get a full-fledged Space Technology Research Centre.
i. It would be devoted to research, academics and post-graduation study and would be under Central University Jammu.
ii. Another Space Technology Research Centre will be set up in Agartala, Tripura in the Northeast.
iii. It would work under National Institute of Technology (NIT) Agartala. 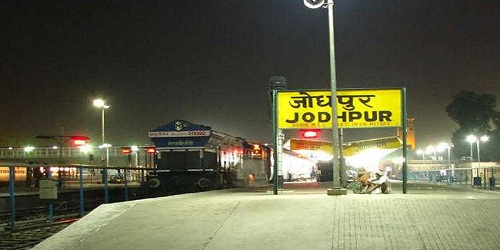 i. The survey was conducted by the Quality Council of India (QCI).The third report of Third Party Audit-cum-Survey of ranking of cleanliness covers 407 major railway stations (75 A1 category and 332 A category stations).
ii. This is a part of the assessment of cleanliness through a third party.
Highlights:
i. In the A1 category, Jodhpur has emerged as the cleanest station overtaking the spot from last year’s winner Visakhapatnam.
ii. It was followed by Rajasthan capital Jaipur is at number two and Tirupati in Andhra Pradesh was placed at number three.
iii. Marwar in Rajasthan topped the list in A category.
iv. It is followd by followed by Phulera in Rajasthan at number two, and Warangal in Telangana at number three.
v. North Western Railway topped the list as the cleanest zone followed by South Central Railway (SCR) at 2nd spot and East Coast Railway at the 3rd spot.
vi. Apart from survey for stations, survey to find the ‘cleanest train’ was also done. Over 200 trains have been pitted against each other to find the cleanest train.
A tabular representation of the ranking is given below:

Background:
♦ The first survey was conducted by the IRCTC in 2016, the second by QCI.
♦ The railways has a ‘Swachh Rail’ portal to showcase cleanliness rankings of various stations. Indian Railways is the third largest rail network in the world, covering 66,000 km and having more than 8,000 stations. 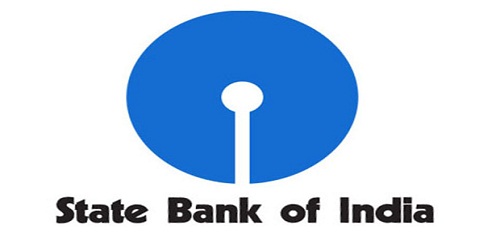 i. The survey covered 152 brands across 11 categories, is based on data collected online between August 2 and August 8 from 1,193 respondents in the country.
ii. In terms of sectors, the financial sector topped the chart followed by auto, consumer goods, food and telecom sectors.
The results as per the sectors are as follows:

Annie Zaidi wins The Hindu Playwright Award 2018
On 9th August 2018, Annie Zaidi was awarded the Hindu Playwright Award 2018 for her play Untitled-1, at the launch of the 14th edition of The Hindu Theatre Fest at the Taj Coromandel, in Chennai.
Annie Zaidi – Hindu Playwright Award 2018:
i. Annie Zaidi was presented the award by Ratna Pathak Shah, actor and director. The award was given for the best new unpublished and unperformed playscript in English.
ii. The award carried a cash prize of Rs 2 lakh. The winner was chosen by a panel of 3 judges: Ramu Ramanthan, Shernaz Patel and Parvathi Nayar.
iii. Yes Bank was the Title Sponsor for the fest. Other event partners were: Girias, Fever FM, UBER, Zebronics, Taj Coromandel and Evam.
iv. The Hindu Theatre Fest was held from 10th August to 12th August 2018 in Chennai.
About Yes Bank:
♦ MD & CEO – Rana Kapoor
♦ Headquarters – Mumbai

Justice Jhaveri appointed as the 30th Chief Justice of Odisha HC
On August 13, 2018, Justice Kalpesh Satyendra Jhaveri has been appointed as the 30th new Chief Justice of Orissa High Court (HC).
i. He will succeed Chief Justice Vineet Saran, who has been elevated to the Supreme Court.
ii. He has earlier been a Gujarat HC Judge and a Rajasthan HC judge.
iii. He obtained BSc and LLB degree from Gujarat Univeristy had started his career as lawyer at Gujarat HC in 1983.
iv. He was elected as Joint Secretary in 1984 and General Secretary of Gujarat High Court Advocates’ Association in 1988. 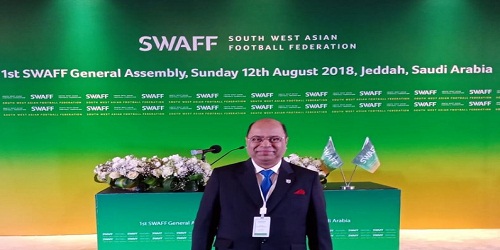 i. Apart from this, as part of the centenary celebrations of Vikram Sarabhai next year, It has planned a series of lectures at the national and international level .
ii. An international innovation award named after Sarabhai has been approved worth Rs.50 crore.
iii. ISRO would set up Sarabhai chairs at the Massachusetts Institute of Technology (MIT), Cambridge University and Gujarat University.
iv. As part of its science outreach programme, Isro is planning to launch its own TV channel.
v.Sarabahi was awarded (posthumously) the Padma Vibhushan in 1972, Padma Bhushan in 1966 and Shanti Swarup Bhatnagar medal in 1962.
vi. Isro will soon open its spaceport in Sriharikota to public to witness live space launches in the facility.
vii. ISRO also plans on launching a magazine and creating space galleries across the country.
ISRO:
Chairman: K. Sivan. i. The tournament was organized by Hochiminh City Badminton Association. Total prize money of the event was $75,000.
ii. This was the 6th Super 100 tournament of the 2018 BWF World Tour. It is also part of the Vietnam Open championships initiated in 1996.
Winners of 2018 Vietnam Open: 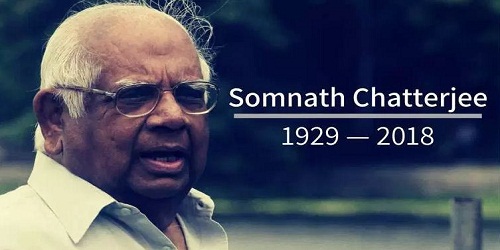 Death of Somnath Chatterjee:
i. Somnath Chatterjee was 89 years old. He was a barrister by profession.
ii. He was the first and the last communist leader to be elected as Speaker of the Lok Sabha. He held that position from 2004 to 2009.
iii. He was central committee member of CPI(M) from 1998 to 2008. He was also the leader of CPI(M) in the Parliament from 1989 to 2004.
iv.Chatterjee was given the “Outstanding Parliamentarian Award” in 1996.