We are here for you to provide the important current affairs August 11 2018 which have unique updates of all daily events from all newspapers such as The Hindu, The Economic Times, PIB, Times of India, India Today, Indian Express, Business Standard, all Government official websites. Our complete current affairs helps you to get more marks in Banking, insurance, UPSC, SSC, CLAT, Railway and all other competitive Exams. 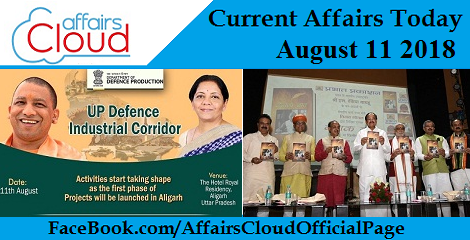 NITI Aayog, CII join hands for sustainable development
On 8th August 2018, the NITI Aayog and the Confederation of Indian Industries (CII) announced a partnership to work on meeting the Sustainable Development Goals (SDGs) of India.
NITI Aayog, CII join hands:
i. This announcement was made at the Government and Business Partnership Conclave held at New Delhi. It was organised by the NITI Aayog, CII and the United Nations.
ii. Minister of State for Power and Renewable Energy, Raj Kumar Singh, said that, a solar power plant with storage facilities and a 35,000 MW potential will be built in Ladakh.
iii. Recently, the CII launched its report: Indian Solutions for the World to Achieve SDGs. The report covers individual SDG, targets and business implications.
About NITI Aayog:
♦ CEO – Amitabh Kant
♦ Headquarters – New Delhi Reasons behind Gurgaon’s Performance:
i. Peak level of Particulate Matter (PM)2.5 rose to 189 microgm/m3. The permissible limit is 60microgm/m3.
ii. The rise of the PM is due to the location of the city which gets a huge influx of Arabian dust storms and due to its humidity which traps the dusts.
iii. Authorities have decided to ban construction works if the weather stays the same for 48hrs.
About AQI:
The range and category on which the cities have been marked are as follows:


Pradhan Mantri Gram Sadak Yojana extended beyond 12th 5 year plan
On August 11, 2018, the Cabinet Committee on Economic Affairs, chaired by the Prime Minister Narendra Modi , approved the continuation of Pradhan Mantri Gram Sadak Yojana (PMGSY) beyond the 12th five year plan period.
i. It has an estimated cost of Rs. 84,934 crore.
ii. The Centre‘s share in this will be Rs 54,900 crore and the states‘ share is Rs 30,034 crore.
iii. Initially the targets of PMGSY were to be achieved by March 2022, however date of achievement of PMGSY-I was pre-poned to March, 2019.
iv. The changed funding pattern is in the ratio of 60:40 between the Centre and State for all States except for 8 North Eastern and 3 Himalayan States (Jammu & Kashmir, Himachal Pradesh & Uttarakhand) for which it is 90:10.
Achievements:
i. Against the sanctioned length of 6,58,143 km, 5,50,601 km road length has been completed.
ii. Under PMGSY-II, out of 50,000 km works of upgradation almost 32,100 km road length have been sanctioned in 13 States. And out of sanctions issued, 12,000 km road length has been completed up to March, 2018.
About Pradhan Mantri Gram Sadak Yojana (PMGSY):
Pradhan Mantri Gram Sadak Yojana (PMGSY) was launched on December 25, 2000 ,with the objective to provide All-Weather road connectivity of1,78,184 eligible unconnected habitations.

ii. The portal is to reach out to students, researchers, scholars, scientists both from India and abroad.
iii. The portal follows a launch of India Science ( indiascience.in ), an Internet-based science channel, to showcase the developments in science and technology in India.
iv. Both the portal and the channel are part of a push by the Science Ministry to improve its public outreach. 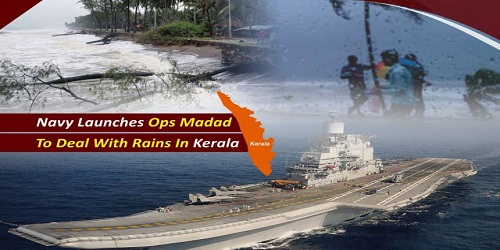 i. Several parts of Kerala have been flooded due to continuous rainfall and release of excess water from Idukki and other dams.
ii. Naval helicopters are used for ferrying divers, power tools, axes and relief material to the flooded areas to speed up the relief operations 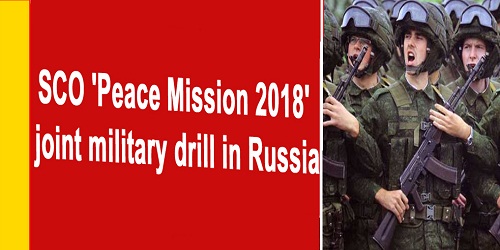 SCO Peace Mission Exercise 2018:
i. SCO Peace Mission Exercise is conducted as part of Shanghai Cooperation Organization (SCO) initiatives. It is conducted biennially for SCO member states.
ii. India is participating for the first time in the exercise after becoming a full member of the SCO in June 2017.
iii. The exercise consists of tactical level operations in an international counter insurgency or counter terrorism environment under SCO Charter.
iv. Indian contingent of 200 personnel for this exercise, mainly consist of troops from infantry and affiliated arms and services along with Indian Air Force.
v. Indian contingent will reach the exercise location on 14th August 2018. In the initial days, operational orientation will be focused with exercise setting and terrain.
vi. The staff phase of the exercise will be conducted from 22 August to 28 August 2018. In this phase, Indian contingent will establish a Joint Staff Headquarters and perform staff exercise before developing of a joint operational plan.
vii. The opening ceremony for the exercise will be on 22nd August 2018. The field training phase will be on 29 August. The closing ceremony will be on 29th August 2018.
About Shanghai Cooperation Organization (SCO):
♦ Secretary General‎ – ‎Rashid Alimov
♦ Headquarters‎ – ‎Beijing, China

RBI to pay Rs 50,000 cr dividend to govt for FY18 in line with Budget estimate for the July 2017-June 2018 financial year
On August 11, 2018, RBI announced that  the Central Board of Directors of the Reserve Bank of India, at its meeting held on August 8, 2018, approved the transfer of surplus amounting to Rs. 500 billion or Rs.50,000 crore for the year ended June 30, 2018 to the Government of India.
i. As per the Budget Estimate, the government projected to collect Rs 54,817.25 crore as dividend or Surplus of Reserve Bank of India, Nationalised Banks and Financial Institutions.
ii. Also the RBI had paid interim dividend of Rs 10,000 crore to the government to support fiscal position in March.
iii. Earlier, the RBI made a dividend payout of Rs 30,659 crore for the fiscal ended June 2017 which is less than half of the amount paid in June 2016 (Rs 65,876 crore).
iv. Surplus payout in June 2017 year was low due to printing of new currency notes following demonetisation effected on November 9, 2016.
Background:
♦ Under the RBI Act, 1934, the central bank is required to pay the government its surplus after making provisions for bad and doubtful debts, depreciation in assets and, contribution to staff and superannuation fund among others.
♦ The Reserve Bank follows July-June financial year.

Amazon inked MoU with UP govt to boost MSME entrepreneurs under ODOP scheme
On August 11, 2018, as part of the One District One Product (ODOP) scheme, Amazon partnered with UP government to provide support MSME entrepreneurs across nine districts.
i. This will be a part of Amazon India’s Kala Haat programme which aims to help traditional industries to enter in to ecommerce business.
ii. Under the programme, 300 MSME sellers registered under UP government’s ODOP scheme would be benefitted.
iii. Amazon would provide training, account management guidance, marketing tools and world-class infrastructure of storage and delivery network to these sellers.
iv. Some products and districts associated with them are:

About the Kala Haat Prograam of Amazon India:
It has been introducing lakhs of weavers, artisans and crafts people across various clusters in India to digital commerce i. Tamil Nadu Governor Banwarilal Prohit will administer the oath of office.
ii. She replaced Justice Indira Banerjee who has been appointed as Supreme Court judge.
iii. She obtained her law degree and became an advocate with the Bar Council of Maharashtra and Goa in July 1982.
iv. She was appointed on the panel of defence lawyers in the Sessions Court.
v. She taught the “Law of Crimes” subject as a part-time professor in K C Law College from 1987 to 1993.
vi. She was appointed as Assistant Government Pleader and Additional Public Prosecutor in February 1990.
vii. She was appointed as Government Pleader and Public Prosecutor on the Appellate side of the High Court of Bombay from November 1997.
viii. She became a judge of the High Court on June 26, 2001 and made Acting Chief Justice of Bombay High Court in 2015. i. Her oath was administered by Governor NN Vohra in Srinagar.
ii. She succeeded Ramalingam Sudhakar. Rekha Sharma – chairperson of NCW:
i. Rekha Sharma was previously a member of NCW. She was holding the additional charge of chairperson after Lalitha Kumaramangalam stepped down from the position in September 2017.
ii. Rekha Sharma is 54 years old. She hails from Haryana. Earlier, she was a member of District Consumer & Redressal Forum with the Haryana Government.
iii. She runs an event management center named ‘Chavi’. She has set up a registered NGO named ‘Haryana Mahila Uthan Samiti’ that works for the empowerment of rural women in Haryana.
About National Commission for Women (NCW):
♦ Founded – 1992
♦ Location – New Delhi

R S Sharma re-appointed TRAI chairperson till 2020
On 9th August 2018, Ram Sewak Sharma was given two-year extension as chairperson of Telecom Regulatory Authority of India (TRAI).
R S Sharma – chairperson of TRAI:
i. The Appointments Committee of the Cabinet has approved the reappointment of Ram Sewak Sharma as chairperson of TRAI for a further period of 2 years till 30th September 2020, that is the date on which he attains 65 years of age.
ii. In July 2015, he was appointed the Chairman of TRAI for a period of 3 years.
iii. He is a retired IAS officer of 1982 batch of Jharkhand cadre. Earlier, he had worked in several government departments involving IT-enabled programmes.
iv. He was also Director General and Mission Director of the Unique Identification Authority of India (UIDAI) or Aadhaar.
About Telecom Regulatory Authority of India (TRAI):
♦ Established – 1997
♦ Headquarters – New Delhi

Paresh Sukthankar resigned from HDFC Bank’s deputy managing director position
On August 11, 2018, Paresh Sukthankar, deputy managing director of HDFC Bank resigned from his post.
i. He will be serving the 90-day notice period, effective from August 10.
ii. The 55-year-old deputy managing director has worked at HDFC Bank since its inception in 1994.
iii.He was appointed to the post of deputy managing director in March 2017.
iv. Currently, he is overseeing the banks’ credit and risk management departments and finance and human resources.
v. Prior to joining HDFC Bank, he was at Citibank for nine years.
vi. He is a management graduate from Harvard Business School, and has served a member of various RBI Committees and committees of the Indian Banks’ Association.
vii. He was recently appointed to an RBI Committee for a medium-term action plan for improving financial inclusion.
viii. He also was a member of the High Level Steering Committee for Review of Supervisory Processes for Commercial Banks.
HDFC Bank:
♦ CEO: Aditya Puri.
♦ Headquarters:  Mumbai. 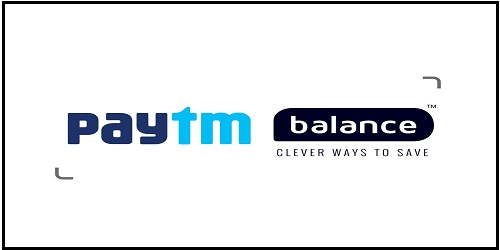 i. The transaction is expected to be about $2 million.
ii. This would enhance its user and merchant interfaces with  customised and intuitive user experiences.
iii. A six-member team of Balance Technology has joined the product and design team.
Paytm:
♦ Headquarters: Noida.
♦ CEO: Renu Satti.
♦ Founded: 2010.

i. Venkaiah Naidu said that, continuous communication between public representatives and the public is important for the development of our country.