We are here for you to provide the important current affairs April 2 2018 which have unique updates of all daily events from all newspapers such as The Hindu, The Economic Times, PIB, Times of India, India Today, Indian Express, Business Standard, all Government official websites. Our complete current affairs helps you to get more marks in Banking, insurance, UPSC, SSC, CLAT, Railway and all other competitive Exams. 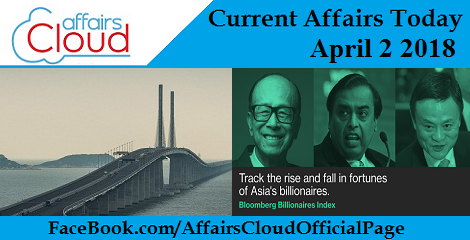 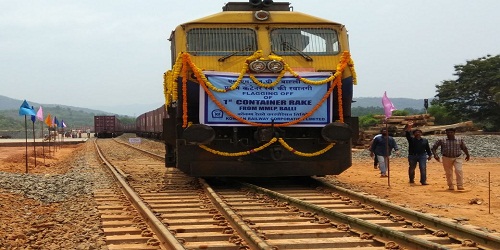 Multi Modal Logistic Park inaugurated at Goa:
i. The Multi Modal Logistic Park was inaugurated by CMD Konkan Railway Sanjay Gupta and P K Agarwal, Director, Container Corporation.
ii. This park has been constructed at a cost of Rs 43 crore. It has been constructed as per the MoU between Konkan Railway & Container Corporation of India Ltd.(CONCOR).
iii. It has been set up on an area of 81,300 square meters. It has the capacity to handle both Domestic and Exim Container Traffic.
iv. It can also handle commodities transported by both open and covered wagons. Custom Bonded Warehousing space is also being set up on an area of 5000 square meters.
v. It will also provide value added services like stuffing, repackaging etc. After Container Depot set up is completed at Balli, containers from Goa can reach JNPT (Jawaharlal Nehru Port Trust) within 16 to 18 hours against the 30-40 hours through road currently.
vii. This facility is expected to bring additional income to Konkan Railway. Through the economic transport solutions and advanced facilities that CONCOR and Konkan Railway offer at this facility, the trade and industry in Goa will be highly benefited.
About Container Corporation of India Ltd.(CONCOR):
♦ Chairman & Managing Director – V. Kalyana Rama
♦ Registered Office – New Delhi 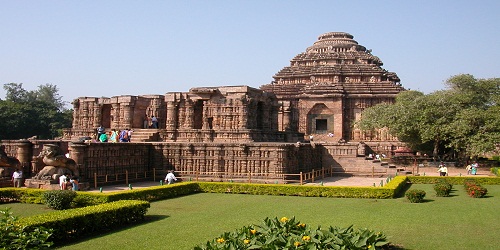 Salient Features of West Bengal State Government’s “Rupashree” scheme:
i. This scheme was announced by West Bengal Finance Minister Amit Mitra while presenting the state budget for 2018-19.
ii. To avail financial assistance under this scheme, a woman has to fill the application form before her marriage and submit it to the Block Development Officer (BDO) or Municipality Office.
iii. Post submission of the form, amount of Rs 25000 will be credited to her bank account before her marriage.
iv. Only those women, whose annual family income is up to Rs 1.5 lakh are eligible for this scheme.
v. Besides, women must be a permanent resident of West Bengal and must have attained 18 years age at the time of their marriages. There is no minimum educational qualification to apply for this scheme.
vi. Budgetary allocation for this scheme is Rs 1500 crore and is expected to benefit around six lakh women every year.
Quick Facts about West Bengal:
♦ Capital – Kolkata
♦ Current Governor – Keshari Nath Tripathi
♦ Current Chief Minister – Mamata Banerjee
♦ Important National Park – Sundarbans National Park

India ranks 37th in global startup ecosystem in 2017: Report
According to a report released by StartupBlink, the Indian startup ecosystem, during 2017, ranked at number 37 out of 125 countries.
i. India’s 37th rank outlines that there is still much to be done in terms of ease of doing business, startup policies and easing tax compliance.
ii. United States (US) has topped the global ranking index of countries, followed by United Kingdom (UK) and Canada……………………………..Click here to Read More Information about Nepal’s first accessible trekking trail:
i. The trail was inaugurated as a part of International Conference on Accessible Tourism (held for the first time in Nepal) from 29th to 31st March, 2018 in Pokhara, Nepal.
ii. This accessible trekking trail is a 1.3-km patch on the 14-km long hiking path in the ridge connecting Sarangkot to Naudanda areas.
iii. This patch has proper signage and washrooms and offers a magnificent view of Mt. Annapurna, Fisthtail and Manaslu.
Quick Facts about Nepal:
♦ Capital – Kathmandu
♦ Currency – Nepalese Rupee
♦ Current Prime Minister – Khadga Prasad Oli
♦ Neighbouring Countries – India and China 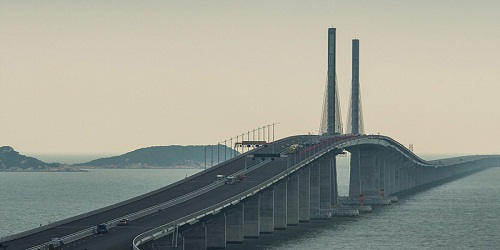 More Details about World’s longest sea bridge in China:
i. This cross-sea bridge will be 55km-long and six lanes wide, comprising of four tunnels and four artificial islands.
ii. It is a multi-billion dollar project, which took seven years to complete.
iii. It is reported that quantity of steel used in building this bridge is more than 60 Eiffel Towers in Paris, France and experts from 14 countries have been involved in its construction.
iv. The brigde will reduce the commute time between mainland China, Macau and Hong Kong to half. It is estimated that nearly 40000 vehicles will be passing over this bridge on daily basis, including shuttle buses running at 10-minute intervals.
Quick Facts about China:
♦ Capital – Beijing
♦ Currency – Renminbi
♦ Current President – Xi Jinping
♦ Important Rivers – Yangtze, Yellow River

PFMS portal processes Rs 71, 633.45 crore transactions on a single day
On 28th March 2018, a record amount of Rs 71, 633.45 crore was digitally transacted through the Public Financial Management System (PFMS) portal.
PFMS portal processes Rs 71, 633.45 crore transactions on a single day:
i. The total number of transactions through the PFMS portal was 98,19,026 on 28th March 2018. This has created a record in number of digital transactions processed in a single day.
ii. PFMS is implemented by the Controller General of Accounts, Ministry of Finance. It acts as a platform for management of funds through tracking of funds and real time reporting of expenditure and receipts through treasury and bank interface.
iii. It is used by line ministries and departments to monitor the utilisation of funds offered to various implementing agencies and state governments.
iv. It is also used for Direct Benefit Transfer (DBT) payments under MGNREGA (Mahatma Gandhi National Rural Employment Guarantee Act) and other notified schemes of the government.
About Union Ministry of Finance:
♦ Cabinet Minister – Arun Jaitley
♦ Ministers of State – Shiv Pratap Shukla, Pon Radhakrishnan ESPN Multi-Sport Awards – Winners:
i. ESPN Multi-Sport Awards recognised achievements across 11 categories. The winners were selected by an independent 14-member jury comprising eminent sports personalities – Somdev Devvarman, Abhinav Bindra and Bhaichung Bhutia.
ii. Kidambu Srikanth has been adjudged ‘Sportsperson of the Year – Male’ for winning four Super Series titles. He is the only Indian shuttler and the fourth player ever to accomplish this feat in one calendar year.
iii. PV Sindhu has been adjudged ‘Sportsperson of the Year – Female’ for her outstanding performance in past one year, wherein she won the Indian and Korean Open Super Series titles.
iv. PV Sindhu and Kidambi Srikanth’s coach Pullela Gopichand has been adjudged ‘best coach’.
v. Among other winners, Indian National Women’s Hockey Team got the ‘Team of the Year’ title for their first Asia Cup victory in 13 years.
vi. ’Moment of the Year’ award, which was decided through a public poll went to Jeakson Singh for scoring a memorable goal against Columbia in the U-17 FIFA World Cup. Jeakson is the only Indian to score in a FIFA event.

Former CBSE chairman Vineet Joshi is National Testing Agency D-G
On March 30, 2018, Central Government appointed former chairman of the Central Board of Secondary Education (CBSE), Vineet Joshi as the Director General (D-G) of the National Testing Agency (NTA), which will conduct various entrance examinations across India.
Vineet Joshi’s appointment as D-G of NTA:
i. Currently, Central Board of Secondary Education (CBSE) conducts Joint Engineering Entrance (JEE) Exam, National Eligibility cum Entrance Test (NEET), Central Teacher Eligibility Test (twice a year) UGC’s National Eligibility Test (twice a year) and the entrance test for Jawahar Navodaya Vidyalayas. These exams/tests are in addition to CBSE’s own board exams.
ii. With the creation of National Testing Agency (NTA), CBSE and All India Council for Technical Education (AICTE) will be relieved from conducting the above stated exams/tests.
iii. Setting up of NTA was announced by Finance Ministry Arun Jaitley while presenting Union Budget 2017-18. Subsequently, on November 10, 2017, Union Cabinet chaired by Prime Minister Narendra Modi, cleared a proposal for creation of NTA.
iv. Structrue of NTA: An eminent educationist appointed by Union Human Resources Development Ministry will be the Chairperson of NTA. The CEO of NTA will be the Director General, and will be appointed by the government. Director General will be assisted by nine verticals headed by academicians and experts. NTA will also have a Board of Governors comprising members from user institutions.
v. Vineet Joshi is a 1992-batch Indian Administrative Service (IAS) officer of the Manipur cadre, and has been appointed to the post of D-G, NTA for five years. 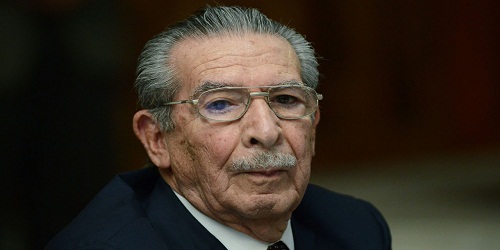 Death of Efrain Rios Montt:
i. Efrain Rios Montt was 91 years old. He was born on 16 June 1926 in Huehuetenango, Guatemala.
ii. Efrain Rios Montt became a military general in 1972. In 1982, he seized power in Guatemala through a military attack and brought down President Angel Guevara from power.
iii. In 1983, he was taken out of power in another military attack which was led by his own defence minister.
iv. He is accused for being responsible for the murder of 1,771 people during his short rule. He was considered a person of high political influence even after his short term rule ended.
About Guatemala:
♦ President – Jimmy Morales
♦ Currency – Quetzal
♦ Capital – Guatemala City 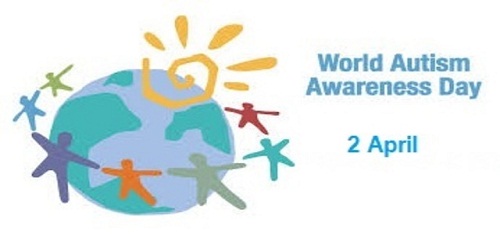 SIDBI Foundation Day
On 2nd April 2018, SIDBI celebrated its foundation day as day of Sampark (connect), Sanwad (interaction), Suraksha (security) and Sampreshan (disseminate).
SIDBI (Small Industries Development Bank of India) Foundation Day:
i. On the SIDBI Foundation Day, Chairman & Managing Director of SIDBI Mohammad Mustafa launched various initiatives from SIBDI headquarters at Lucknow.
ii. He launched the ‘MSME contact programme’. A MoU was signed with The New India Assurance Co. Ltd. on the occasion.
iii. He launched a revamped SIDBI website (www.sidbi.in). It was said that, a “Contactless Loan Platform” will be introduced on the website soon.
iv. He also launched Samridhhi, a virtual assistant on its universal loan portal www.udyamimitra.in. Samridhhi will reply to standard queries of users 24*7.
v. A ‘Bankability Kit’ was also launched. It has been introduced in partnership with Bank of Baroda and IDBI Bank.
About SIDBI (Small Industries Development Bank of India):
♦ Set up – 2nd April 1990
♦ Chairman & Managing Director – Mohammad Mustafa
♦ Headquarters – Lucknow, Uttar Pradesh