We are here for you to provide the important Current Affairs September 23 2018, which have unique updates of all daily events from all newspapers such as The Hindu, The Economic Times, PIB, Times of India, India Today, Indian Express, Business Standard, all Government official websites. 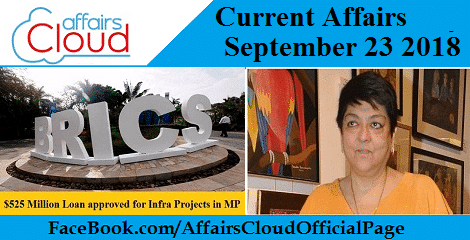 i. Centenary celebrations were observed to commemorate 100 years of liberation of Haifa in Israel by the Indian troops in 1918.
ii. Indian Army commemorates September 23 as Haifa Day every year. It pays tribute to the two Indian Cavalry Regiments, Mysore and Jodhpur Lancers that helped to liberate Haifa.

$525 Million Loan approved for Infra Projects in Madhya Pradesh by NDB
On September 20, 2018, the New Development Bank (NDB) of the BRICS announced a $525-million loan to Madhya Pradesh for infrastructure projects. i. The breakup of the loan amount is as follows:
$350-million loan for the Major District Roads Project II of Madhya Pradesh and
$175 million for building and upgrading 350 bridges.
ii. 2000 km roads of major districts would be rehabilitated through this loan amount and will help in better connectivity.
Other News:
A non-sovereign loan of $300 million was approved by NDB to SIBUR Holding of Russia for environmentally-sustainable infrastructure development related to the Zap SibNefteKhim project.
NDB:
♦ Headquarters:  Shanghai, China.
♦ Founded: 15th July 2014.
♦ President: K.V. Kamath.
♦ Brazil, Russia, India, China and South Africa.

Tax Dept. slapped YES Bank with Rs 38 crore in GST fines for violating domestic remittances norms
On September 21, 2018, Yes Bank paid Rs 38 crore in fines to the GST department for alleged violations in domestic remittances.
i. Out of this, over Rs 32 crore has been paid to the GST department, while Rs 6 crore has been paid in service tax which has been replaced by GST from July 2017.
ii. RBI has asked incumbent CEO Rana Kapoor to step aside by end of January 2019.
iii. It is due to the underpayment of tax by the bank and is related to remittances by migrants from urban pockets to their homes in rural areas.
YES Bank:
♦ MD&CEO: Rana Kapoor.
♦ Headquarters: Mumbai.
♦ Tagline: Experience our Expertise. i. She is also a former Member of Parliament. Her appointment would strengthen the cultural ties between India and Nepal and help promote Nepal’s tourism in India.
ii. Nepal government has also decided to observe 2020 as the ‘Visit Nepal Year’. 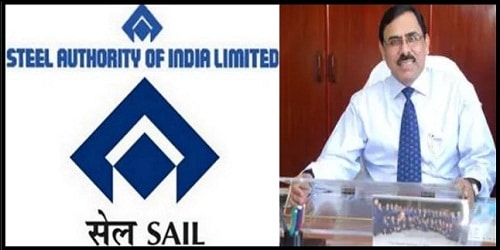 i. Presently, he is serving as the Director (Finance) in SAIL.
ii. Earlier P K Singh was the chairman of SAIL.
Other appointments by ACC:
i. P K Rath has been appointed as CMD of the Rashtriya Ispat Nigam Limited (RINL)
ii. He is presently the Director (operations) in RINL.
iii. Aslo,V Gopi Suresh Kumar was appointed as Director (Projects) in RITES Limted, a railway consultancy firm.
iv. Currently, Kumar is serving as the executive director in the EPIL.
SAIL:
Headquarters: New Delhi.
RINL:
Headquarters: Visakhapatnam.

India to host AIBA Women’s World Boxing Championships in New Delhi
AIBA Women’s World Boxing Championships will be hosted by India from 13-25 November 2018 in New Delhi.
Key Points:
i. All participating countries will arrive in New Delhi before 13 November 2018. The competition will start on 15th November 2018.
ii. This championship was last held in India in 2006 and India made its best ever performance that year. India had topped the medal tally with 4 gold, 3 silver and 1 bronze medal.
iii. The first edition of AIBA women’s world championship was held in Scranton, Unites States in 2001.
About AIBA (International Boxing Association):
♦ Interim President – Mr Gafur Rahimov
♦ Headquarters – Lausanne, Switzerland

Vaishali Narendra Salavkar will be India’s first female blind chess player at World Chess Olympiad
Blind chess player Vaishali Narendra Salavkar will become the first Indian female to be part of the International Braille Chess Association (IBCA) team at the world chess Olympiad that will be held in Batumi, Georgia, from September 23, 2018.
Key Points:
i. IBCA which is affiliated to FIDE (World Chess Federation) sends its teams to participate at the chess Olympiad.
ii. Vaishali is 45 yaers old. She hails from Maharashtra. She is an eight-time national champion. She has an Elo rating of 1,357 points.
iii. A total of 7 Indian women chess players are participating in the world chess Olympiad.
iv.  Malika Handa, is participating as part of the International Chess Committee of Deaf (ICCD) team.
v. Normal women’s team players participating in the Olympiad are: Koneru Humpy, Harika Dronavalli, Tania Sachdev, Karavade Esha and Padmini Rout.
About International Braille Chess Association (IBCA):
♦ President – Jadhav Charudatta
♦ Type – apex body of chess for the blind and visually impaired

Belgium joins France in number 1 spot in FIFA rankings with top spot shared for first time (football)
Belgium has joined France in number one position on the FIFA (International Federation of Association Football) rankings released on 20th September 2018.
Key Points:
i. This is the first time in the 25-year history of FIFA rankings, the first spot is shared.
ii. Belgium earned two wins, including their first win in the UEFA (Union of European Football Associations) Nations League over Iceland in early September to equal France with 1729 points, and has achieved the top position.
iii.  Top 10 rankings as per FIFA: 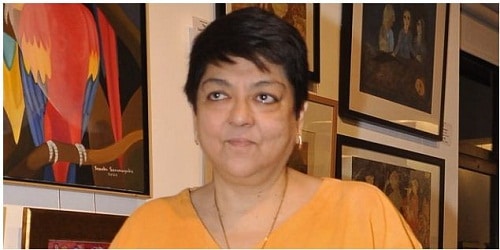 Death of Kalpana Lajmi:
i. Kalpana Lajmi was 64 years old. She was a director, producer and screenwriter.
ii. She was known for working on real subjects and making women-centric films. Some of her popular films are: Rudaali, Daman, Darmiyaan, etc.
iii. She had also written a book titled “Bhupen Hazarika – As I Knew Him.”