We are here for you to provide the important Current Affairs October 23 2018, which have unique updates of all daily events from all newspapers such as The Hindu, The Economic Times, PIB, Times of India, PTI, Indian Express, Business Standard and all Government official websites. India’s coastal communities to get USD 43.4 million from Green Climate Fund
On October 22 2018 UN-backed fund has approved USD 43.4 million for supporting climate resilience of millions of people living in the coastal states of Andhra Pradesh, Maharashtra and Odisha of India to combat extreme impacts of climate change during the 21st meeting of the Green Climate Fund (GCF) Board at Manama,Bahrain. 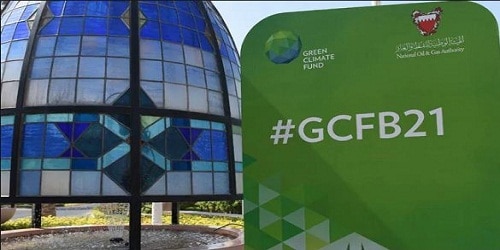 i. The new project will be supported through the United Nations Development Programme (UNDP), and is an essential step for India in reaching its goals outlined in the Paris Agreement and 2030 Agenda for Sustainable Development.
ii. Government of India will finance an additional US$86.8 million toward the new project to mainstream and accelerate the impacts of the Green Climate Fund grant.
Reason behind the fund for India
India’s coastal areas are quite vulnerable to climate change and this project focuses on selected vulnerable areas of Andhra Pradesh, Maharashtra and Odisha states. The new project, with GCF assistance, will not only help enhance resilience and adaptability, but also lead to emissions reduction while providing support to local communities for their livelihoods.
About Green Climate Fund
This fund approval is a part of more than USD 1 billion approved by the Green Climate Fund for 19 new projects to help developing countries tackle climate change. The 19 new projects amount to a total investment from GCF of USD 1,038 million, and including co-financing the projects will channel over USD 4,244 million of climate finance for low-emission, climate-resilient development.

Insolvency Law Committee submits its 2nd Report on Cross Border Insolvency and Recommends adoption of the UNCITRAL Model Law of Cross Border Insolvency, 1997
On October 22 2018 Ministry of Corporate Affairs constituted Insolvency Law Committee (ILC) to recommend modification to Insolvency and Bankruptcy Code of India, 2016, and has submitted its 2nd Report to the Government, which deals with cross border insolvency.
i. Corporate Affairs Secretary, Shri Injeti Srinivas handover this report to Shri Arun Jaitley , Minister of Finance and Corporate Affairs.
ii. UNCITRAL Model Law of Cross Border Insolvency, 1997 was recommended by ICL to adopt as it provides a complete agenda to deal with cross border insolvency issues.
UNCITRAL Model Law
The UNCITRAL Model Law has been adopted in as many as 44 countries and became a part of international best practices in dealing with cross border insolvency issues.
i. The advantages of the model law are giving priority to domestic proceedings and protection of public interest.
ii. The other advantages include greater confidence generation among foreign investors, adequate flexibility for seamless integration with the domestic Insolvency Law and a robust mechanism for international cooperation.
Four major principles of cross-border insolvency
The model law deals with four major principles of cross-border insolvency, namely
i. Direct access to foreign insolvency professionals and foreign creditors to participate in or commence domestic insolvency proceedings against a defaulting debtor;
ii. Recognition of foreign proceedings & provision of remedies;
iii.Cooperation between domestic and foreign courts & domestic and foreign insolvency practioners;and
iv. Coordination between two or more concurrent insolvency proceedings in different countries. Key Points:
i. It is organised by IAEA. It is hosted by the Department of Atomic Energy and Gandhinagar-based Institute of Plasma Research.
ii. It aims to provide a platform for discussion of major physics and technology issues and innovative concepts related to the use of nuclear fusion as a source of energy.
iii. International Thermonuclear Experimental Reactor (ITER) Organisation, European Atomic Energy Community (Euratom), research institutes involved in developing smaller plasma devices, etc. are participating in the conference.
iv. Experts from various parts of the world will discuss new challenges faced by the fusion community with respect to number of next-step fusion devices being implemented currently.
About International Atomic Energy Agency (IAEA):
♦ Chairperson – Leena Al-Hadid
♦ Headquarters – Vienna, Austria

Gwalior host 4-day international dance festival “Udbhav Utsav”
On 21st October 2018, Uzbekistan Ambassador to India Farhod Arziev inaugurated a 4-day international dance festival titled“Udbhav Utsav” in Gwalior, Madhya Pradesh.
i. This dance festival is sponsored by the Greenwood group of schools. This is the 15th year for this festival.
ii. The inaugural session was held in Jiwaji Club, Gwalior. Dance troupes from Bulgaria, Turkey and Sri Lanka, and 25 teams from India, will participate. Keshav Pandey is the organising committee president. Druzhba-III:
i. The exercise will be held at the training range in Nowshera district of Khyber-Pakhtunkhwa, in Pakistan. More than 70 soldiers from Russia’s southern military district will participate.
ii. This will be the 3rd joint military drill between Pakistan and Russia under the bilateral training cooperation agreement. This exercise is held since 2016.
iii.Armed forces from both the countries will perform tasks at an altitude of 1,400 meters above sea level.
iv. In August 2018, an agreement was signed allowing Pakistani troops to train in Russia. It was signed during the 1st Russia-Pakistan Joint Military Consultative Committee (JMCC) meeting on security and defence.
About Pakistan:
♦ Capital – Islamabad
♦ Currency – Pakistani rupee
♦ Official languages – English, Urdu
♦ President – Arif Alvi
♦ Prime Minister – Imran Khan

Paytm teams up with Softbank, Yahoo to launch ‘PayPay’ service in Japan
On October 22 2018 Paytm, run by One 97 Communications Ltd has launched a QR-based smartphone payment service called ’PayPay’ in Japan in collaboration with SoftBank and Yahoo Japan Corporation.

i. PayPay allows users to store money from a bank account in their “PayPay” wallet and aims to promote the use of cashless payment in Japan.Japan accounts for only 20% of overall cashless transactions in the country.
ii. Yahoo Japan will terminate its current smartphone settlement function “Yahoo! Wallet” with the launch of payment service called “PayPay”.
PayPay
PayPay is build around the QR (quick-response) code technology that Paytm set up in 2015, which currently offers mobile payments to more than 350 million customers and over 9.5 million merchants.

IL&FS appoints three advisors for debt resolution plan
On October 22 2018 IL&FS(Infrastructure Leasing & Financial Services) board of directors has appointed Arpwood Capital Pvt Ltd and JM Financial Consultants Pvt Ltd as financial and transaction advisors(FTAs) for the company.
i. Alvarez & Marsal has been appointed for the group with the mandate to maintain strict controls and manage day-to-day liquidity, evolve a resolution plan, and manage stakeholders with regards to the implementation of the resolution plan.
ii. IL&FS and its subsidiaries have defaulted on several debt repayments recently due to liquidity crisis.
iii. Infrastructure builder and financier IL&FS has accumulated debts of Rs 90,000 crore and recently defaulted on a host of short-term borrowings.
iv. The central government stepped in to replace the board of directors with a new board led by banker Uday Kotak.
About IL&FS(Infrastructure Leasing & Financial Services)
♦ CEO  –   Arun K. Saha
♦ Headquarters –  Mumbai
♦ Founded  –  1987

Superflares from young stars may imperil planets: NASA
Scientists have found that violent flares from the host star might make planets orbiting it, uninhabitable by affecting their atmospheres, using National Aeronautics and Space Administration (NASA)’s Hubble Space Telescope.
Key Points:
i. NASA’s Hubble telescope is observing such stars through a large programme called HAZMAT (Habitable Zones and M dwarf Activity across Time).
ii.  This programme is an ultraviolet survey of red dwarfs at 3 different ages: young, intermediate, and old.
iii. As per NASA, stellar flares from red dwarf star, are particularly bright in ultraviolet wavelengths, compared with Sun-like stars.
iv.  Red dwarf is the smallest, most abundant and longest-lived type of star in our galaxy. Hubble’s ultraviolet sensitivity helps to observe these flares.
About NASA (National Aeronautics and Space Administration):
♦ Administrator – Jim Bridenstine
♦ Headquarters – Washington, D.C., US 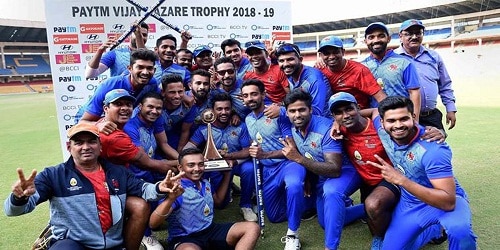 Kimi Raikkonen wins US Grand Prix with Lewis Hamilton unable to get fifth F1 title
On October 21 2018 Ferrari’s Kimi Raikkonen claimed his first victory of F1 race US Grand Prix in Texas. It was the longest gap between wins in F1 history, beating the previous mark of Italian Riccardo Patrese. Praveen Kumar retires from all forms of cricket
On 20th October 2018, Indian pacer Praveen Kumar announced his retirement from all forms of cricket.
Key Points:
i. Praveen Kumar is 32 years old. He hails from Meerut, Uttar Pradesh.
ii. He represented India in 84 international matches between 2007 and 2012 and gained 112 wickets in Tests, One Day Internationals (ODIs) and Twenty20 International (T20I).
iii. He made his ODI debut in 2007. He is known for his ability to swing the ball in both ways.
iv. He also played for Kings XI Punjab, Royal Challengers Bangalore, Sunrisers Hyderabad, and Gujarat Lions teams in the Indian Premier League (IPL) tournament. He took 90 wickets in 119 matches.
v. He played a major role in India’s title win in the Commonwealth Bank ODI tri-series in Australia in 2008.
vi. He is also India’s highest wicket-taker on England tour in 2011, where he took 15 wickets in 3 Tests

i. He is 40 years old. He is a left-arm bowler. He made his Test debut in 1999.
ii. He has played 92 Test matches and has taken 430 wickets with an economy rate of 2.81.
iii. He is Sri Lanka’s second highest wicket-taker after Muttiah Muralitharan, who has taken 800 Test wickets.

Japanese Nobel chemistry laureate Shimomura passes away at 90
On Oct.19 2018 Marine biologist Osamu Shimomura ,the Nobel Prize winner in chemistry has died at the age of 90. 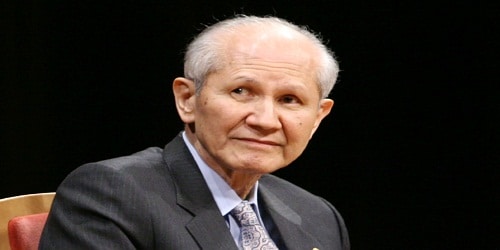 i. Shimomura and two American scientists shared the 2008 Nobel Prize for the discovery and development of a jellyfish protein that later contributed to cancer studies.
ii. Shimomura was born in northern Kyoto in 1928 and studied in Nagasaki,Japan. Shimomura was based in the U.S., but had moved back to Nagasaki.