We are here for you to provide the important Current Affairs October 18 2018, which have unique updates of all daily events from all newspapers such as The Hindu, The Economic Times, PIB, Times of India, PTI, Indian Express, Business Standard and all Government official websites. 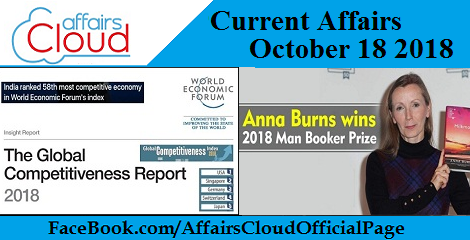 NITI Aayog launches guidelines for public-private partnership in treatment of NCDs
On 17th October 2018, NITI Aayog released model guidelines for Public – Private partnership (PPP) in Non-Communicable Diseases (NCDs).
Key Points:
i. According to the guidelines, the private partner will invest in upgrading, building and deploying human resources and hold the responsibility for operational management and service delivery.
ii. State governments will offer necessary physical space. Tariff structure for services offered under NCD care facility could be linked to the existing state and Central Government Health Insurance scheme.
iii.  If a government health insurance scheme is introduced in a state after adoption of CGHS (Central Government Health Scheme) tariff, tariff rates should be revised to the newly introduced scheme.
iv. All service under NCD care facility will be offered by a single entity: a trust, company or consortium under the PPP arrangement.
About NITI Aayog:
♦ CEO – Amitabh Kant
♦ Chairperson – Narendra Modi
♦ Vice Chairperson – Dr. Rajiv Kumar

i. This expected to finish within a year with a cost 271 crore rupees. It will represent the works and contributions of all prime ministers for our country.
ii. The new museum will incorporate the Nehru Memorial Museum and Library (NMML)at the Teen Murti estate, the official residence of India’s first Prime Minister Jawaharlal Nehru.

RK Singh launches award scheme under ‘Saubhagya’ for achieving 100 % household electrification
On 15th October 2018, RK Singh, Minister of State (IC) for Power and New & Renewable Energy announced an award scheme under Saubhagya to felicitate the DISCOMs (Distribution Companies) / Power Department of States and their employees for achieving 100 % household electrification.
Key Points:
i. 8 states(Andhra Pradesh, Gujarat, Goa, Haryana, Himachal Pradesh, Kerala, Punjab and Tamil Nadu) which had already achieved more than 99 % household electrification before the launch of Saubhagya are not eligible for the awards.
ii. Awards will be given in 3 categories for DISCOMs / Power Departments of:

MoU signed between Lady Irwin College & Ministry of Rural Development for Roshni
On 16th October 2018, Deendayal Antyodaya Yojana – National Rural Livelihood Mission (DAY-NRLM), Ministry of Rural Development (MoRD) and Lady Irwin College signed a Memorandum of Understanding (MoU) to establish Roshni – Centre of Women Collectives led Social Action.
Key Points:
i. Roshni is technically and financially supported by UNICEF India. It serves as a technical support unit at national level for DAY-NRLM. It is embedded in the Department of Development Communication and Extension, Lady Irwin College, New Delhi.
ii. Roshni aims to work with women collectives for social action on Food, Health, Nutrition and WASH (FHNW) interventions in line with DAY-NRLM Dashasutra (10 principles) strategy.
iii. It will support the implementation of convergent action plan under POSHAN Abhiyaan.
iv. Roshni will learn from Swabhimaan initiative and similar models. Swabhimaan was launched in 2016 to focus on women’s nutrition.
v. It is a joint initiative of DAY- NRLM and UNICEF India in 5 poorest DAY-NRLM resource blocks in 4 districts of 3 Indian states: Bihar, Chhattisgarh and Odisha. 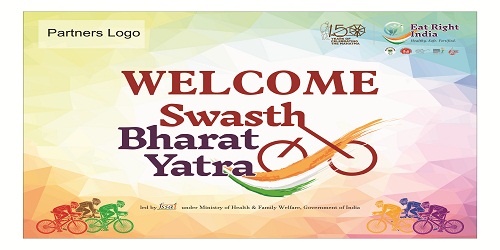 Initiative by Government:
The Government gives an annual subsidy of about Rs.2 Lakh crore with public Distribution System and through other welfare Schemes in order to make available of foods to all the people.
Key Points:
i. The Campaign is Launched by Central Governmnet association with the State Government and it is led by the Food Safety and Standards Authority of India (FSSAI).
ii. The ‘Swasth Bharat Yatra’ is launched simultaneously at Leh(in Jammu & Kashmir),Panaji(Goa),Thiruvananthapuram(Kerala),Puducherry,Ranji(Jharkhand) and Agartala(Tripura).
iii. Around 7500 Cyclists are to be participated in over 18000 Km relay cycle across the states and UT for 100 days from October 16 to January 27.
iv. This Campaign will spread message’s like ‘Eat Right India’,’Eat Right Mobile Unit’ and ‘Mobile Food Testing Unit’.
About the Index:
In Global Hunger Index,India Ranked 103rd Position out of 119 Countries.
About FSSAI:
♦ Formed:August 2011
♦ Chairman:Preeti Sudan
♦ CEO: Pawan Kumar Agarwal
♦ Headquarter:New Delhi. 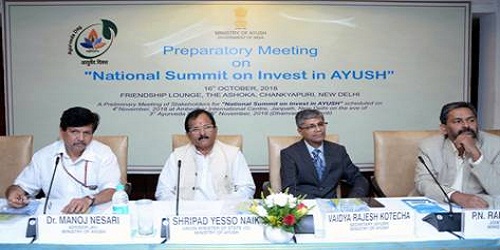 Objective:
This Summit is to encourage all the Departments of the Government and Private Companies to invest in AYUSH.
KeyPoints:
i. Many Initiatives are taken by Ministry to increase the market size of AYUSH for this they had a close relationship with FICCI,CII,PHD Chambers and ASSOCHAM etc.
ii. To strengthen the existing AYUSH Industry sector including manufacturers of AYUSH drugs, cosmetics, food supplements, hospital industry, etc.
iii.  Under the Champion Sector Scheme the Ministry  has taken a challenge to create one lakh job opportunities in AYUSH Sector .
iv. The Ministry tied up with Ministry of railways has agreed to set up AYUSH wing in 5 railway hospitals.
MOU’s Signed:
To achieve this,AYUSH minister signed an MOU with the Ministry of Micro Small and Medium Enterprises(MSME) to develop entrepreneurs in AYUSH Sector.
Initiative taken by the Government:
The Government of India allowed hundred percent Foreign Direct Investment
Achievement:
There is a global demand in the AYUSH and Herbal Product and the Export of the product has been increased from USD 354.68 million in the year 2014-15 to USD 401.68 million in the year 2016-17.

Justice Verma panel report wanted changes to sexual harassment
On October 14 2018,Central govt. had announced its plan to set up a panel of judges headed by the Justice J.S. Verma to look into the legal and institutional framework to control sexual harassment at workplaces after the impact of #MeToo campaign.
i. This will ensure that women are protected against sexual harassment at all the work places in both Public and private. The sense of security at the workplace will improve women’s participation in work, resulting in their economic empowerment and inclusive growth.
ii. In early 2013,a three-member committee headed by former judge J.S. Verma including Justice Leila Seth and senior lawyer Gopal was formed after a brutal sexual assault on a 23-year-old physiotherapy student on a moving bus in New Delhi.
iii. They termed Sexual Harassment Bill “unsatisfactory” and said it did not reflect the spirit of the Vishakha guidelines framed by the Supreme Court in 1997 for the sexual harassment at the workplace.
Vishakha guidelines:-
A set of procedural guidelines for sexual harassment cases in India. They were promulgate by the Indian Supreme Court in 1997 and were superseded in 2013 by the Sexual Harassment of Women at Workplace (Prevention, Prohibition and Redressal) Act, 2013. 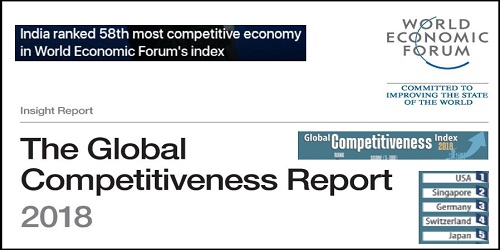 RBI norms to facilitate payments between mobile wallets using UPI
On October 17.2018,The Reserve Bank of India (RBI) on released guidelines to facilitate payments among different mobile wallets, a move aimed at promoting digital transactions.
i. The inter-operability would be achieved in a phased manner such as inter-operability of PPIs issued in the form of wallets through UPI, between wallets and bank accounts through UPI, and interoperability for PPIs issued in the form of cards through card networks.
ii. UPI is a payments system launched by the National Payments Corporation of India in August 2016. It facilitates instant fund transfer between two bank accounts on the mobile platform, without having to provide any detail of the beneficiary’s bank account.
iii. MobiKwik, Oxigen, Paytm, ItzCash, and Ola Money are some of the popular mobile wallets in the country.

NIIF invests Rs 660 cr in HDFC Capital realty platform
i. National Investment and Infrastructure Fund (NIIF) an investment of Rs 660 crore in HDFC’s real estate investment platform HDFC Capital Affordable Real Estate – 2 (H-CARE 2) .It enables investors in NIIF Fund of Funds to participate in the attractive mid-income and affordable housing sectors in India.
ii. H-CARE 2  has a wider platform targeting affordable and mid-income residential projects in India and will play a significant role in progressing towards the government’s flagship programme, Housing for All by 2022. 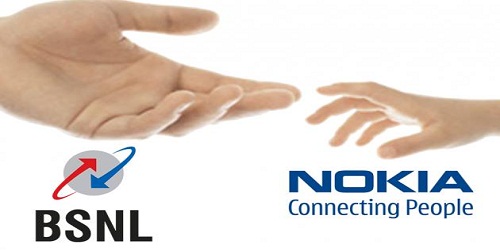 i. BSNL and Nokia are demonstrating the ability to leverage automation across industries, showing how it can be replicated in other sectors such as automobile, oil and gas, mining, public safety and disaster management.
ii. Nokia factory will now leverage Industry 4.0 solutions such as Augmented and Virtual Reality (AR/VR), connected Robotics, Artificial Intelligence, Big Data Analytics, and the Internet of Things to enhance operations and increase productivity.
iii. Industry 4.0 relies on low-latency, high-reliability networks as well as capabilities in robotics and artificial intelligence to drive new levels of automation and data exchange in manufacturing industries, resulting in improved operational efficiency and reduced costs. KeyPoints:
i. Anna Burns,Milkman is her third full length Novel.Other 2 novels are ‘No Bones’ and ‘Little Constructions’.
ii. Milkman is an exploration of Northern Ireland’s three decades of sectarian violence told through the voice of a young woman.It is Published by Faber & Faber.
iii. Anna was Presented with the a trophy and a cheque worth 50,000 Euro.
About Man Booker Group:
♦ CEO:Luke Ellis
♦ Established:1969. 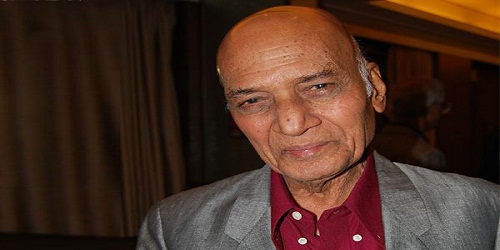 Key Points:
i. The award consists of a cash prize of Rs 100,000 and a memento. It will be presented by Maharashtra Chief Minister Devendra Fadnavis at a ceremony on October 26, 2018 in Mumbai.
ii. Khayyam is a music composer, lyricist and writer. He is 91 years old. He started his music career in Ludhiana in 1943.
iii. He has received Padma Bhushan, National Award, Filmfare Award, etc. In 2016, along with his wife Jagjit Kaur he started the ‘Khayyam-Jagjit Kaur KPG Charitable Trust’.
About Hridaynath Award:
♦ Instituted by – Hridayesh Arts
♦ Named after – Hridaynath Mangeshkar, the youngest brother of Lata Mangeshkar
♦ This year’s award ceremony marks the 81st birthday of Hridaynath Mangeshkar

Chinese scientists develop nanogenerator to power wearable electronics
Chinese scientists have developed a new nanogenerator that can apply energy from human motions to continuously power wearable electronic devices.
i. Scientists of Zhengzhou University have developed a washable and wearable nanogenerator based on hydrophobic nanofiber.
ii. It has a woven structure. It can be attached to clothes to convert mechanical energy generated by human activities into electrical energy. This research was published in the Journal of Materials Chemistry A.

World’s first lab-grown oesophagus implanted in mice
For the first time in the world, scientists have grown functional sections of oesophagus in the lab using stem cells and successfully transplanted them into mice.
i. A study regarding this by researchers at the Francis Crick Institute in the UK and colleagues has been published in the journal Nature Communications.
ii. This development is the first of its kind for a complex multi-layered organ. This will help in overcoming the challenge of regenerative medicine, that different early-stage cells need different conditions to develop into the right cell type.
iii. This will help in developing treatments for children with oesophageal defects. Key Points:
i. Suheil F. Tandon is a social Entrepreneur. He is the Founder of Pro Sport Development (PSD) and Executive Director of Martha Farrell Foundation.
ii. International Olympic Committee (IOC) redistributes more than 90 % of its income to the wider sporting movement, to help athletes and sports organisations throughout the world.
iii. These grants are worth USD 25,000 each. They are awarded to grassroots organisations conducting effective sport for all programmes in various parts of the world.
iv. The award function was held during the Olympism in Action forum held in Buenos Aires, Argentina, on 5th and 6th October 2018.
About International Olympic Committee (IOC):
♦ Headquarters – Lausanne, Switzerland
♦ President – Thomas Bach