﻿We are here for you to provide the important Current Affairs October 10 2018, which have unique updates of all daily events from all newspapers such as The Hindu, The Economic Times, PIB, Times of India, PTI, Indian Express, Business Standard and all Government official websites. 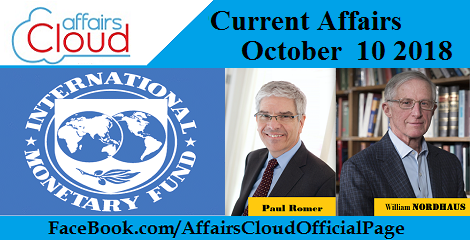 Shri Nitin Gadkari laid the Foundation Stone for various developmental projects in Uttar Pradesh
On October 9, 2018, Union Minister for Shipping, Road Transport & Highways and Water Resources, River Development & Ganga Rejuvenation Shri Nitin Gadkari laid foundation stone for various development projects at Basti in Uttar Pradesh.
National Waterway (NW)-40 at Basti in Uttar Pradesh:
i. This project undertakes development work of 354 km stretch of Ghagra river under the Sagarmala Programme of Ministry of Shipping.
ii. In 2016, the waterway from Manjhighat at Ganga-Gaghra river confluence to Faizabad/Ayodhya along Gaghra River was declared as NW-40.
iii. It will provide major transportation boost for cargo and passenger movement and envisages terminal at 5 locations – Ayodhya, Mahirpur (Tanda/Kalwari), Dohrighat, Tortipar and Manjhighat.
iv. Phase –I of the project with project cost of Rs. 11.6 Cr has been initiated by Inland Waterways Authority of India (IWAI), under Ministry of Shipping.
v. It is scheduled to be completed by 2019-20.
Other News:
i. He also laid the foundation stone for widening and improvement of Rs 1224 crore worth of National Highways works in Uttar Pradesh.
ii. The projects includes: 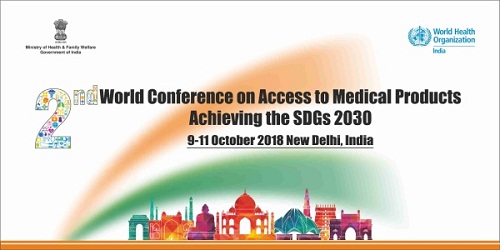 i. The objectives of the conference is:

ii.  The following was released:

i.  It is a part of 150th Birth Anniversary celebrations of Mahatma Gandhi being held over the next one year.
ii. For this, MEA had collaborated with charitable organization Bhagwan Mahaveer Viklang Sahayata Samiti, BMVSS.
iii.This initiative comprises of a year-long series of artificial limb fitment camps in a number of countries spanning the globe fully sponsored by Ministry.
iv. Initially,the camps will be held in 12 countries identified through the Missions with financial support of Indian government.
About Bhagwan Mahaveer Viklang Sahayata Samiti, BMVSS:
♦ Founded in 1975.
♦ Famous for: trademark limb Jaipur Foot.
♦ Till date it has served over 1.73 million amputees.
♦ Founder: DR Mehta.

10-member government panel set to probe e-commerce firms’ big discounts
On October 8, 2018, the Corporate affairs ministry set up a 10-member panel to check on the discounts offered by the online retailers.
i. The panel will set probe to:

ii. These came to the forefront as traditional retailers requested the commerce minister to impose a ban on discounted sales by online sellers.
iii. This is possible due to access of e-retailers to foreign direct investment (FDI) which allows them t offer discounts.
Background:
Earlier in 2015, Retailers Association of India (RAI) and the All India Footwear Manufacturers and Retailers Association (AIFMRA), had approached the Delhi High Court on this topic.
Ministry of Corporate Affairs:
♦ Union Minister : Arun Jaitley
♦ Minister Of state: P. P. Choudhury.

iii.The EPCA is mandated to enforce Graded Response Action Plan (GRAP) in the city as per the pollution levels.
iv. The tenure of the last EPCA expired on October 3.
About EPCA:
EPCA is Supreme Court mandated body tasked with taking various measures to tackle air pollution in the National Capital Region. 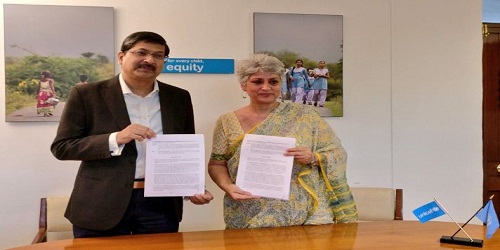 Objective:
To create awareness and use technology in the right way to protect children’s rights
Key Points:
i.According to the MOU, they will focus on 2 areas:

ii. Together the organizations will co-create sensitisation workshops across India through online and offline interventions such as Tweet chats, webinars, meetups and roadshows. 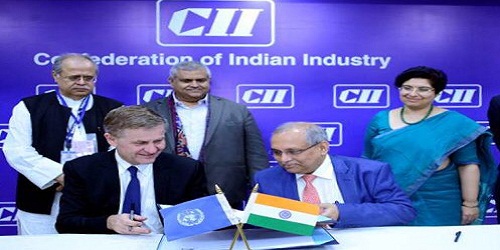 i.This MOU aims to work on coherent implementation of the environmental dimension of sustainable development.
ii.  It aims to promote cooperation in issues of environment, climate change, renewable energy, energy efficiency, resource conservation and management, water sanitation, smart cities and urban infrastructure.
iii. As per the MOU, the Un-plastic Initiative of CII and UN Environment will rope in industry to take actions to curb plastic pollution.

Country’s first 58-acre biofuel plant to be set up at Bargarh district of Odisha by BPCL
On October 9, 2018, Governor of Odisha Prof Ganeshi Lal laid the foundation stone on country’s first 58-acre Second Generation (2G) Ethanol Bio-Refinery plant at Baulsingha village in Bargarh district of Odisha.
This was announced in the presence of Union Minister for Petroleum and Natural Gas Dharmendra Pradhan. About the Plant:
i. This refinery will be set up by Bharat Petroleum Corporation Limited (BPCL) .
ii. The estimated cost of the project is Rs. 1000 crore.
iii. It will be producing 3 crore litre of fuel grade ethanol annually.
iv.  Commercial production will start from 2020.
v. It is one among 12 refineries planned in 11 States in the country.
vi.  It will utilise about two lakh tonne of rice straw annually from locations like Bhatli, Ambabhona, Attabira, Sohela, Burla and Lakhanpur.
vii.  And it will be based on zero-liquid discharge plant technology where water will be recycled back into the plant.
Other News:
BPCL is setting up bio-refineries in Madhya Pradesh and Maharashtra.
Background:
India has surplus biomass availability of about 160 MMT annually which if converted has the potential to yield 3000 crore litre of ethanol.
National Biofuel Policy 2018:
This policy aims 20 per cent ethanol blending to petrol by 2030 from the current 3% -4%.
Odisha:
♦ Chief Minister: Naveen Patnaik.
♦ Governor: Prof. Ganeshi Lal.
♦ Lakes : Chilika Lake, Kanjia Lake, Anshupa Lake, Balimela Reservoir.
♦ Dams: Rengali Dam, Kala dam, Pitamahal Dam, Kansbahal Dam, Tikhali Dam, Deras Dam, Salia Dam, Ghodahada Dam, Kuanria Dam.
♦ Festivals: Kalinga Mahotsav, Chandan Yatra, Durga Puja, Konark Dance Festival, Rath Yatra, Deepabali, Kumar Purnima.
BPCL:
Headquarters: Mumbai. 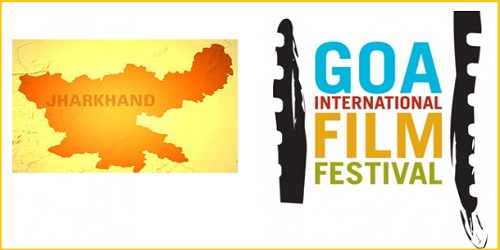 Achievements of the Summit:
i. As part of the Summit, upto 1,500 Indian and foreign investors had participated in the two-day conclave.
ii. 601 MOUs worth Rs 1,20,150 crore had been signed.
iii. The investments focused on various sectors such as- tourism, health and wellness, pharmaceuticals, food processing, film shooting, biotechnology, and renewable energy.
iv. Some of them are:

“Clear Sky 2018”: Ukraine launched large-scale air exercises with NATO countries
On October 9, 2018, Ukraine along with United States and other NATO countries launched “Clear Sky 2018” war games, which will run until October 19, in western Ukraine.
Objective:
To secure air sovereignty and promote peace and security.
Key Points:
i. 700 troops are participating with NATO countries such as the United States, Britain, the Netherlands, Poland and Romania.
ii. US will be represented by F-15C Eagle fighter planes and C-130J Super Hercules.
Ukraine:
Capital: Kiev.
Currency: Ukrainian hryvnia.

National Housing Bank increased refinancing limit towards eligible institutions
On October 8, 2018, National Housing Bank announced increase of the Refinance limit to Rs.30,000 crore from the previous Rs. 24,000.
i. With this eligible Housing Finance Companies & Other entities will have increased availability of funds.
ii. The initial sanctioned limit was set to Rs. 24,000 crore for the current year (July 2018-June 2019) to refinance and credit Housing Finance Companies & other Institutions.
iii. Till date, Rs.8835 crore has been sanctioned.
About National Housing Bank (NHB) : i. In 2017-18, India had recorded a 6.7 per cent growth rate.
ii. This was published in the IMF’s World Economic Outlook Report.
iii. For 2019, the GDP prediction has been decreased compared to the April 2018 World Economic Outlook (WEO) report.
iv. The reason for the decrease is due to increase in oil prices and the tightening of global financial conditions.
v. The measures for development that has been taken for ease of business are:

vi. India will regain the tag of the fastest growing major economies of the world with a strong medium-term growth estimated at 7.75 per cent due to ongoing structural reform.
vii.  It will cross China by 0.7 percentage point in 2018 and 1.2 percentage point growth lead in 2019.
viii.China was the fastest growing economy in 2017 ahead of India by 0.2% but new projection have been lowered for both India and China by 0.4 per cent and 0.32 per cent respectively.
ix.China is expected to have a moderate growth from 6.9 per cent in 2017 to 6.6 per cent in2018 and 6.2 per cent in 2019.
x.This reduction is due to the negative effect of recent tariff actions reducing external demand growth.
IMF:
♦ Full Form: International Monetary Fund.
♦ Headquarters: Washington, D.C.
♦ MD: Christine Lagarde. 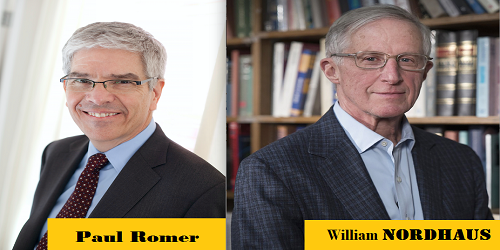 Key Points:
i. William Nordhaus is a professor at Yale University. In 1990s, he became the first person to develop a quantitative model that described the interplay between economy and climate.
ii. Paul Romer is from New York University’s Stern School of Business. He has shown how economic forces govern the willingness of firms to produce new ideas and innovations. This laid the foundation for endogenous growth theory.
About Nobel Prize in Economics:
♦ Prize money – 9 million Swedish crowns ($1 million)
♦ Established – 1968
♦ This prize was not part of the original group of 5 awards mentioned in Alfred Nobel’s 1895 will. 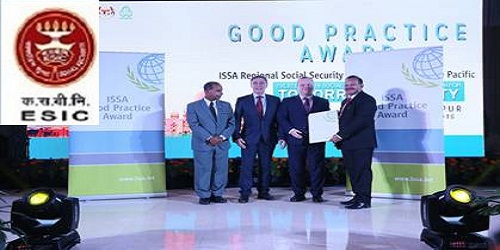 Scientists develop tiny spheres to trap water contaminants (bisphenol A)
Scientists of Rice University, US, have developed tiny spheres that can catch and destroy bisphenol A (BPA), a synthetic chemical used to make plastics that contaminates water.
i. They have developed micron-sized spheres that look like flower-like collections of titanium dioxide petals. On its surface cyclodextrin is stored.
ii. It has a hydrophobic (water-avoiding) cavity and a hydrophilic (water-attracting) outer surface.
iii. BPA is hydrophobic and is attracted to the cavity. It is trapped and degraded to harmless chemicals through reactive oxygen species (ROS) produced by the spheres. 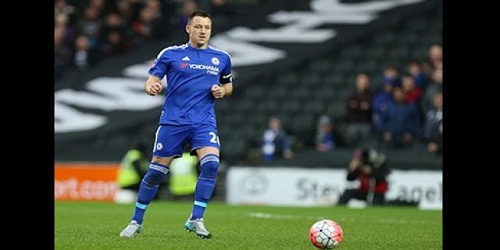 Key Points:
i. John Terry is 37 years old. He was a central defender. He has decided to take up a career in management following his retirement.
ii. For most of his career he played with the Chelsea club. He also captained Aston Villa club. He was capped 78 times by England.
iii. When he was with Chelsea he won 5 Premier League titles, 5 FA Cups, and the Champions League and Europa League.
iv.  He made his debut in October 1998 when he was 17 years old. He has made more than 700 appearances for Chelsea. 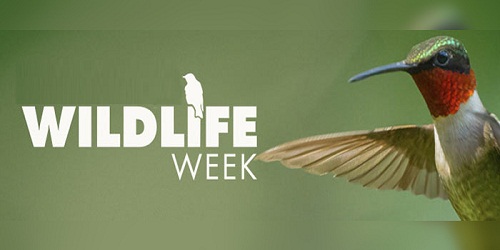 Key Points:
i. Wildlife Week is observed every year from October 2 to 8.Wildlife Week is celebrated since 1952.
ii. Minister of State of Environment, Forest and Climate Change, Dr. Mahesh Sharma addressed the event.
iii. He also inaugurated a bio-methanation plant under an MoU between Bhabha Atomic Research Centre (BARC) and Ministry of Environment, Forest and Climate Change. The capacity of plant will be 3 Metric Tonnes per day.
iv. He also planted a sapling in the premises of National Zoological Park. He performed a cleanliness drive under Swachh Bharat Abhiyaan along with children.
About Bhabha Atomic Research Centre (BARC):
♦ Director – Mr. Kamlesh Nilkanth Vyas
♦ Headquarters – Mumbai