We are here for you to provide the important Current Affairs November 5 2018, which have unique updates of all daily events from all newspapers such as The Hindu, The Economic Times, PIB, Times of India, PTI, Indian Express, Business Standard and all Government official websites. 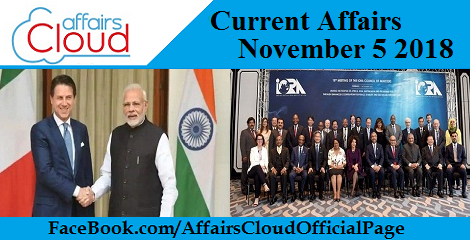 Overview of Prime Minister of Italy Mr. Giuseppe Conte’s 1-day visit to India
i. The highlight of the visit was the Italian prime minister’s participation at the 24th edition of the India-Italy Technology Summit was held in New Delhi.
ii. Following are the important discussions that took place

ii. 3 broad based subjects were discussed. They were:

iii. It had 2 special sessions on: This will be done under Pradhan Mantri Ujjawala Yojana (PMUY).
i. The MOU was signed in presence of:

ii. The MOU consists of the following:

iii. Common Services Centre will help the beneficiaries in the following ways:

Other Announcements:
i. Ministry of Petroleum & Natural Gas announced appointment of 1 Ujjawala Didi for every 5 villages whose prime responsibility is to support and give service to Ujjawala Beneficiaries.
ii. CSCs will conduct session in 100 LPG Panchayats where one hour training and demo will be given to Ujjawala beneficiaries on safety mode of using gas cylinders and on Refill option.
iii. Village Level Entrepreneurs will be given incentives for delivery of services.
iv. CSCs will work at the grass root level and provide Ujjawala connections and this is expected to rise to involve over 1 lakh CSCs in upcoming 2-3 months.
Pradhan Mantri Ujjawala Yojana (PMUY):
♦ Launched: May 1st, 2016 in Ballia, Uttar Pradesh.
♦ Pradhan Mantri Ujjwala Yojana (PMUY) aims to safeguard the health of women & children by providing them with a clean cooking fuel – LPG, so that they don’t have to compromise their health in smoky kitchens or wander in unsafe areas collecting firewood.
♦ Under this scheme, 5 Cr LPG connections will be provided to BPL families with a support of Rs.1600 per connection in 3 years.
♦ The connections will be issued in the name of women of the households to empower women.
♦ Rs. 8000 Cr. has been allocated towards the implementation of the scheme.
♦ Identification of the BPL families will be done through Socio Economic Caste Census Data.
♦ Achievement: Under Pradhan Mantri Ujjawala Yojana (PMUY), release of 5.75 Crore Ujjawala connections has been successful in just two and half years.

On October 30, 2018, External Affairs Minister Smt. Sushma Swaraj reached Kuwait, the ‘Land of the Pearls’ to start her 2-day visit to the country. 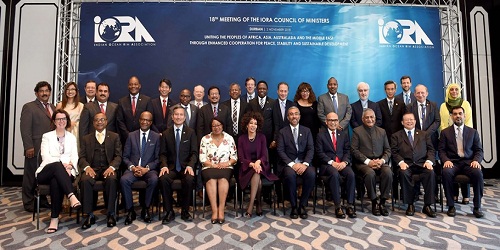 i. The Theme of the IORA meeting was: “IORA: Uniting the Peoples of Africa, Asia, Australasia and the Middle East through enhanced cooperation for Peace, Stability And Sustainable Development”.
ii. South Africa is the current chairman of the IORA organization.
iii. The Meeting was chaired by Honourable Minister Lindiwe Sisulu, Foreign Minister of International Relations and Cooperation of the Republic of South Africa, and Chair of the Association.
iv. Declaration on Guidelines for Enhancing Interaction with Dialogue Partners in IORA was adopted.
v. The eThekwini Communique was produced as the final outcome document of the 18th COM.
vi. Launch of a special initiative entitled the “IORA Nelson Mandela ‘Be the Legacy’ internship programme” was done to empower the youth and pay tribute to Nelson Mandela.
vii. Maldives was admitted as the 22ndmember of the Association while Turkey and the Republic of Korea were admitted as the 8th and 9th Dialogue Partners in IORA. This made membership of IORA increase to 22 and the number of Dialogue Partners was increased to 9.
MOUs signed:
i. The following MOUs were signed:

India’s participation:
i. India was represented by: Gen.(Dr.) VK Singh (Retd.), Minister of State for External Affairs.
ii. In his address, he mentioned the following:

Other Important News:
i. South Africa will hand over Chairmanship of IORA to UAE in 2019 and Bangladesh will assume the Vice-Chairmanship of IORA.
ii. This took place during the on-going celebrations of the 150th year of the birth anniversary of Mahatma Gandhi and the 100th birth anniversary of Nelson Mandela and the birth centenary of Sheikh Zayed bin Sultan Al Nahyan, Founder of the United Arab Emirates.
IORA:
♦ Full Form: Indian Ocean Rim Association.
♦ Headquarters: Mauritius.
♦ Established: 7 March 1997.
♦ Secretary-General: Dr. Nomvuyo N. Nokwe.

Singapore is Asia’s most sustainable city: Arcadis
Singapore has maintained its rank as number one Asian city in the Sustainability Index by engineering firm Arcadis.
Key Points:
i. The Sustainability Index assessed cities based on 3 pillars: profit pillar, people pillar and planet pillar.
ii. Singapore secured fourth place in global rankings. As per the study, Singapore ranked first for the profit pillar that assesses the business environment and economic performance of cities.
iii. Singapore ranked 31st out of 100 cities, for the people pillar that tests social mobility and quality of opportunity and life.
iv. Singapore secured 41st spot for the planet pillar that assesses the management of energy use, pollution and emissions.
v. As per the study, Singapore is one of the world’s most active Connected and Autonomous Vehicles (CAV) testing environments.
About Singapore:
♦ Capital – Singapore
♦ Currency – Singapore dollar
♦ Official languages – English, Malay, Mandarin, Tamil
♦ President – Halimah Yacob
♦ Prime Minister – Lee Hsien Loong 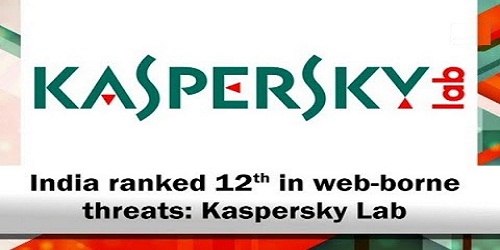 Key Points:
i. In the 3rd quarter (July- September), 32.8 % of users were attacked by web-borne threats in India.
ii. Kaspersky Lab products detected 48,093,743 Internet-borne malware incidents on computers of KSN participants in India.
iii. Regarding vulnerabilities in browsers and their plugins (drive-by download), infection happened when visiting an infected website, without any intervention from user and without their knowledge.
iv. This is the most used method by cybercriminals for these kind of attacks.
v. During July-September 2018, Kaspersky Lab products detected 68,405,291 local malware incidents on computers of KSN participants in India.
vi. Overall, 56.1 % of users in India were attacked by local threats during this period, placing India at 53rd sport globally.
About Kaspersky Lab:
♦ CEO – Eugene Kaspersky
♦ Headquarters – Moscow, Russia

Changsha Declaration for agricultural and rural development
On 3rd November 2018, over 20 countries committed to the Changsha Declaration at the end of a forum on international development cooperation in Changsha, China.
Key Points:
i. 26 countries and 11 international organisations including  Food and Agriculture Organisation (FAO), United Nations Children’s Fund (UNICEF), World Food Programme (WFP), and the World Health Organisation (WHO) signed the Changsha Declaration.
ii. The Changsha Declaration focuses on agricultural and rural development. It aims to eliminate poverty and hunger.
iii. It aims to enhance the efforts towards South-South Cooperation, an initiative for eliminating hunger and malnutrition through mutual sharing and exchange of good practices, resources, and know-how between countries of the global south.
iv. At the forum, Director-General for FAO Jose Graziano da Silva announced plans to set up an International Centre of Excellence for Agriculture Innovation and Rural Development in Beijing, China.
v. The centre will offer training in agriculture innovation and promote investment in rural areas to reach the first 2030 Sustainable Development Goal of zero hunger.
About Food and Agriculture Organisation (FAO):
♦ Director-General – Jose Graziano da Silva
♦ Headquarters – Rome, Italy

Banks allowed to invest in NBFC bonds to support raising money: RBI
On November 4, 2018, RBI allowed banks to support bonds sold by non-banking finance/housing companies.
i. According to the permit, it allowed banks to provide partial credit enhancement (PCE) to bonds issued by the systemically important non-deposittaking non-banking financial companies (NBFC-ND-SIs) registered with the Reserve Bank of India and Housing Finance Companies (HFCs)registered with National Housing Bank.
ii. This shall be done by maintaining the exposure limit of the bank within the aggregate PCE exposure limit of 20 percent.
iii. Additionally, the exposure of a bank should be restricted to 1 percent of its capital funds or net worth for a single borrower.
iv. This move will help for affordable housing finance and lower rated retail NBFCs by easing fund-raising by the NBFCs from the debt market. This will also remove the fear of defaults.
v. The bonds by the NBFCs shall have maturities not less than 3 years.
vi. The bank-backed-proceeds from the bonds should only be utilized for refinancing the existing debt of NBFCs or HFCs.
Background:
Commercial paper worth Rs 1 lakh crore will mature in November 2018 as shown by an estimate by a mutual fund house.
RBI:
♦ Founded: 1st April 1935.
♦ Headquarters: Mumbai.
♦ 24th Governor: Dr. Urjit Patel. 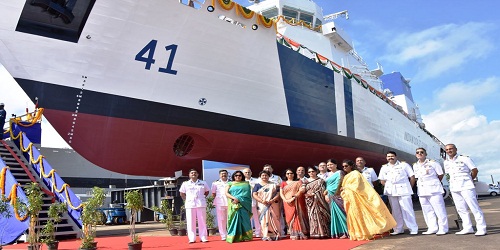 Key Points:
i. ICGS Varaha has been designed and built indigenously. This is the 3rd vessel in a series of 7 similar ships to be handed over to the Coast Guard.
ii. All the vessels would be delivered by March 2021. ICGS Varaha will be soon equipped with advanced navigation and communication equipment, sensors and machineries.
iii. The weapons will include a 30 mm gun with Fire Control Systems. It will be able to carry a twin-engine helicopter and 4 high-speed boats for Search and Rescue and Maritime Patrol.
iv. It also has pollution response equipment to hold the oil spill at sea.
About Indian Coast Guard:
♦ Director General – Rajendra Singh
♦ Headquarters – New Delhi 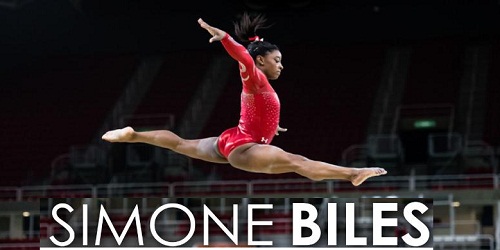 Ambati Rayudu retires from first-class cricket
Ambati Rayudu has retired from the long-form of cricket, including the Ranji Trophy, to focus on limited-overs cricket.
Key Points:
i. Ambati Rayudu is 33 years old. He will continue to play international and domestic matches of the shorter version.
ii. He has played first class cricket for 17 years. He made his debut when he was 16 years old. He has scored 6,151 runs in 97 matches and has scored 16 hundreds.
iii. He played his first ODI (One Day International) match in 2013.