We are here for you to provide the important Current Affairs November 18 2018, which have unique updates of all daily events from all newspapers such as The Hindu, The Economic Times, PIB, Times of India, PTI, Indian Express, Business Standard and all Government official websites. 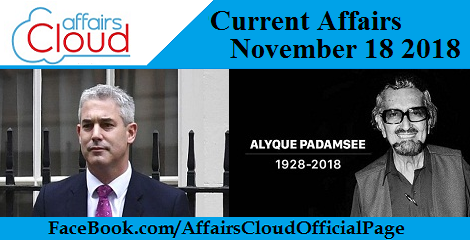 i. The IK-IGC was co-chaired by:

ii. The following topics were priority areas of discussion between the 2 parties:
Healthcare and pharmaceutical, environmental and technical safety, agriculture, information, tourism and culture, textiles and clothing, banking, labor and social development, mines and standards, metrology and certification sector.
iii. Kyrgyz proposed the creation of joint food and food processing ventures for agriculture and meat product for export to the Eurasian Economic Union (EAEU) markets.
iv. India would assist in incubation methods and breeding of fresh water fish, fish disease prophylactic treatment, primary processing and storage of fish and fish products, creation of electronic data base for the pastures, monitoring, assessment and conducting of remote sensing of mountainous pastures including geo-information system.
v. Both the parties decided to hold the 10th  meeting of the Kyrgyz-Indian inter-governmental Commission on Trade-Economic and Scientific-Technical Cooperation in Bishkek, Kyrgyz Republic.
Kyrgyzstan:
♦ Capital: Bishkek.
♦ Currency: Kyrgyzstani som.

DIPP Hosts Global Digital Content Market 2018
On 14th and 15th November 2018,The Department of Industrial Policy and Promotion (DIPP), Ministry of Commerce and Industry hosts, 2 days conference of Global Digital Content Market 2018 (GDCM 2018) in New Delhi .
i.  It was the 2nd edition of the conference, 1st edition was held in Geneva in 2016. India has been chosen as the host nation for GDCM 2018 by World Intellectual Property Organization (WIPO).
Key Points
i.  GDCM 2018 will feature various sessions on Films, Music, Broadcasting and Publication as well as collective management, emerging models and implication for market and the police makers.
ii. Asia Pacific region is the focus of this year’s conference.
iii. The aim of this year’s conference is to provide industry stakeholders a platform to come together and discuss new avenues in the music, gaming, music and creative industry.
iv. India has improved its ranking by 24 places from that of 2015 and now ranks 57thin Global Innovation Index 2018.
World Intellectual Property Organization
♦ Director General:Mr. Francis Gurry.
♦ Headquarter: Geneva, Switzerland.
Department of Commerce and Industry
♦ Union Minister:Mr. Suresh Prabhu
♦ Minister of State:Mr. C.R. Chaudhary .

Government to pay employers 7-weeks maternity leave given to staff
On 15th November 2018,The Women and Child Development Ministry announced that the Government will reimburse employers the salaries for 7 of the 26 weeks of maternity leave for women,who is earning more than Rs 15,000 a month
Key Points
i. This decision was taken to encourage the employers to hire women and keep them employed during maternity period.
ii. To become eligible for maternity benefits, a woman must has worked for 80 days in last 12 months.
iii. The salary of female employees will be refunded from labor Welfare Cess. As per government, till March 2017, 7500 crores out of 32632 crores of labor welfare cess fund was not utilized. So this fund will be used for reimbursement of salary of female employees.
iv. Maternity Benefits (Amendment) Bill 2016 increases the maternity leaves from 12 weeks to 26 weeks.
Ministry of Woman and child development
♦ Union Minister :Smt. Maneka Sanjay Gandhi
♦ Minister of state:Dr. Virendra Kumar.

iii. The meeting focused on the following: 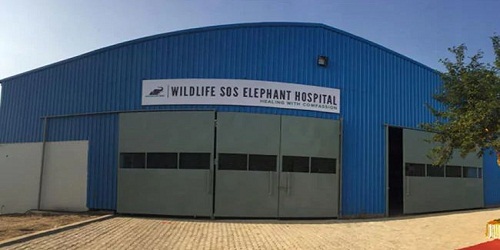 India, Morocco signed pacts to combat global terror including ISIS
On November 16, 2018, India and Morocco signed extradition, mutual legal assistance and defence cooperation treaties to jointly fight threats from ISIS under their counter-terror partnership.
i. The agreements were inked during Moroccan Justice Minister Mohamed Auajjar’s visit to Delhi on November 2018,
About the MOUs:
i. The counter-terror cooperation agreement will help in bilateral legal arrangements between the 2 countries through Morocco’s well-established school of counter-terrorism.
ii. The Indo-Moroccan Extradition Agreement will provide a strong legal base for the extradition of persons accused of economic offences, terrorism and other serious crimes in one contracting state and found in another contracting state.
iii. The Agreement on Mutual Legal Assistance in Civil and Commercial Matters will enhance cooperation in the service of summons, judicial documents, letters of request, and the execution of judgments, decrees and arbitral awards.
Background:
Both India and Morocco are part of the Non-Aligned Movement.
Morocco:
♦ Capital: Rabat.
♦ Currency: Moroccan dirham. 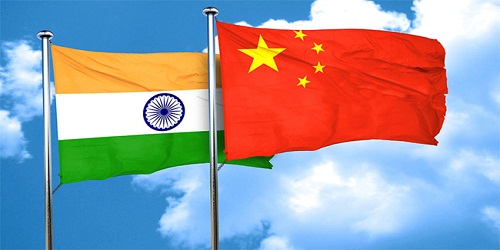 i. It was held between the two defence delegations headed by:
Defence secretary Sanjay Mitra and
Li Zuocheng, China’s deputy chief of Joint Staff Department of the Central Military Commission.
ii. This was after a one-year gap due to the Doklam standoff.
iii. The defence dialogue was held ahead of the 21st round of border talks between the special representatives of the two countries in the Chinese city of Dujiangyan on November 23-24.
iv. During the dialogue, both countries agreed:

v. The next round will be held in India in 2019.
Other News:
i. Mitra also called on Chinese state councillor and defence minister General Wei Fenghe.
ii. The two militaries will hold the annual ‘Hand-in-Hand’ drills in December 2018 in China after a one-year gap.
iii. The 21st round of border talks would be held National security advisor Ajit Doval and Chinese state councillor and foreign minister Wang Yi.
Background:
The annual dialogue did not take place in 2017 following the 73-day tense standoff between the two militaries at Doklam, which was triggered by the Chinese PLA’s plan to build a road close to the narrow ‘Chicken’s Neck’ corridor connecting India’s northeastern states in an area also claimed by Bhutan besides China.
China:
♦ Capital: Beijing.
♦ Currency: Renminbi.

i. It was signed by:

Government of India and ADB signed $105 Million Loan to Support Hydropower Transmission in Himachal Pradesh
On November 16, 2018, the Asian Development Bank (ADB) and the Government of India signed a $105 million loan to continue financing the transmission system upgrades in Himachal Pradesh.
i. This was the tranche 3 loan of the $350 million multi-tranche financing facility (MFF) for Himachal Pradesh Clean Energy Transmission Investment Program approved by the ADB Board in September 2011.
ii. This loan would help in increased supply of hydropower to the state and the national grid and supports the institutional capacity development of the state transmission utility.
iii. The executing agency for this project is: Himachal Pradesh Power Transmission Corporation Limited (HPPTCL).
iv. The loan will have a 25-year term, including a grace period of 5 years.
v. It will have an annual interest rate based on the London interbank offered rate (LIBOR), and a commitment charge of 0.15% per year.
ADB:
♦ Headquarters: Manila, Philippines.
♦ President: Takehiko Nakao.
♦ Established in 1966.
♦ Members: 67 (48 regional members).

Fitch Affirms India’s rating at ‘BBB-‘; outlook stable
Credit Rating Agency Fitch affirmed India’s “Long term Foreign-currency Issuer Default Rating (IDR)” at ‘BBB-‘with a stable outlook.Fitch kept India’s Credit rating unchanged for the 12th year in a row.
Key Points
i. Fitch Ratings is one of the big three credit agencies of the world. Other two are Moody’s and Standard & Poor’s.
ii. Fitch had last upgraded India’s Sovereign rating from ‘BB+’ to ‘BBB-‘with stable outlook in 2006.
iii. Fitch expects India’s economy to grow with a growth rate of 7.8 in fiscal year ending on 31 March 2019 and 7.3 in FY20 and FY21.
iv. Fitch expected current-account deficit to widen to 3 per cent in FY2018-19 and 3.1 per cent in FY2019-20 from 1.9 per cent in FY2017-18.
v. Fitch says that Indian Economy is vulnerable to shifts in global market sentiments due to global trade tensions and U.S. Monetary tightening.
Points to Remember:
In World Bank’s Ease of Doing Business ranking,India ranked 77th out of 190 Countries after Jumping 53 Position ahead in just two years.
Fitch Ratings:
♦ CEO:Paul Taylor
♦ President:Ian Linnell
♦ Headquarter:New York, U.S.A. Key Points:
i. Dr. Saroj Suman Gulati is the Director of Blue Bells Group of Schools. She was awarded in recognition of her remarkable contribution to ‘K-12 education and promotion of Art and Culture’.
ii. The award was conferred by His Highness Nahyan Bin Mubarak Al Nahyan, member of the Cabinet and Minister of State for Tolerance, United Arab Emirates. Mr. Ashish Gulati, Vice-chairman, Blue Bells Group of Schools, received the award on her behalf.
iii. She was among the 9 Indian educationists who were awarded the Global Education Leaders Award. Other award winners are: 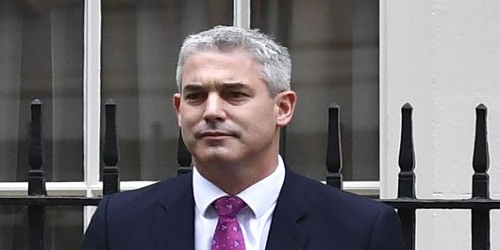 Ex-IndiGo President Aditya Ghosh joins OYO as CEO for India, South Asia
On 15th November 2018, budget hospitality chain OYO Hotels appointed Aditya Ghosh as Chief Executive Officer (CEO) for its India and South Asia operations with effect from December 1, 2018.
Key Points:
i. Aditya Ghosh was President of IndiGo Airlines for 10 years. He was also wholetime director of IndiGo Airlines. He resigned from IndiGo in July 2018.
ii. He was an advisor to Tata Trusts. He is a lawyer by profession.
iii. At present, South Asia region for OYO Hotels only includes India and Nepal.
About OYO Hotels:
♦ Founded – 2013
♦ Founder and Group CEO – Ritesh Agarwal

OP Bhatt resigned from External Expert of Search & Selection Committee of Yes Bank
On November 17, 2018, former SBI chairman O P Bhatt resigned from the External Expert on the Search and Selection Committee (S&SC) panel due to potential conflict of interest.
i. He presented his resignation to the Nomination & Remuneration Committee (‘NRC’) of Yes Bank which accepted his resignation with immediate effect.
ii. He is under CBI’s scanner in connection with loans given to the now defunct Kingfisher Airlines, promoted by fugitive liquor baron Vijay Mallya. 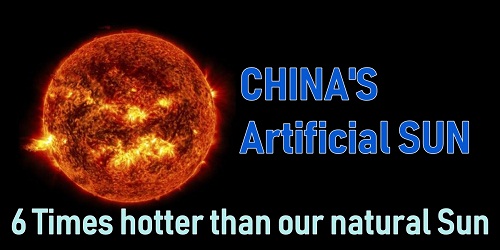 Key Points:
i. On 13th November 2018, scientists from China’s Institute of Plasma Physics announced that plasma in their Experimental Advanced Superconducting Tokamak (EAST) also called the “artificial sun”, reached 100 million °C, the temperature required to perform nuclear fusion on Earth.
ii. The EAST reactor has been designed to replicate processes happening at the Sun to turn hydrogen into cost-effective green energy.
iii. EAST is 11 metres tall. It has a diameter of 8 metres. It weighs nearly 360 tonnes.
iv. The record temperature was achieved through various new techniques in heating and controlling the plasma. But they were able to maintain the state for only about 10 seconds.
About China:
♦ Capital – Beijing
♦ Currency – Renminbi
♦ Official language – Standard Chinese
♦ President – Xi Jinping 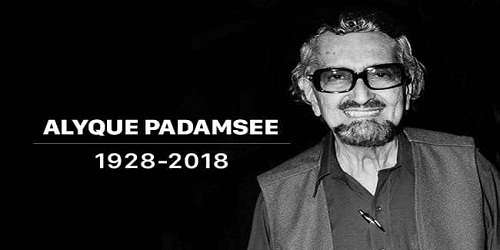 Key Points:
i. Alyque Padamsee was 90 years old. In 2000, he was awarded the Padmashri. He was also named Advertising Man of the Century by The Advertising Club in Mumbai.
ii. He was the former Chief Executive of advertising firm Lintas in India and former regional coordinator for Lintas in South Asia.
iii. He had developed several iconic and memorable Indian ad campaigns. He was also known for his role as Muhammad Ali Jinnah in Oscar-winning film “Gandhi” (1982).

‘Toxic’ declared Oxford Word of the Year 2018
On November 15, 2018, Oxford Dictionary announced ‘Toxic’ as the Word of the year 2018.
i. The sheer scope of its application that has made it the standout choice as there has been a 45% increase in the number of times people have looked up the word on its website.
ii. The word of the year is chosen from a shortlist “drawn from evidence gathered by (its) extensive language research programmer from 150 millio nwords of current English from web-based publications each month.
iii. In 2017, the word was “youthquake” and in 2016 it was “post-truth”. 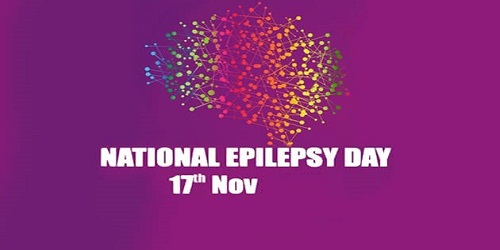 i. According to World Health Organization (WHO), about 50 million people have epilepsy across the world, out of which 80 percent people are living in developing countries.
ii. Globally, the World Epilepsy Day or better known as Purple Day is observed on March 26th annually.