We are here for you to provide the important Current Affairs January 21 2019, which have unique updates of all daily events from all newspapers such as The Hindu, The Economic Times, PIB, Times of India, PTI, Indian Express, Business Standard and all Government official websites. 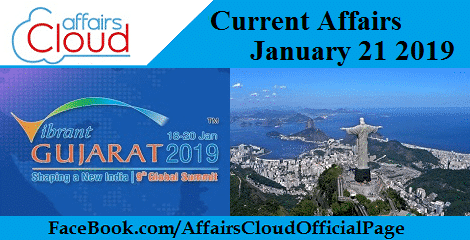 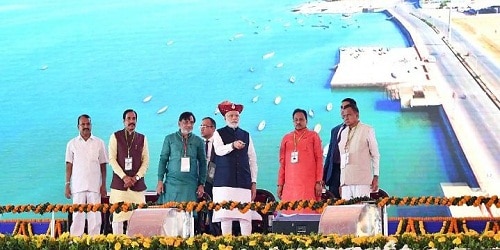 Centre to states: step up spending, auditing of District Mineral Fund
On 18th January 2019, Centre has advised States to increase the spending under District Mining Fund (DMF) because only 24 percent of the Rs. 23,606 crore allocated for Pradhan Mantri Khanij Kshetra Kalyan Yojana (PMKKKY) is spent until now.
Key Points
i. PMKKKY is announced to provide welfare to those affected by mining operations.
ii. Under PMKKKY scheme, Government has to spend a portion of revenue for the development activities in the mining regions.
iii. Ministry of Mines directed to states to ensure that the rate of expenditure for development works improves while ensuring timely audit of the spending.
About Ministry of Mines
♦ Minister of Mines: Narendra Singh Tomar
♦ Headquarters: New Delhi

Housing, Urban Affairs Ministry to organize ‘Shehri Samridhi Utsav’ from Feb 1 to 15
On 18th January 2019, Housing and Urban Affairs Minister, Hardeep Singh Puri announced that Ministry of Housing and Urban Affairs will organize a fortnight of events named Shehri Samridhi Utsav from 1st February to 15th February 2019.
i. The Shehr Samridhi Utsav focusing on urban livelihoods will be celebrated all over the country with active participation from states and cities.
ii. The event is aimed at extending the outreach of Deendayal Antyodaya Yojana –National Urban Livelihoods Mission (DAY – NULM)

Governments to induct 20%women in military police
On January 19,2019,government decided to induct 20% women in military police.
i. This decision is taken with motive to represent women in the armed force ,they will be appointed for the first time in Personnel Below Officer Rank, PBOR.
ii. Their job criteria would be investigating offences like rape cases,policing cantonment and extending support to the civil police whenever needed.

Tamil Nadu Released startup and innovative policy 2018-2023
On January 18, 2019,Tamil Nadu government released ‘Startup & Innovation policy 2018-2023’ with a mission to provide an innovative ecosystem for startups registered in the State and to make Tamil Nadu a ‘Global Innovation hub for startups’ by 2023
Key Points to be Noted
i. The government formed a 5-point plan to implement the policies which include creating ecosystems, ensure resources availability for Startup ecosystem, enable skill development and job creation, support social entrepreneurship and establish global accessibility and partnerships.
ii. The State is to set up Tamil Nadu Startup Fund of Funds for Rs.250 crore which is to be registered as an Alternative Investment Fund (AIF) managed by Small Industries Development Bank of India (SIDBI), for investment in startups and MSMEs. The government will invest Rs.75 crore in the fund with the first tranche of Rs. 25 crore be allotted in FY 2019-2020.
iii. The government also created Tamil Nadu Startup Seed Grant Fund (TNSSGF) of Rs.50 crore with a estimate amount of Rs.5 crore in the first year in partnership with financial institutions for supporting early stage financing requirements of the startups .
About Tamil Nadu:
♦ Capital:Chennai
♦ Chief Minister:Edappadi K Palaniswami.
♦ Governor:Banwarilal Purohit
♦ No.of districts:33

Centre to make Euro 6 mandatory for initial launch from April 1, 2020: Nitin Gadkari
On 18th January 2019 Government has taken decision to make Euro 6 Emission standards necessary for the initial launch of vehicles from 1 April 2020. Union Minister for Transport Nitin Gadkari made the announcement while addressing Symposium of International Automotive Technology 2019 in Pune. 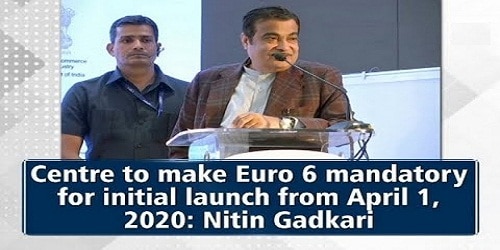 Key points
i. The aim of Euro 6 is to reduce the level of exhaust emissions in petrol and diesel cars including Carbon Monoxide (CO) , Nitrogen Oxide (NOx),  Hydrocarbons (THC and NMHC ) and Particulate matter (PM).
ii. Transport Ministry will provide a center of excellence for Methanol at ARAI (Automotive Research Association of India).
iii. Euro 6 is the sixth series of the European Union directive to reduce harmful pollutants from vehicle exhausts.
About ARAI
♦ Automotive Research Association of India
♦ Headquarter- Pune
♦ Director- Mrs.Rashmi Urdhwareshe
♦ Founded in 1966
About Ministry of Road Transport and Highway
♦ Minister- Nitin Gadkari
♦ Secretary- Yudhvir Singh Malik.

Outbreak Readiness and Business impact released by WEF
The World Economic Forum released “The Outbreak Readiness and Business impact white paper” in collaboration with the Harvard Global Health Institute.
Key Points
i. The report says that the business risk posed by a new era of epidemic cannot be considered exclusively and all the companies operating globally should take proper actions to mitigate threats posed by epidemics.
ii. Since 2011, World has witnessed 200 epidemic events per year and the number and kind of infectious disease outbreaks have increased significantly in last 30 years.
iii. The Report also warns that the threat due to epidemic is similar to that estimated for climate change in the coming decades. As per report, the Pandemics will cause annual economic losses of 0.7 per cent of global GDP.
The World Economic Forum
♦ Headquarters: Cologny, Switzerland
♦ Executive Chairman: Klaus Schwab 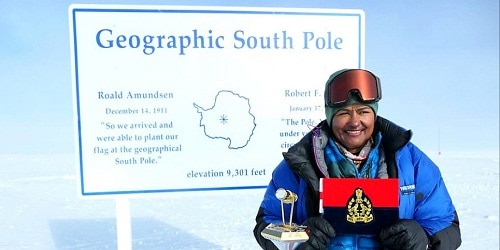 Aparna already became the first officer of the All India Services to have successfully climb Antarctica’s highest peak Mount Vinson Massif in 2016 and then climbed Mount Manaslu in the west-central part of Nepal in 2017.

Aqeel Ahmed: new chairman of council of Leather Exports
On January 18,2019,the  Council for Leather Exports (CLE) has appointed Aqeel Ahmed as its new chairperson.
i. The council also announced Sanjay Leekha as its new vice chairman.
ii. In global leather export,India is to have a growth of 5-6% by march 2019.India’s share in global leather exports and imports is about 3 per cent.
iii.The council is a trade promotion organisation of leather and leather products industry.It works under the aegis of Ministry of Commerce and Industry.

Softbank to acquire 40% stake in FirstCry for $400 mn: Report
The Tokyo Headquartered investment giant, SoftBank has decided to invest $400 million for over 40 per cent stake in BrainBees Solutions, which owns and operates omni-channel baby and mother care product retailer FirstCry. 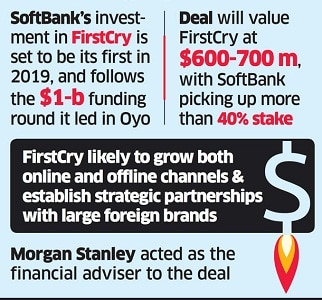 Key Points
i. SoftBank is valuing 8 years old Pune based venture, FirstCry at $600-700 million and planning to pick over 40 per cent stake whereas FirstCry Founder, Supam Maheshwari and Amitava Saha will retain 12-14 per cent stake.
ii. As per SoftBank officials the money will come in tranches linked to financial and business performance milestones.
iii. Morgan Stanley acted as the Financial advisor for this big deal.

Amazon-Witzig bid to acquire Aditya Birla’s retail store
On January 18, 2019,Competition commission of India approved Amazon and Witzig Advisory services deal to acquire Aditya Birla.
Key points to be Noted
i. According to CCI’s approval,Amazon acquired 49% of the shares and Witzig got 51% of shares in Aditya Birla.
ii. This is also seen as the US-based e-commerce major Amazon’s second investment in the Indian market after it had picked up stake in the K Raheja group’s retail arm Shopper Stop
iii. Witzig ,a wholly owned subsidiary of Samara Alternative Investment Fund is registered with the Securities and Exchange Board of India (Sebi) as category II Alternative fund. CCI gave approval to the acquisition of 99.99 per cent of the equity share capital of Aditya Birla Retail limited (ABRL) to Witzig Advisory Services Private Limited
About CCI
♦ Headquarter:New Delhi

Saurashtra record highest successful chase in Ranji Trophy history
Saurashtra has created history by successfully chasing a target of 372 runs in the second quarter final against Uttar Pradesh in the ongoing Ranji Trophy 2018-19 at Bharat Ratna Shri Atal Bihari Vajpayee International Cricket Stadium in Lucknow, Uttar Pradesh.
i. Saurashtra broke the record of Assam which had chased 371 runs against services in 2008-09 in Delhi.
ii. Saurashtra qualified for the semi-final with this win with a great knock from Rinku Singh who scored 150 runs.

Eminent neurologist Jagjit Singh Chopra died
On January 19, 2019,Padma Bhushan neurologist Jagjit Singh Chopra has died at the age of 84.
i. He was the founder of the department of neurology at PGIMER, Chandigarh.
ii. He was the first Indian neurologist to hold chair as the secretary general of XIV World Congress of Neurology, held at New Delhi in 1989.
iii. He received lifetime achievement award by the World Federation of Neurology in 2017.

i. Masazo Nonaka was born on 25 July 1905 and have lived with his four generation family.
ii. Japan has one of the world’s highest life expectancies. The Longest living man on record Jiroemon Kimura who died after his 116th birthday in June 2013 was also from Japan.