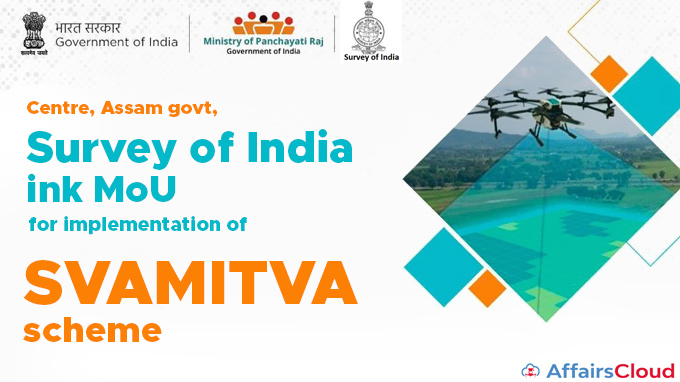 Assam Government & Survey of India (SoI), the National Mapping Agency (NMA) of India have signed an Memorandum of Understanding (MoU) for implementation of SVAMITVA scheme (Survey of Villages and Mapping with Improvised Technology in Village Areas) in Assam.

SVAMITVA scheme
i.It is a Central sector scheme launched on April 24, 2020 (i.e during the National Panchayati Raj Day)  by Prime Minister Narendra Modi. It aims to provide rural people with the right to document their residential properties, so that they can use their property for economic purposes.
ii.Target –  To cover around 6.62 Lakh villages of India during the period 2021-25.
iii.Implementing agency – Ministry of Panchayati Raj (MoPR), Technology – Survey of India.
About Survey of India (SoI)
It  is the National Survey and Mapping Organization which comes under Department of Science & Technology
Surveyor General of India – Naveen Tomar
Headquarter – Dehradun, Uttarakhand
Established – 1767 (It is the Oldest Scientific Department of Govt. of India)
>>Read Full News 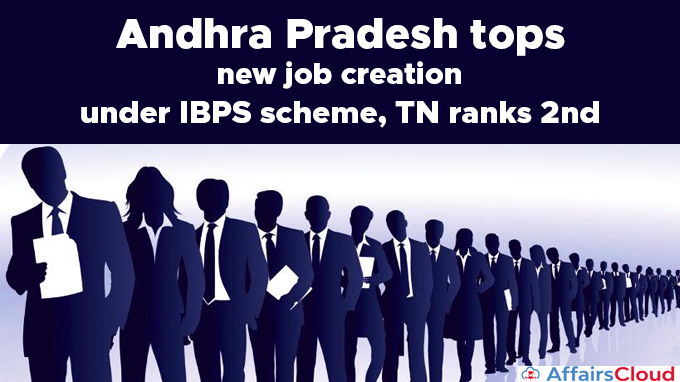 Andhra Pradesh has generated the highest employment in India under the IBPS Scheme (India Business Process Outsourcing Promotion Scheme) by creating 12, 234 new jobs. Tamil Nadu came 2nd by creating 9, 401 jobs, while the remaining jobs were spread across Punjab, Odisha, Maharashtra and others. 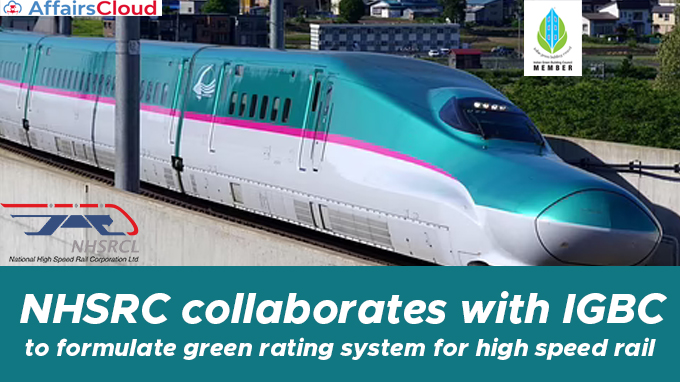 Aim: To eliminate the rumours and apprehensions related to the ongoing vaccination drive.

COVID-19 Vaccines of India:
At present India has 2 homegrown vaccines for the coronavirus: Covishield and Covaxin.

The government of India has set a target to increase the number of Pradhan Mantri Bhartiya Janaushadhi Kendras(PMBJKs) to 10000 by March 2024. Mansukh Mandaviya, Minister of State for Chemicals & Fertilizers virtually inaugurated the PMBJK in Pragpur at Kangra, Himachal Pradesh.
Note:
As of 11th June 2021, the number of PMBJKs is 7836 and the state of Himachal Pradesh has around 66 Janaushadhi Kendras.
About PMBJK:
The PMBJK aims to support the public to get access to quality generic medicine at affordable prices.
All the districts across India are covered under the PMBJK.
PMBJK Background:
i.Pharma Advisory Forum meeting held on 23rd April 2008 decided to launch the PMBJP KENDRA Campaign starting with the sale of generic medicines through dedicated sales outlets called PMBJK in various districts of the country.
ii.The Bureau of Pharma PSUs of India (BPPI), established in December 2008, is the implementation agency for the Pradhan Mantri Bhartiya Janaushadhi Kendras(PMBJKs).

World not on track to reduce Suicide Mortality Rate by 2030: WHO Report According to the report ‘Suicide Worldwide in 2019’  released by World Health Organization (WHO) – The world is not on track to reduce Suicide Mortality Rate by One-Third by 2030.
i.Some key statistics from the report, 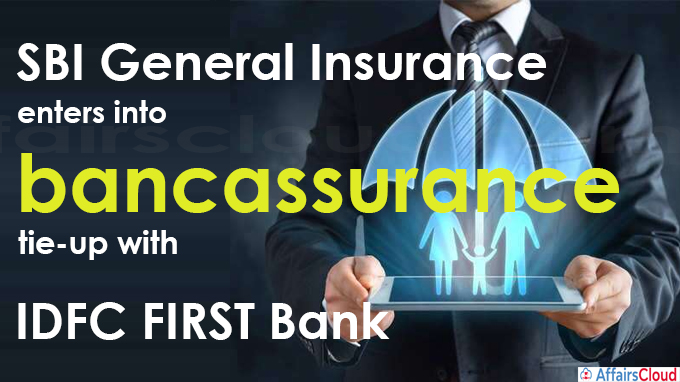 On June 21, 2021, SBI (State Bank of India) General Insurance inked a bancassurance partnership with IDFC (Infrastructure Development Finance Company) FIRST Bank for selling its non-life insurance products.  In this regard, a corporate agency agreement was signed between both the entities.

ICICI Bank has extended the instant ‘Cardless EMI’ facility for its pre-approved customers to make online purchases across 2,500 e-commerce platforms without using their card. Flexiloans.Com Ties Up With Retailio to Offer Working Capital Loans

Fintech platform FlexiLoans.com has partnered with Retailio, a business-to-business healthcare marketplace, to provide working capital loans to more than 1,00,000 retailers and distributors across the country.
Aim:
To fund over 15,000 pharma retailers in the next 18 months.
Key Points:
i.Access to a wide range of lenders and seamless digital on-boarding will be provided to the retailers on Retailio through FlexiLoans’s Co-lending platform – BiFrost.
ii.Funding for working capital will be done digitally within 24- 48 hours of applying for a loan.
iii.Enable the pharmacies to cater to the increased demand for healthcare products and stock holding period
About FlexiLoans:
FlexiLoans is an online lending platform which provides Quick, Flexible and Adequate funds to SMEs.
Establishment:2016
Headquarters: Mumbai, Maharashtra
Founders: Deepak Jain,Abhishek Kothari, Manish Lunia and Ritesh Jain.
About Retailio:
Head of Fintech: Rohit Anand
Corporate Office:Pune, Maharashtra

Bharti Airtel & Tata Group have announced a strategic partnership for implementing ‘Made in India’ 5G network solutions for India.  The 5G Technology will be based on ‘O-RAN (Open Radio Access Network)’ based Radio and NSA/SA (Non-Standalone/standalone) Core Technology. National Thermal Power Corporation(NTPC) Ltd. a Maharatna CPSU (central public sector undertaking) under the Ministry of Power has been recognised as a ‘Great Place to Work’ for the 15th year in a row by the Great Place to Work (GPTW) Institute. It was the only PSU to feature consistently among India’s Top 50 Best Workplaces. Key Points:
i.Upasana Kamineni a renowned businesswoman, Vice-Chairperson of CSR (Corporate Social Responsibility) of Apollo Hospitals, and the founder of URLife.
ii.As an ambassador, she will support the forest field staff by focusing on several Indian states mostly eco-regions.
iii.The conservation of natural areas like forest and wetlands and even increase in wildlife numbers are results of the efforts of  forest department staff who have tirelessly been protecting and managing these areas.
About forest field staff:
A forest field staff work 24/7 in extreme conditions and on an average, they walk up to 15-20 km a day to patrol the forests, facing the dangers of encountering wild animals or poachers. They have hardly any access to emergency medical facilities in the line of duty.
About WWF India:
Establishment– 1969 as World Wildlife Fund India
President– Arvind Wable
Headquarter– New Delhi In June 2021, Civil Contract – a political party led by Nikol Pashinyan, the serving Prime Minister of Armenia won the country’s Parliamentary election with 53.97% of the votes polled. While the opposition Armenia Alliance led by former Armenian President Robert Kocharyan trailed on 21.06% votes.
i.The 46-year-old Nikol Pashinyan is serving as the Prime Minister of Armenia since 2018. He was facing various political criticisms for ceding territories to Azerbaijan.
ii.This election comes after the “Six Week War” between Armenia & Azerbaijan that took place in the Nagorno-Karabakh region in November-December 2020.
iii.At the backdrop of the bloody war, Armenia backed by Russia signed a Peace agreement with Azerbaijan. As per the agreement, Territories lost by Azerbaijan in the 1990 war were reinstituted.
About Armenia:
Capital – Yerevan
Currency – Armenian dram
President – Armen Sargsyan 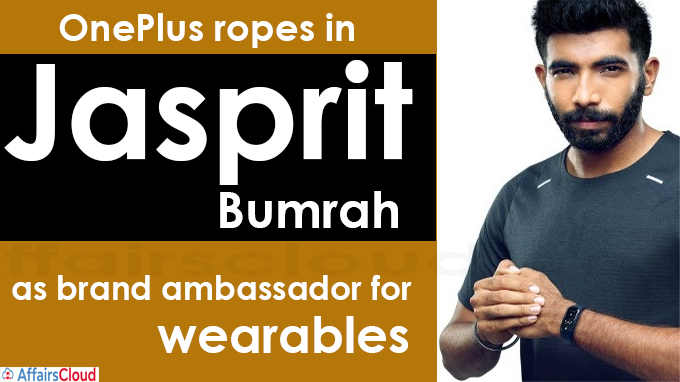 Indian Cricketer Jasprit Bumrah has been appointed as the Brand Ambassador of OnePlus wearables which includes the OnePlus Watch and OnePlus Band. 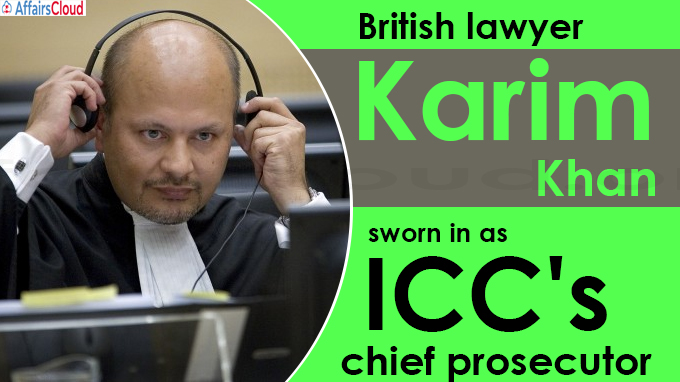 British human rights lawyer Karim Khan has been elected as the new chief prosecutor of the International Criminal Court(ICC) by its member countries.He is elected for a period of 9-years from June,2021.

About Karim Khan:
i.Karim Khan has previously served as a prosecutor, investigator and defense attorney in international courts.
ii.He is very much known for the UN investigations made into the crimes by the Islamic State.
iii.He has defended many famous persons including former Liberian President Charles Taylor and Kenya’s Deputy President William Ruto at international courts
About International Criminal Court(ICC):
The ICC is the first and only permanent international court with jurisdiction to prosecute individuals for the international crimes of genocide, crimes against humanity, war crimes and the crime of aggression.
President: Judge Piotr Hofmański (Poland)
Founded: 1 July 2002
Headquarters: Hague,Netherlands
Members states:123

Cellular Operators Association of India(COAI) has re-elected  Ajai Puri, Chief Operating Officer of Bharti Airtel as Chairman of the industry association for 2021-22 and Pramod Kumar Mittal, President of Reliance Jio Infocomm, will be the Vice Chairman of the association. 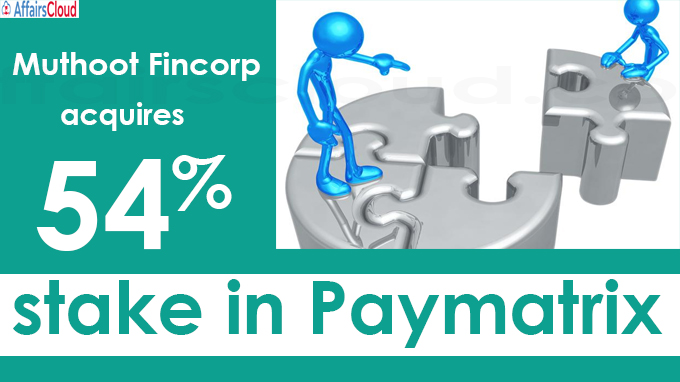 Financial Service provider Muthoot Fincorp, flagship company of Muthoot Pappachan Group, has  raised a majority 54% stake in Hyderabad (Telangana)-based fintech startup Paymatrix by buying out existing investors.  It was acquired through a combination of primary and secondary investments.

About Paymatrix:
Launched in 2016 to streamline online payment of property rentals, rent deposits and maintenance payments using credit cards was incubated at IIIT (International Institute of Information Technology)-Hyderabad along with Paypal accelerator programme. Since then, it has become one of the largest property rent payment and collection platforms in India with a user base of over 82,000 and having processed Rs 200 crore till date.
About Muthoot Fincorp:
It is a Non-Banking Financial Company (NBFC)
Managing Director– Thomas John Muthoot
Tagline– Jab Zindagi Badlani Ho
Headquarter– Thiruvananthapuram, Kerala

The Competition Commission of India (CCI) has approved the acquisition of an additional equity stake of about 16.40 percent shareholding of United Breweries Limited (UBL) by Heineken International BV (HIBV). 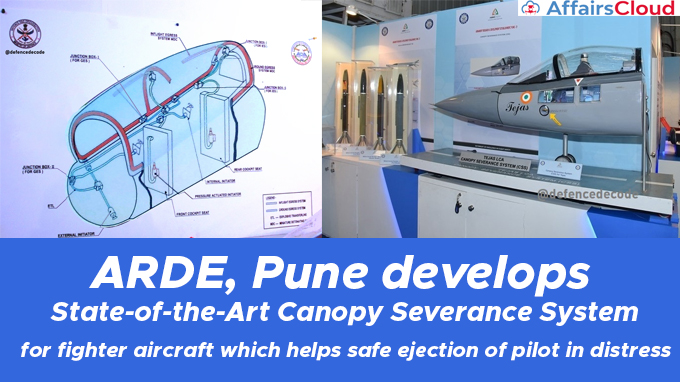 Dr Kothareddy Prasad, research scientist of Andhra Pradesh Biodiversity Board has discovered a new grass species named Lophopogon prasannae in the Nigidi forest of Anantapur district of Andhra Pradesh(AP). The new species has been named after Dr PV Prasanna, a well-known botanist, Scientist G of the Botanical Survey of India (BSI).

Former Indian women volleyball team captain Nirmal Kaur, who is the wife of sprint legend Milkha Singh, passed away due to Covid-19 complications at Mohali,Punjab. 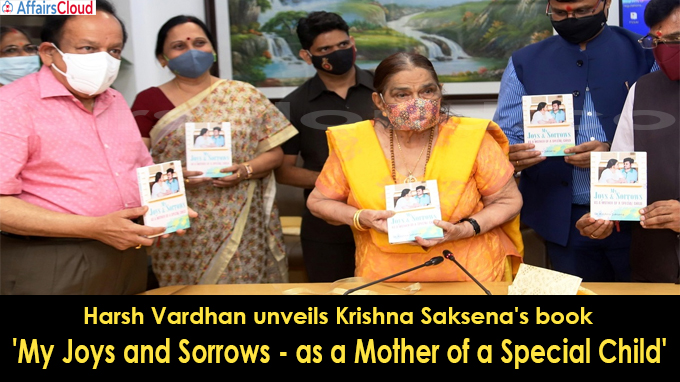 Union Minister for Health & Family Welfare Dr Harsh Vardhan launched a book titled “My Joys and Sorrows – as a Mother of a Special Child”, written by the author Dr Krishna Saksena.

About The Book:
i.This book is an autobiography written in a conversational and easy-going style.
ii.It is about the journey of Dr. Krishna Saksena and her disabled son Shiv.
iii.The book is full of beautiful photographs, including some black and white ones which have historical significance.
About the author:
i.Dr. Krishna Saksena was the first woman to get a Ph.D. degree(Doctor of Philosophy) from Lucknow University in 1955.
ii.She has written a number of books which include novels, stories & essays.
iii.Some of her notable works includes A Bouquet of flowers, The Tales of my wrinkle tells, Take a U turn, Whisper of Time , etc.,

American Actor Will Smith announced his first Memoir titled “Will” 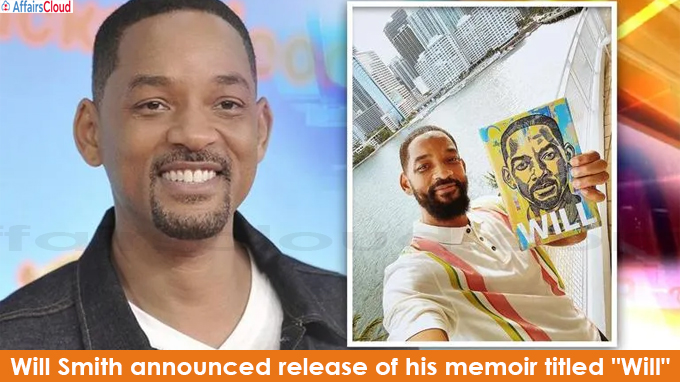 American Actor, rapper, and producer Will Smith, is set to publish his first memoir titled “Will” in November 2021. The book is co-written by Mark Manson, the author of The Subtle Art of Not Giving a F*ck. The book will be published by Penguin Press, an imprint of Penguin Random House.
About “Will”:
i.The cover art of the book was created by Brandan “BMike” Odums, a visual artist from New Orleans.
ii.The book features Will Smith’s journey from being raised in West Philadelphia to becoming a Hollywood star and rapper.
iii.The book features the story about the life and career of Will Smith.
iv.Will Smith will also narrate the audiobook of Will from Penguin Random House Audio.
About Will Smith:
i.Will Smith has won the grammy award for Best Rap Solo Performance in 1998 and 1999, Best Rap Performance by a Duo or Group in 1992, and Best Rap Performance in 1988.
ii.He has starred in various films like The Fresh Prince of Bel-Air, Bad Boys, Men in Black, and Pursuit of Happyness among others.

As a part of Indo-Israel Agricultural Project (IIAP), the Government of India (GoI) and the state Government of Karnataka jointly inaugurated three centres of excellence (CoEs) in Karnataka viz. COE Kolar for Mango, COE Bagalkote for Pomegranate and COE Dharwad for Vegetables.

Reason behind setting up of COEs:
It is being done to implement advanced Israeli Agro-Technology in the field of horticulture with a goal of doubling the farmer’s income through 29 operational CoEs across India in 12 States.