Govt Approves Continuation of ‘Scheme for Investment Promotion’ for 5 Years 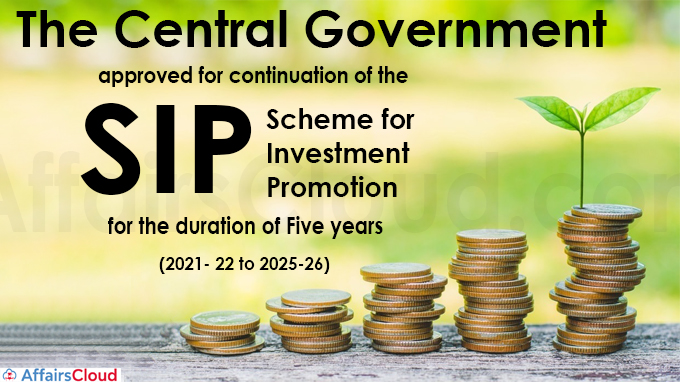 The Ministry of Commerce and Industry has approved the continuation of the Scheme for Investment Promotion (SIP) for five years from 2021-22 till 2025-26 with a financial outlay of Rs 970 crore. On November 30, 2021, the Ministry of Social Justice and Empowerment announced the formation of a 3-member committee to review the annual income criteria for Economically Weaker Section (EWS) reservations in job and central education institutes.
About the Committee
i.The 3 members of the Committee: 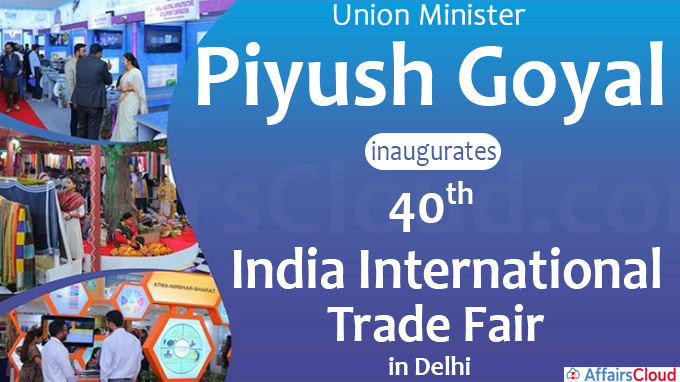 Global Trade Report of UNCTAD: Global Trade Expected to Rise by 23% to $28 trillion in 2021 As per the Global Trade update report (November 2021) of UNCTAD (United Nations Conference on Trade and Development), the Global trade is expected to increase by 23 percent to reach about US$ 28 trillion in 2021, when compared to 2020. 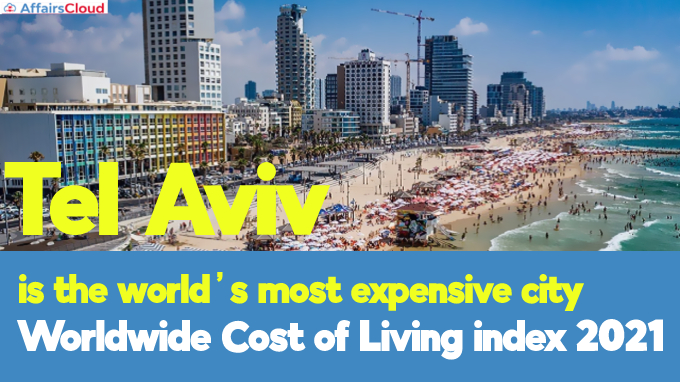 According to the Economist Intelligence Unit’s (EIU) Worldwide Cost of Living Index 2021, Tel Aviv, Israel has become the most expensive city in the world to live in 2021, pushing Paris, France and Singapore jointly to occupy the second spot with Zurich and Hong Kong at the fourth and fifth spots respectively. 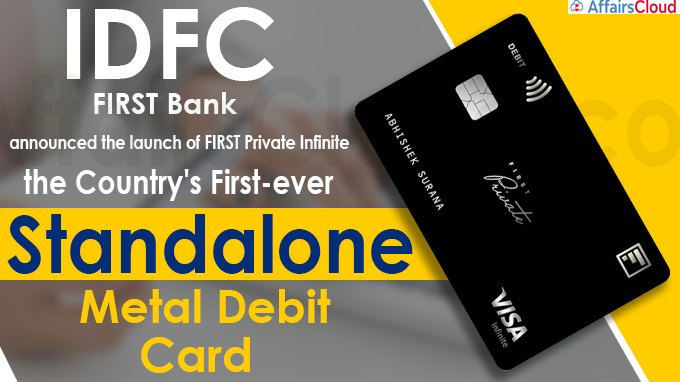 On November 30, 2021, IDFC FIRST Bank launched India’s first standalone metal debit card or black card namely ‘FIRST Private Infinite’ in partnership with Visa. It is crafted from hybrid metal with details printed in silver.
About ‘FIRST Private Infinite Card:
It is a lifetime free card to cater the customers of the bank’s FIRST Private program.The program offers an unrivalled banking and investment experience to customers and comes with a range of exceptional investment, banking, lifestyle and wellness benefits. On November 29, 2021, the Reserve Bank of India (RBI) superseded the Board of Directors of Reliance Capital Ltd (RCL), a Non-Banking Financial Company (NBFC) by appointing Nageswar Rao Y (Ex-Executive Director, Bank of Maharashtra) as the administrator of the company.
Now, to assist the administrator, RBI appointed a three-member advisory committee by exercising its powers conferred under section 45-IE (5) (a) of the RBI Act 1934. The committee will assist the administrator in discharge of his duties. The members of the advisory committee are as follows:
i.Sanjeev Nautiyal, ex-DMD, State Bank of India
ii.Srinivasan Varadarajan, ex-DMD (deputy managing director), Axis Bank
iii.Praveen P Kadle, ex-MD & CEO, Tata Capital Limited
The formulation of the committee is also on the lines of Insolvency and Bankruptcy (Insolvency and Liquidation Proceedings of Financial Service Providers and Application to Adjudicating Authority) Rules, 2019 which states the appointment of Advisory committee by the concerned financial sector regulator to advise the administrator during the corporate insolvency resolution process.
About Reserve Bank of India (RBI):
Establishment– April 1, 1935
Headquarters– Mumbai, Maharashtra
Governor– Shaktikanta Das
Deputy Governors– Mahesh Kumar Jain, Michael Debabrata Patra, M. Rajeshwar Rao, T. Rabi Sankar 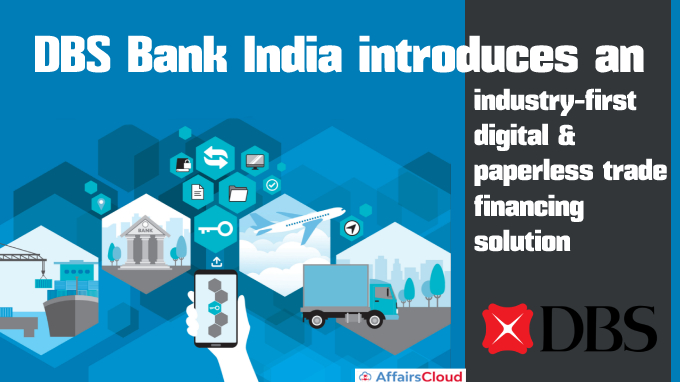 DBS Bank India has introduced a paperless proposition for the financing of domestic invoices by buyers and sellers and also the first paperless domestic trade financing transaction with Lincon Polymers Pvt Ltd to reduce processing turn-around time and for efficient business.

Features:
i.Customers can share details of their transactions through IDEAL (DBS’ digital banking platform that enables companies to initiate, monitor, and secure business transactions).
ii.The customer’s data is validated against the Government-enabled E-Way bill portal through Goods and Services Network (GSTN) after receiving a one-time authentication from the customer.
iii.The bank has partnered with Rezofin, an online invoice financing platform for this process.
Other Launches by DBS Bank:
i.DBS bank has introduced a completely digital and innovative payments solution in partnership with Transport Corporation of India Limited (TCIL).

ii.The bank has also collaborated with ODeX to introduce ODeX Pay Later Solutions powered by DBS which is a hassle-free credit solution for freight movements. 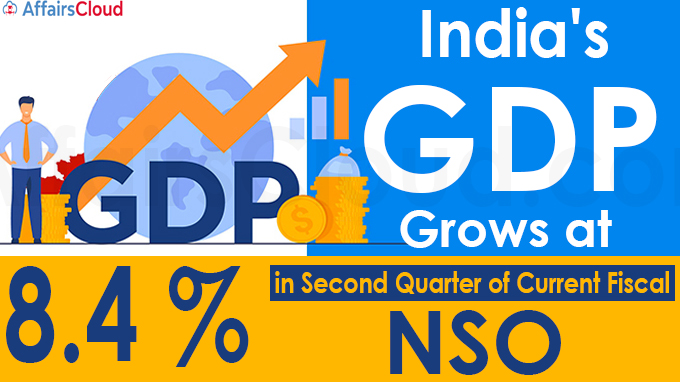 i.On November 30, 2021, the National Statistical Office (NSO), Ministry of Statistics and Programme Implementation (MoSPI) released the estimates of Gross Domestic Product (GDP) for the second quarter (July-September) of 2021-22 (Q2FY22), both at Constant (2011-12) and Current Prices.
ii.As per the estimates, India’s GDP in Q2FY22 grew by 8.4% as compared to 7.4% contraction (-7.4%) in Q2FY21.
iii.This is the 4th consecutive quarter of positive growth after a two-quarter contraction in 2020. It reflects a healthy recovery in private consumption expenditure due to the unlocking of the economy, and the significant progress on vaccination.
iv.Also, the Indian economy is expected to grow 6.5-7% in 2022.
About Ministry of Statistics and Programme Implementation (MoSPI):
Minister of State Independent Charge– Rao Inderjit Singh (Constituency – Gurugram, Haryana)
>>Read Full News Note- Previous winners of the prize are Milan Vaishnav (2018), Ornit Shani (2019), and Amit Ahuja and Jairam Ramesh (jointly, 2020).
i.The winning book  was selected on the basis of a jury’s  decision chaired by political scientist Niraja Gopal Jayal, Nandan Nilekani and Manish Sabharwal and historians Srinath Raghavan and Nayanjot Lahiri.
About Dadabhai Naoroji:
Dadabhai Naoroji Dordi was born on 4 September 1825,in Mumbai, Maharashtra and also known as ‘Grand Old Man of India’ and ‘Unofficial Ambassador of India’.
Political career:
i.He began his  political career as the Dewan of the Maharaja of Baroda in 1874.
ii.He also became a member of the Legislative Council of Mumbai during 1885 – 88.
iii.Notably, he was the first Asian to become a British MP (Member of Parliament)  when he was elected to the House of Commons in 1892.
iv.He was the three times  President of the INC in 1886, 1893 and 1906.
Various organisations founded:
i. London India Society in 1865 to put forth views on Indian political, social and literary subjects.
ii. East India Association in 1866 with the purpose of putting Indian viewpoints across to the British public.
iii.He was a founder-member of the INC  which he formed in 1885 along with Dinshaw Wacha and Allan Octavian Hume.
Books:
i.Poverty of India
ii.Poverty and un-British rule in India
iii.The Parsee Religion: From the Proceedings of the Liverpool Literary and Philosophical Society
iv.The European and Asiatic Races
v.The Wants and Means of India
About Kamaladevi Chattopadhyay NIF (New India Foundation) Book Prize:

Merriam-Webster Named ‘Vaccine’ as 2021 Word of the Year

Merriam-Webster, America’s most trusted online dictionary, has chosen ‘Vaccine’ as the 2021 word of the year. The word of the year is chosen by data that states the significant increase in lookup at Merriam-Webster.com in the past 12 months.
Lookups for the ‘Vaccine’ increased 601% year-over-year from 2020 and were up 1048% from 2019. 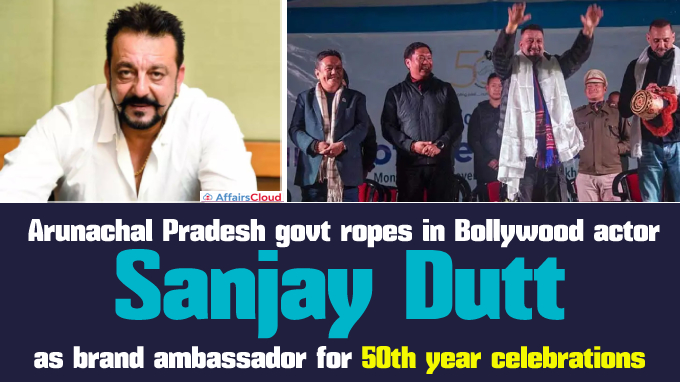 The Arunachal Pradesh (AP) Government has signed Bollywood actor Sanjay Dutt as brand ambassador and award-winning filmmaker and branding expert Rahul Mittra as brand advisor of the occasion of their golden jubilee celebrations, marking the 50th year of the naming of the state.

The Golden Jubilee celebrations 2022
i.The month-long celebrations will commence at Ziro from 20th January 2022 where AP got its name and Union Territory status in 1972.

ii.The closing ceremony will be held in Itanagar on the occasion of the 36th Statehood Day celebrations on 20th February 2022.
Key Highlights:
As part of the media campaign, Sanjay Dutt will feature in a series of promotional videos on, Tourism in the State, Initiatives on substance and drug abuse along with youths and also on Serious concerns for the state in recent years.
About Arunachal Pradesh
Governor – B D Mishra
Wildlife Sanctuaries – Mehao Wildlife Sanctuary, Yordi-Rabe Supse
Airports – Along Airport, Daporijo Airport 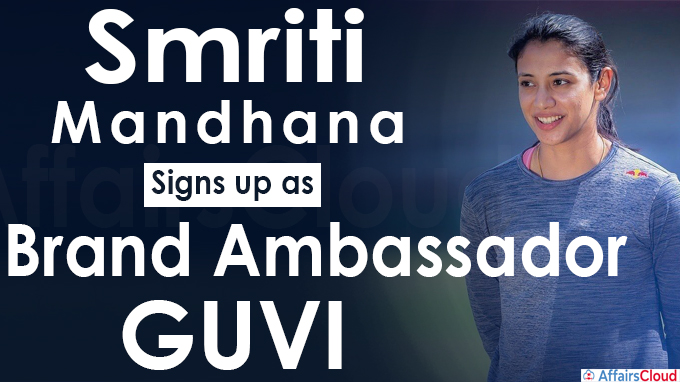 Key Points:
i.She will create awareness about technological education among everyone, especially among women.
ii.GUVI will be launching a cross-platform campaign with Smriti Mandhana, under which GUVI will offer the most affordable learning solutions for the youth, early professionals to develop their career profile in the IT industry.
Note:
GUVI is India’s first vernacular Ed-tech Startup to impart tech & programming skills to individuals in their preferred native languages (Tamil, Telugu, Hindi & Many other Indian Languages).
About Smriti Mandhana:
i.Smriti Shriniwas Mandhana hails from Mumbai, Maharashtra.
ii.She made her debut in ODI and T20I in 2013.
Awards:

Records:
i.She became the first-ever batter to score 10 consecutive 50-plus scores in One Day Internationals(ODI) while chasing.
ii.She has also become the 1st Indian player to score a century in the Women’s Big Bash League(WBBL), an Australian professional franchise Twenty20 cricket league.
Note: Smriti Mandhana was one of the first two Indians (along with Harmanpreet Kaur) to be signed up for the WBBL. Symbol: The red ribbon is the universal symbol of awareness and support for people living with HIV.
Theme 2021:
The United Nations(UN), United Nations Programme on HIV/AIDS (UNAIDS), & World Health Organization(WHO) observes World AIDS Day 2021 under the theme “End inequalities. End AIDS” with a focus on reaching people left behind. 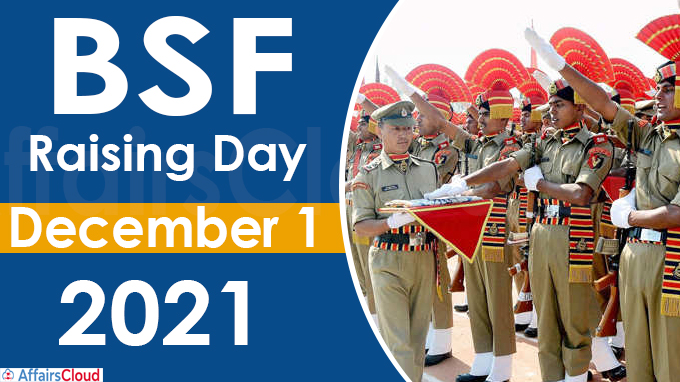 The Border Security Force(BSF) of India annually celebrates the BSF raising day on 1st December to mark the day on which the BSF, India’s First Line of Defence, came into existence in 1965.

History:
i.Till 1965, the international borders between India and Pakistan were manned by Various State Armed Police Battalion.
ii.Pakistan attacked the Sardar Post, Chhar Bet and Beria Bet in Kutch in 1965, exposing the inadequacy of the State Armed Police to counter the armed aggression.
iii.Following this attack, the Government of India established a specialized centrally controlled force which is armed and trained to secure the International Border with Pakistan.
iv.On the recommendations of the Committee of Secretaries, The Border Security Force came into existence on 1st December 1965 with K F Rustamji as the first chief and founding father.
About BSF:
The BSF, the world’s largest border guarding force, is under the administrative control of the Ministry of Home Affairs (MHA).
Border Security Force Act, 1968:
Border Security Force Act, 1968, provides the constitution and regulation of an Armed Force of the Union for ensuring the security of the borders of India and for matters connected therewith.
Note: In October 2021, the BSF Act 1968 was amended to authorise the force to undertake search, seizure and arrest within a larger 50 km stretch, instead of the existing 15 km, from the international border in Punjab, West Bengal and Assam.
About Border Security Force(BSF):
Director-General- Pankaj Kumar Singh
Headquarters– New Delhi, Delhi Dassault Systemes signed a Memorandum of Understanding (MoU) with Tamil Nadu Industrial Development Corporation (TIDCO) to set up The Tamil Nadu Center of Advance Manufacturing (TANCAM) at the TIDEL Park, Chennai, Tamil Nadu.
Signatories:  Chief Minister (CM) of Tamil Nadu, MK Stalin and  Managing Director, India,Dassault Systemes,Deepak NG.
What is in the MoU?
i.A first of its kind Center of Excellence (CoE) in India, TANCAM will work as  a Center of Excellence (CoE) in India and will provide a dedicated IT (Information Technology) engineering ecosystem to support the MSME (Micro, Small & Medium Enterprises) sector and students across Tamil Nadu. Sanjeev Kaushal, IAS officer of 1986 batch Haryana Cadre, has been appointed as the New Chief Secretary(CS) of Haryana following the superannuation of Vijai Vardhan, a 1985 batch IAS officer. He will be the 35th CS of Haryana since it became a separate state in 1966. He is due to retire in July 2024.

Walmart and its subsidiary Flipkart has signed a Memorandum of Understanding (MoU) with the Department of Micro, Small and Medium Enterprises(MSME), Government of Madhya Pradesh(MP) to create an ecosystem of capacity building for MSMEs in MP.
Under this MoU, Walmart, Flipkart and MSME Department will assist MSMEs to digitize their business and enable them to sell their products through online retail.