We are here for you to provide the important Recent and Latest Current Affairs 16 February 2021, which have unique updates of Latest Current Affairs 2021 events from all newspapers such as The Hindu, The Economic Times, PIB, Times of India, PTI, Indian Express, Business Standard and all Government official websites. i.The upcoming 210 kilometres long Delhi-Dehradun Expressway (Delhi-Saharanpur-Dehradun Economic corridor) is all set to become India’s first highway with 12 km long elevated corridor for the protection of wildlife as it will pass through pristine forest areas. It will also be Asia’s largest wildlife corridor.
ii.The project will be executed under the Engineering, Procurement, and Construction (EPC) mode by the Ministry of Road Transport and Highways (MoRTH).
iii.Notably, this expressway will reduce the distance between the two cities from 235 km to 210 km, and travel time from the current 6.5 hours to just 2.5 hours i.e reduction of 4 hours.
About Ministry of Road Transport and Highways (MoRTH)
Nitin Gadkari Constituency– Nagpur (Maharashtra)
Minister of State (MoS)– Gen. (Dr) Vijay Kumar Singh
<<Read Full News>> 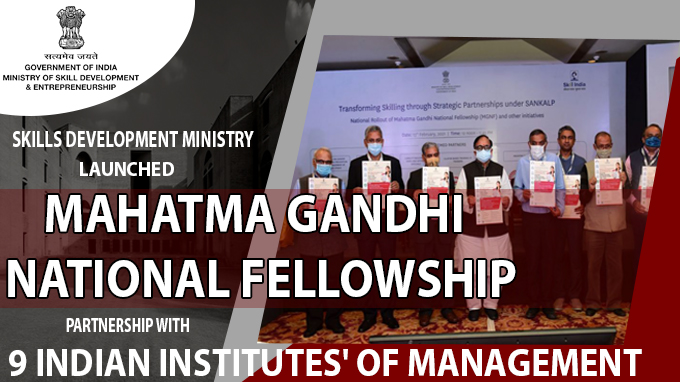 IETO Signs MoU with Govt of Karnataka for SDGs 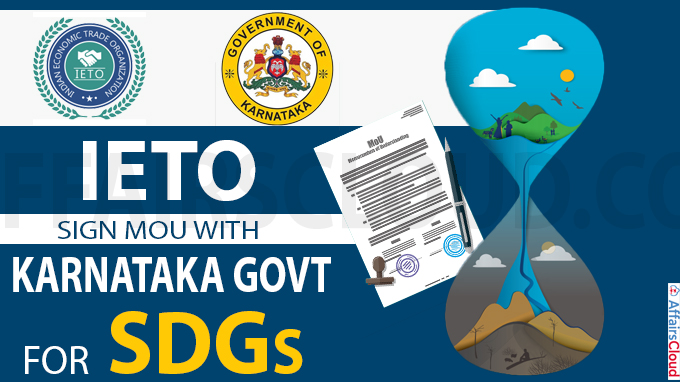 NeGPA: The Mission of Digital Agriculture 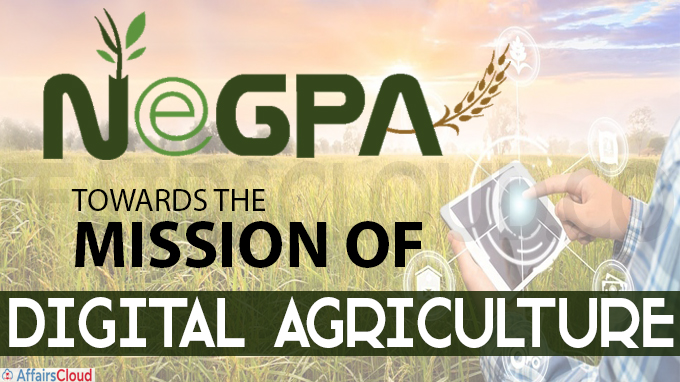 i.National e-Governance Plan in Agriculture (NeGPA) is a Centrally Sponsored Scheme initiated in 2010-11 as a pilot project in 7 India states viz. Assam, Himachal Pradesh, Jharkhand, Kerala, Karnataka, Maharashtra & Madhya Pradesh. It was then extended for all the remaining States and 2 UTs in 2014-15 for a period of 5 years. Now, this 5 year period was extended up to March 31, 2021.
ii.The aim of the scheme is to provide timely access to agriculture related information to the farmers through Information & Communication Technology (ICT).
About Ministry of Agriculture & Farmers’ Welfare:
Union Minister– Narendra Singh Tomar(Constituency- Morena, Madhya Pradesh)
Minister of State (MoS) – Parshottambhai Rupala, Kailash Choudhary
<<Read Full News>> 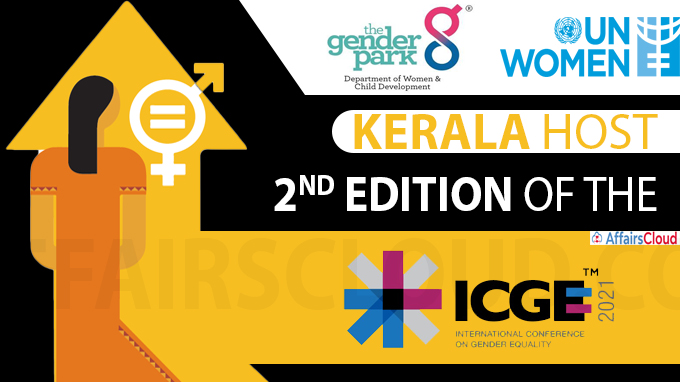 Prime Minister Narendra Modi inaugurated and laid the foundation stone for various projects in Kochi, Kerala. They are 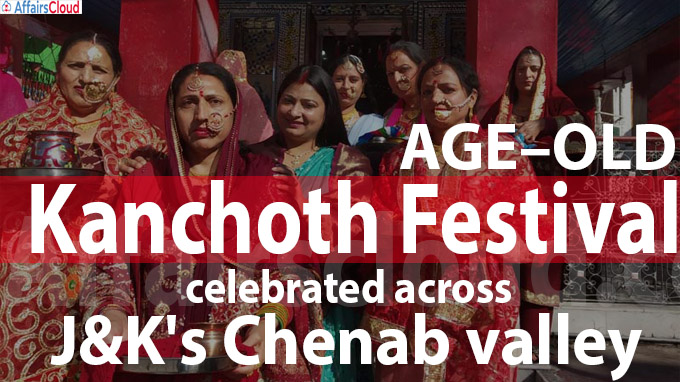 The 3 day Kanchoth festival, a symbol of ancient Nag culture is observed annually across Chenab valley region of Jammu and Kashmir during the ‘Shukla Paksha of Magh month’ in January or February. It is mainly celebrated by Nag followers. Kanchoth festival 2021 begins from February 14, 2021.
Reason for the Celebration: It is believed that on Gouri Tritiya( February 14 ), Lord Shiva and Goddess Parvati got married.
Note:  Kanchoth festival is like ‘Karva Chouth’ that is being celebrated in other parts of the country. The festival falls on the fourth day after the full moon, in the Hindu lunisolar calendar month of Kartik.
Recent Festivals Celebrated in other States:
i.Bihar’s 1st Migratory Birds Festival held in Bhagalpur, Bihar
ii.Odisha celebrates Raja Parba – Festival of Menstruation and Womanhood Dr Jitendra Singh, Minister of State for Ministry of Personnel, Public Grievances & Pensions stated that the upper Ceiling for 2 Family Pensions has been increased to INR 1, 25, 000 per month from INR 45, 000 per month. 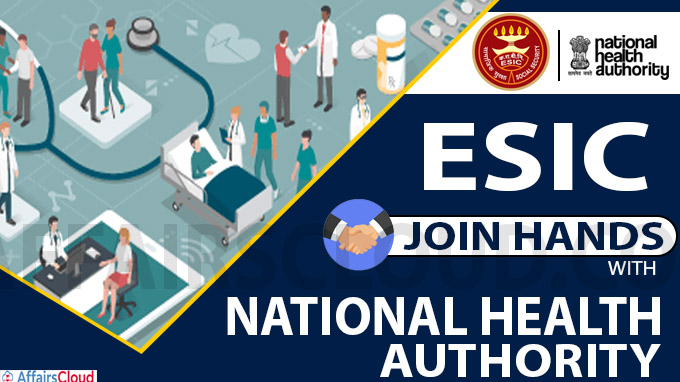 On 13th February 2021, Narendra Singh Tomar, Union Minister of Agriculture and Farmers’ Welfare virtually addressed the International conference “Global virtual Ceremony” in Rome on World Pulses Day.
He stated that India has contributed to around 24% of the global pulses production. The pulses production of India has increased to 240 lakh tonne which was around 140 lakh tonne in the past 6 years.
Highlights:
i.He also stated that India has been working toward increasing the production of pulses to reduce the gap between the demand and supply chain.
ii.India is the largest producer of pulses in the world, and India has become almost self-sufficient in pulses production.
iii.During April to December 2020, India recorded an increase in the export of agricultural goods including pulses with 26% increase in pulses production.
Initiatives of Indian government:
i.The government is promoting farming with high priority. Therefore, the agricultural budget of the country has been increased by more than 5 times, which is now about Rs 1.25 lakh crore.
ii.The government of India has been promoting Farmer Producer Organizations (FPO’s) to provide assistance to the small and marginal farmers (86%) of India.
iii.In 5 years the Government of India is set to build 10,000 new FPOs in the country with an outlay of Rs 6,850 crore.
Key People:
Pope Francis, QU Dongyu, Director General of Food and Agriculture Organization (FAO), Tang Renjian, Minister of Agriculture and Rural Affairs, Republic of China, Julien Denormandie, Minister of Agriculture and Food, Government of France, Luis Eugenio Basterra, Minister of Agriculture, Government of Argentina, Dr. Agnes Kalibata, UN Secretary General’s Special Envoy for the Food System’s Summit along with other dignitaries participated in the virtual event.

With 1% of World’s Vehicles, India accounts for 11% of Global deaths in Road Accidents: World Bank report 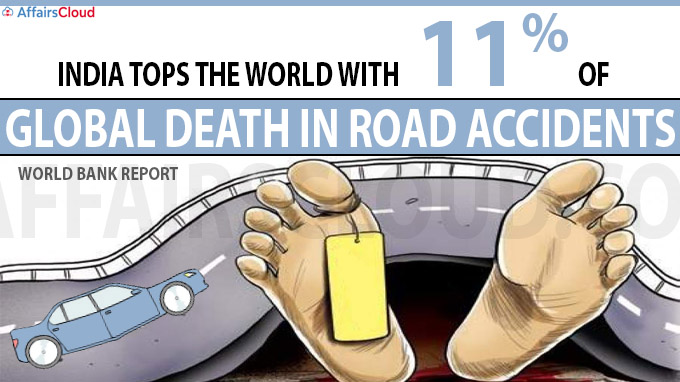 According to the report ‘Traffic Crash Injuries and Disabilities:The Burden on Indian Society’ released by the World Bank with 1% of World’s vehicles, India accounts for 11% of Global Road Accident deaths & 6% of total road crashes.
i.In India, annually around 4.5 Lakh road crashes take place out of which 1.5 Lakh people die.
ii.The World Bank report was prepared in association with Save LIFE Foundation (SLF). 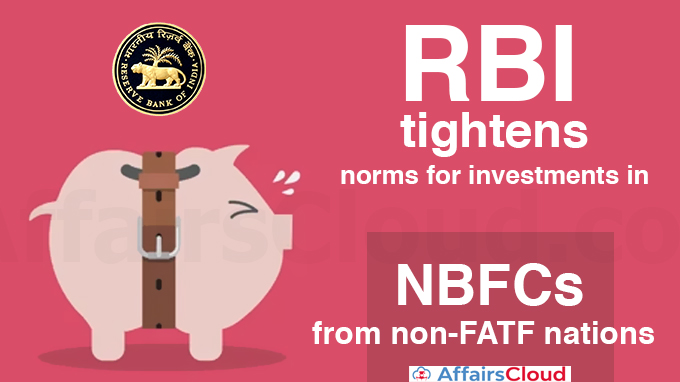 On 11th February 2021, Mastercard launched its Flagship ‘Priceless’ program – “Priceless India”. The Priceless India will enable the mastercard holders both domestic and global travellers to get exclusive access to various experiences in the iconic cities of India. The program will be executed in 2 phases: 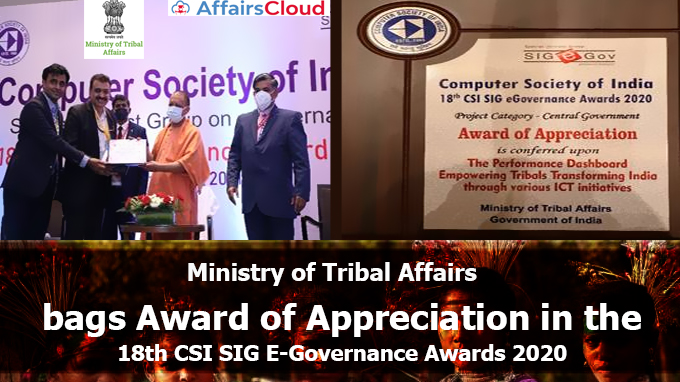 i.On 12th February 2021, the Ministry of tribal Affairs won the Award of Appreciation under Project Category Award in the 18th Computer Society of India (CSI) Special Interest Group on e-Governance(SIGe-Gov) Awards 2020 for its Performance Dashboard Empowering Tribals Transforming India through various ICT initiatives.
ii.The Gopan Department, Govt of Uttarakhand and the National Informatics Centre, Uttarakhand State Unit won the award of Excellence for the initiating the e-Cabinet (e-Mantrimandal), an initiative in the field of e-governance.
iii.CSI SIG EGovernance Awards is a series of awards instituted by the Computer Society of India (CSI) to recognise the contributions towards e-governance by the State, Departments, Districts and Project level.
About Computer Society of India (CSI):
CSI is a non profit society of computer professionals from across India.
CSI is involved in research, knowledge sharing, supporting the student community for career enhancement and to work in the activities that use the benefits of advances in IT to all the sectors of the society.
President– Gautam Mahapatra
Headquarters– Mumbai, Maharashtra
Formed in 1965
About CSI-SIGe-Gov:
The Special Interest Group on e-Governance(SIGe-Gov) is a part of the CSI which is responsible for organising the CSI SIG e-Gov.
<<Read Full News>> Indian cricketer Rishabh Pant won the The International Cricket Council (ICC) Men’s Player of the Month award for January 2021 and South African cricketer Shabnim Ismail won the ICC Women’s Player of the Month award for January 2021. This is the first edition of the ICC Player of the Month Awards.
Points to be Noted:
ICC introduced the awards in January 2021, where The ICC Voting Academy that comprises former players, broadcasters, and journalism from across the world and fans will vote to select the winner of the award.
Reason of the Award:
Rishabh Pant– The wicket keeper and batsman led India to win in 2 tests against australia by scoring, 97 at Sydney, Australia and 89(unbeaten) at Brisbane, Australia.
Shabnim Ismail- For her performance in 3 One Day Internationals (ODIs) and 2 Twenty20 International (T20I) in January 2021. The bowler took 7 wickets in ODI series against Pakistan and also took 5 wickets in the; 2nd T20I against Pakistan.
About Rishabh Pant:
i.He became the first batsman for India to get off the mark in Test cricket with a six
ii.In January 2019, during the fourth Test against Australia, Pant became the  wicket-keeper 1st India to score a century in a Test match in Australia.
About Shabnim Ismail
i.She becomes the1st  player, across men’s and women’s cricket to take 100 wickets in T20Is.
ii.She is named as one of the fastest female bowlers in the world, with her top recorded speed reaching 128 kilometres per hour (80 Miles per hour-mph).

Carlos Menem Former President of Argentina Passed Away at 90 On 14th February 2020, the former president of Argentina Carlos Menem, passed away at the age of 90 in Buenos Aires, Argentina. He was born in 1930 in Anillaco, Argentina.
About Carlos Menem:
i.Carlos Menem was elected governor of La Rioja in 1973
ii.He was elected as the 44th President of Argentina and served from 1989 to 1999.
iii.He promoted the law to reform the government and the economy of Argentina following the resignation of Raúl Alfonsín, his predecessor.
iv.Carlos MenemJusticialist Party became the senator representing La Rioja province from 2005 to 2019.
v.With the Peronist coalition “Front of All” Carlos was re-elected as the senator for a term which ends in 2023. i.The safer internet is annually observed across the globe on the 2nd day of the 2nd week(i.e. 2nd Tuesday) of February to create awareness about the emerging new online issues and current issues like cyberbullying to social networking to digital identity,
ii.The Safer Internet Day 2021 observed on 9th February 2021 marks the 18th edition of Safer Internet Day.
iii.The theme of the 2021 Safer Internet Day is “Together for a better internet”.
iv.The day was first initiated in 2004 as a part of the SafeBorders project funded by the European Union and the day was taken up by Insafe, the network of Safer Internet Centres.
v.The first Safer Internet day was observed on 6th February 2004.
About European Commission:
President– Ursula von der Leyen
Members– 27
Headquarters– Brussels, Belgium & Luxembourg
<<Read Full News>>

The Government of Maharashtra launched an online application, for the first time, through the Aaple Sarkar MahaDBT Portal (Direct Benefit Transfer). The Portal provides the benefits of various schemes of the Department of Agriculture on a single application by the Farmers. i.On February 13, 2021, the Jammu & Kashmir (J&K) Administrative Council (AC) was met under the chairmanship of Lieutenant Governor, Manoj Sinha. During the meeting the AC has approved the following proposals: 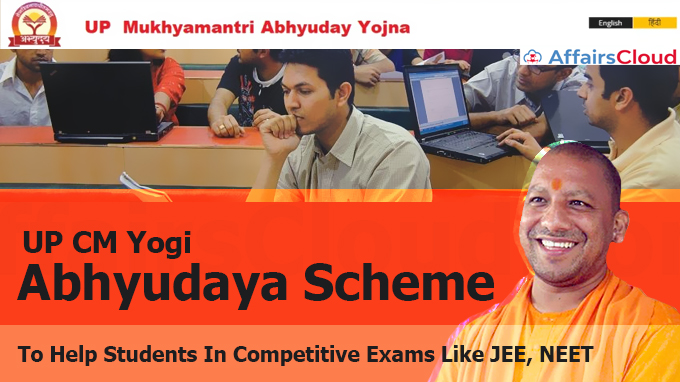 On February 15, 2020, Uttar Pradesh (UP) Chief Minister (CM) Yogi Adityanath launched ‘UP Mukhyamantri Abhyudaya Yojana 2021’. Under the scheme, Free-of-cost coaching centres will be established across the state, through which students can prepare for competitive exams like IAS, PCS, NDS, CDS, NEET & JEE.