We are here for you to provide the important Recent and Latest Current Affairs 12 January 2021, which have unique updates of Latest Current Affairs 2021 events from all newspapers such as The Hindu, The Economic Times, PIB, Times of India, PTI, Indian Express, Business Standard and all Government official websites. i.On January 10, 2021, the Ministry of Education (MoE) issued guidelines for identification, admission and continued education of migrant children for States and UTs during school closure and when the school re-open. These were issued to mitigate the COVID-19 impact for Out of School Children (OoSC).
ii.The guidelines will ensure that school going children have access to education with quality and minimize the impact of the pandemic on school education across the country.
iii.The guidelines are classified into 6 parts viz: 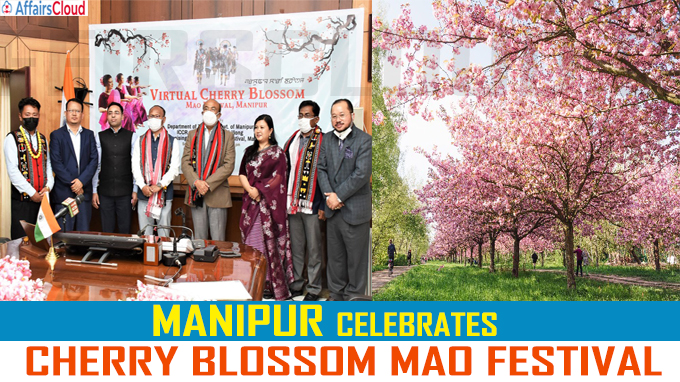 On January 9, 2021, an annual Cherry Blossom Mao Festival was held at Mao in Senapati district, Manipur. It was virtually inaugurated by Chief Minister (CM) of Manipur Nongthombam Biren Singh from the CM Secretariat in Imphal, amid COVID-19. The festival marked the beginning of pink season in the district.

Key Points:
–The festival has been organized since 2017.
–The cherry blossom flower is also known as Prunus cerasoides.
–The flower also covers the whole of east and west Khasi hills. It can be spotted across the state during the months of October and November in Meghalaya.
–Japan is renowned for its cherry blossom festival too. On January 11, 2021 Union Home Minister Amit Shah virtually launched ‘Single Window Clearance System’ for coal mines. The platform is expected to ease the process of obtaining clearances for the smooth operationalisation of coal mines. It will help in reducing the time taken to grant approvals in the sector.
i.The Unified platform will reduce the need for companies to approach different for operationalisation of coal mines, which is the main cause for delay.
ii.At Present, around 19 major approval or clearances are required to start a coal mine in the country.
iii.In 2020, India had opened up India’s coal reserves to private-sector development to boost domestic production.
Benefits:
i.The Single Window Clearance System will also boost Transparency & Ease of Doing Business reforms.
ii.Coal is also expected to be the biggest contributor towards the Government’s vision of making India a 5 Trillion Dollar Economy by 2024
About Ministry of Coal:
Union Minister – Pralhad Joshi
Headquarters – New Delhi
<<Read Full News>> 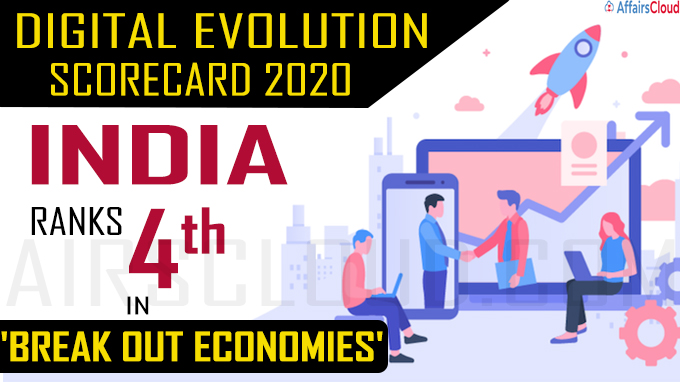 i.On January 11, 2021, the 3rd edition of Digital Evolution Scorecard 2020 developed by Tufts University’s Fletcher School in partnership with Mastercard was released in which India ranked 4th.The scorecard is topped by China followed by Azerbaijan, Indonesia.
ii.It should be noted that India doubled its mobile internet connectivity in the last four years It will add 350 million smartphones by 2023.
iii.The scorecard was published in the Harvard Business Review in December 2020.
About Mastercard:
Chief Executive Officer (CEO)– Michael Miebach
Headquarters – New York, United States (US)
<<Read Full News>> i.On January 9, 2021 Government of India appointed RS Sharma, former chief of Telecom Regulatory Authority of India(TRAI)as head of a 10 member empowered committee for administration of COVID-19  vaccine.
ii.The members of the committee comprises senior officials from the Ministry of Health and Family Welfare (MoH&FW) and the Unique Identification Authority of India(UIDAI).
ii.India will start its mega vaccination drive against coronavirus, the world’s largest inoculation programme on January 16, 2021.
<<Read Full News>> 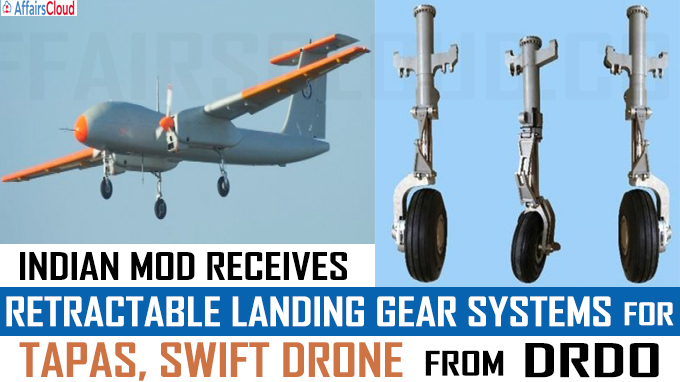 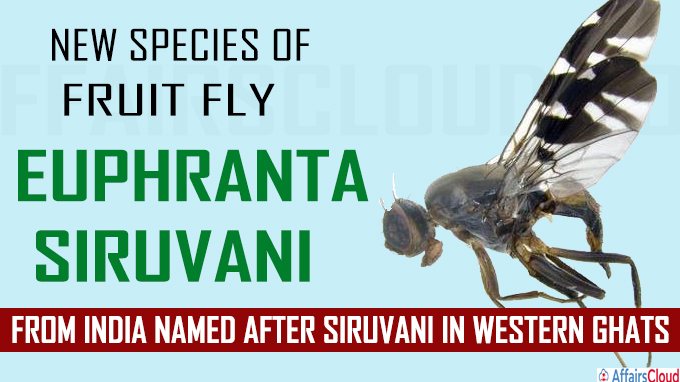 A New Species of Fruit Fly has been named ‘Euphranta Siruvani’ after it was discovered in Siruvani, Coimbatore district of Tamil Nadu. The discovery has been published in the Zootaxa Journal, which has been authored by K.J. David and K. Sachin from National Bureau of Agricultural Insect Resources, Bengaluru, D.L. Hancock from the United Kingdom, Sudhir Singh from Forest Research Institute, Dehradun & H. Sankaraman from Annamalai University.
i.The fruit fly ‘Euphranta Siruvani’ belongs to family Tephritidae and was identified by researchers from a non-forest area near Siruvani.
ii.It is differentiated from other species of Euphranta by the presence of a ‘V’ shaped black band on the wing.
iii.Globally around 104 species from genus Euphranta exist, out of which 14 are found in India. Euphranta Siruvani is the new addition to the list.
iv.Siruvani is an ecological hotspot in the Western Ghats.
‘Omyomymar hayati’:
i.Professor S. Manickavasagam from Annamalai University & Mr. Sankararaman have discovered a new fairyfly species ‘Omyomymar hayati’ from Siruvani area.
ii.It is named after Professor Mohammad Hayat, Aligarh Muslim University in order to recognize his contributions to taxonomy of Indian Chalcidoidea.
iii.The discovery has been published in the Journal of Threatened Taxa.
iv.The fairyfly feeds on eggs laid by plant feeders such as Grasshoppers.
About Tamil Nadu:
RAMSAR sites – Point Calimere Wildlife and Bird Sanctuary
Airport – Chennai International Airport, Madurai International Airport, Coimbatore International Airport, Tiruchirapalli International Airport. 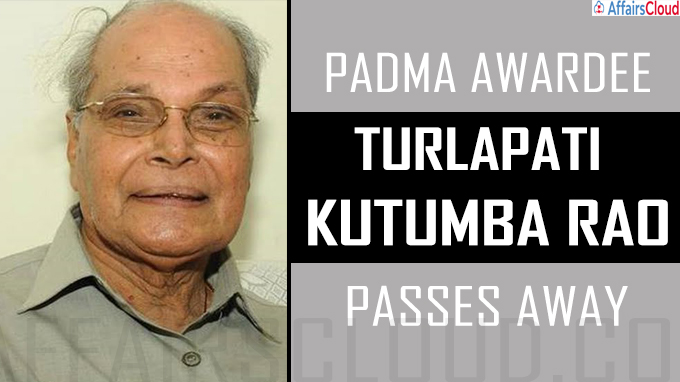 On January 11, 2021 Turlapati Kutumba Rao, Veteran Telugu Journalist, writer and orator passed away at the age of 87 in Vijayawada, Andhra Pradesh(AP).
He is the 1st journalist from AP to receive Padma Shri in 2002. He won the award for Literature and education. He served as the Secretary for Tanguturi Prakasam Pantulu, 1st Chief Minister of AP. He was born on August 10, 1933 in Vijayawada.

About Turlapati Kutumba Rao:
General Info
i.He 1st worked as a sub-editor of Vahini magazine, that was started by  Acharya NG Ranga in 1951 and later as editor for Pratibha magazine
ii.He has been in journalism for 7 seven decades. He has worked with 18 CMs, starting with Tanguturi Prakasam Pantulu to Nara Chandrababu Naidu.
Books
i.He authored biographies of several important people, patriots and freedom fighters.
ii.‘Naa Kalam – Naa galam’, an autobiography of him was released in 2012.
Honours
i.He received Pratibha Puraskar from the Telugu University, Kalaprapoorna title from Andhra University and the title of Guardian of Telugu from C. Rajagopalachari, the then Governor of Andhra Pradesh. 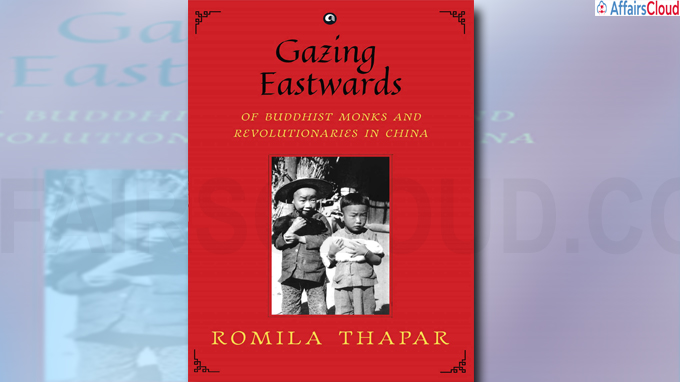 The book titled  ‘Gazing Eastwards: Of Buddhist Monks and Revolutionaries in China, 1957’ was authored by Romila Thapar, an Indian historian. The book is published by  Seagull Books London Ltd.

Essence of the Book:
i.The book accounts a few months that Romila Thapar spent in China in 1957 along with Sri Lankan art historian Anil de Silva, where she worked at two cave sites, namely Maijishan in north China and Dunhuang on the edge of the Gobi desert in Northwest China
ii.These cave sites were the locations of Buddhist monasteries and shrines from the first millennium CE.
About Romila Thapar:
Currently she is Professor Emerita at Jawaharlal Nehru University (JNU) in New Delhi.
Books
She has authored many books including the A History of India: Volume 1(1966) published by Penguin; Ancient Indian Social History: Some Interpretations(1978) published by Orient Blackswan among others.
Honours
i.She is the co-winner of the US$1 million Kluge Prize for the Study of Humanity for 2008 with Peter Brown.
ii.She is an Honorary Fellow at Lady Margaret Hall, Oxford, and at the School of Oriental and African Studies (SOAS), University of London. She was awarded the Jawaharlal Nehru Fellowship in 1976.
iii.It is to be noted that she declined the Padma Bhushan award in 1992 and 2005 as she mentioned that she will only accept awards from academic institutions or those associated with her professional work, and not state awards. 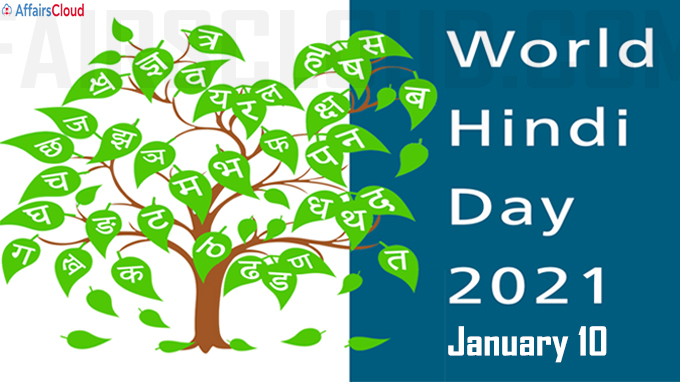 i.World Hindi Day(Vishwa Hindi Divas) is annually celebrated on January 10 across the world to promote Hindi language worldwide and to present Hindi as an international language.
ii.The then Prime Minister Manmohan Singh declared January 10 as World Hindi Day in 2006.
Why January 10?
On this day, the 1st  World Hindi Conference was held in Nagpur, Maharashtra in 1975.
<<Read Full News>> 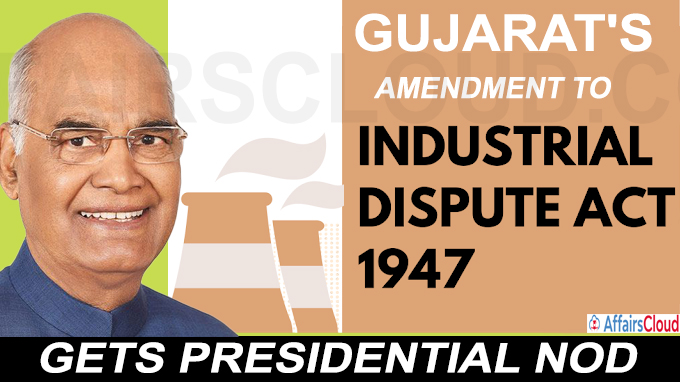 i.On January 1, 2021, The Industrial Disputes (Gujarat Amendment) Bill, 2020, which was passed in the state Assembly on September 22, 2020 received the presidential assent. The amendments ensured that the interests of workers are protected.
ii.The aim of the amendment is to increase ease of doing business by reducing the compliance burden on industries and inclusion of industry-friendly policies. It will aid in attracting new industries and investments to create more employment opportunities.
iii.As per Industrial Disputes Act 1947, establishments having 100 or more workers are required to seek prior permission of the state government before effecting layoff, retrenchment, or closure.