We are here for you to provide the important Recent and Latest Current Affairs 12 & 13 September 2021, which have unique updates of Latest Current Affairs 2021 events from all newspapers such as The Hindu, The Economic Times, PIB, Times of India, PTI, Indian Express, Business Standard and all Government official websites.

India, US agree to collaborate on Emerging Fuels during US-India SCEP 2021 i.The Ministerial meeting of the United States (US)-India Strategic Clean Energy Partnership (SCEP) 2021 held virtually was co-chaired by Union Minister Hardeep Singh Puri , Ministry of Petroleum and Natural Gas with the US Secretary of Energy Jennifer Granholm to launch the revamped U.S.-India SCEP.
ii.During this, both nations have agreed to expand their energy partnership by adding the emerging fuels to the list of areas of cooperation as a 5th pillar.
iii.The other four pillars of cooperation in this list are power and energy efficiency, oil and gas, renewable energy and sustainable growth.
About United States of America (USA):
Joe Biden is the 46th President of USA
US Secretary of State – Antony Blinken
No of States in USA – 50
>>Read Full News Nuakhai, the harvest festival of Odisha is celebrated on Bhadraba Shuklapakhya Panchami tithi, the next day of Ganesh Chaturthi i.e., September, 11, 2021. It marks the consumption of the first harvested crops. 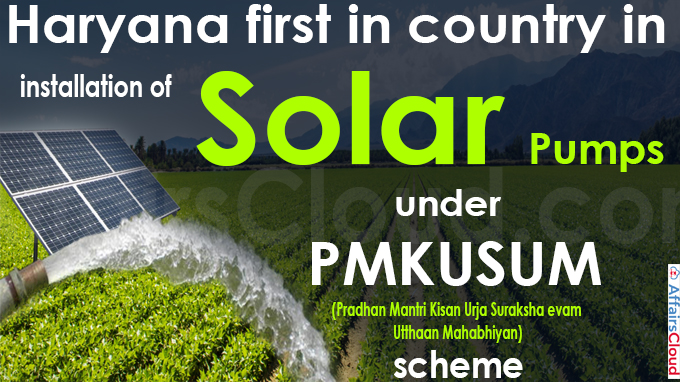 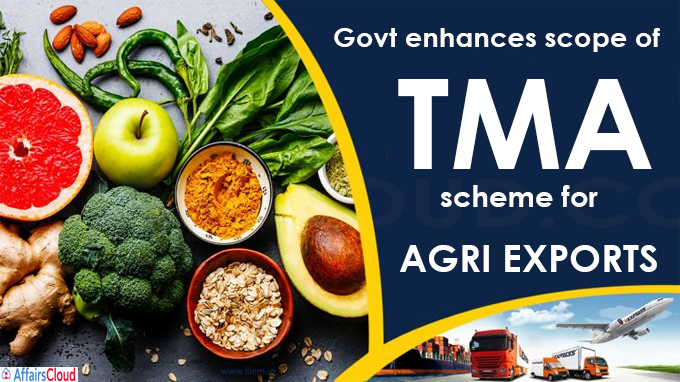 The Government of India has enhanced the scope of the Transport and Marketing Assistance(TMA) for specified agriculture products schemes by including dairy products under its purview and increasing the rates of assistance.
The rates of assistance have been increased by 50% for exports by sea and 100% through the air. 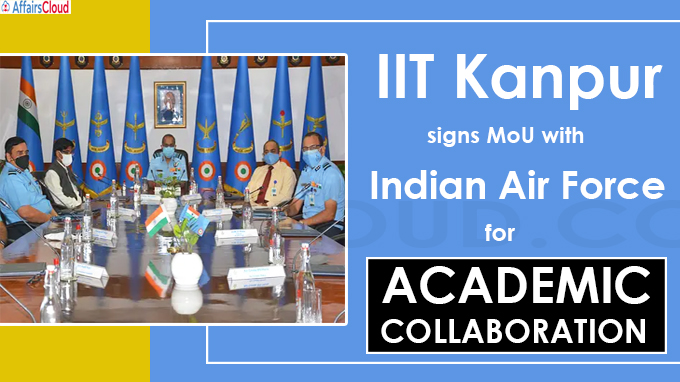 Indian Institute of Technology (IIT) Kanpur and Indian Air Force (IAF) Signed an Memorandum of Understanding (MoU) for Collaboration in the field of Academics and Research in the domain Aerospace Technology & for the establishment of the Air Vice Marshal Harjinder Singh, VSM Class I MBE, Chair of Excellence and Research Scholar Program (RSP) for Indian Air Force Officers at the IAF Headquarters, New Delhi, Delhi. 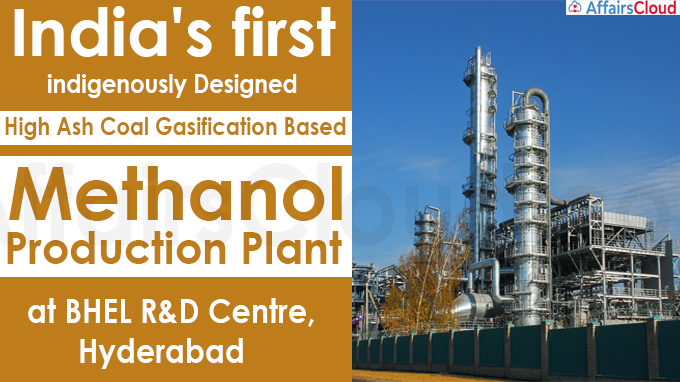 India’s 1st Indigenously Designed High Ash Coal Gasification Based Methanol Production Plant was inaugurated in Bharat Heavy Electricals Limited (BHEL), R&D centre at Hyderabad, Telangana.The Plant was designed with support from the National Institution for Transforming India (NITI) Aayog to produce 0.25 ton per day(TPD) methanol. The project was supported by the Department of Science and Technology with a Rs 10 crore grant.
About the Plant:
i.The Plant will create 0.25 TPD Methanol from high ash Indian coal using a 1.2 TPD Fluidized bed gasifier.
ii.The methanol purity of the crude methanol produced is between 98 and 99.5 percent.
Reason for the Development:
i.Inorder to reduce the dependency on importing foreign oil & to meet the needs of India,BHEL produce the Methanol or Di Methyl Ether (DME) which can be used as an alternative liquid fuel for transportation and to power ship engines.
ii.This will also lower Green House Gas emission.
Future Enhancements:
BHEL is working on Blue Hydrogen, Hydrogen CNG (H-CNG) and Green Hydrogen… we are blending hydrogen with compressed natural gas for use as a transportation fuel as well as an industrial input to refineries.
About Bharat Heavy Electricals Limited (BHEL)
Chairman & Managing Director (CMD) – Dr. Nalin Shinghal
Headquarter – New Delhi, Delhi The 5th World Conference of Speakers of Parliament (5WCSP) 2021 was held in Vienna, Austria from September 7-8, 2021 . The Loksabha Speaker Om Birla participated in the conference, organized by the Austrian Parliament, Inter-Parliamentary Union (IPU) and the United Nations (UN). Amazon Pay, a wholly owned subsidiary of Amazon in partnership with Kuvera, Investment platform will provide wealth management services to its 50 million customers across India.
It is the first ever wealth management tie-up for amazon across the world. 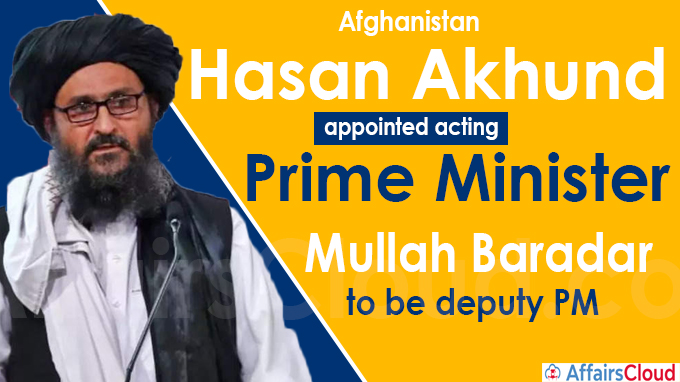 Mullah Mohammad Hassan Akhund, a leading member of the Taliban has been appointed as the acting Prime Minister(PM) of the Islamic Emirate of Afghanistan. Aziz Akhannouch, the leader of the liberal National Rally of Independents (RNI) ,is  appointed as the new Prime Minister of Morocco. He was appointed by the Moroccan King Mohammed VI.
Highlights

About Aziz Akhannouch
i.Akhannouch is one of the wealthiest people in Morocco, with an estimated wealth around $2 billion (€1.7 billion).
ii.Since 2016, he has been the leader of the RNI party, which is seen to have close ties to the royal household.
iii.Akhannouch is CEO of the Akwa Group, a Moroccan conglomerate operating mainly in the oil and gas sector. He has also served as Agriculture Minister since 2007.
About Morocco
Capital –Rabat
Currency- Moroccan Dirham About Rahul Dravid:
i.Rahul Dravid, who was called the “The Wall”, was appointed as the coach of the India A Team and Under 19 cricket team.
ii.The government of India has honoured him with Padma Shri and Padma Bhushan in 2004 and 2013 respectively.
iii.The Arjuna Award for Cricket was awarded to him in 1998.
About Piramal Realty:
Piramal Group is a global business conglomerate, with business interests in Pharma, Information Management, Financial Services, Glass Packaging and Real Estate.
Founder– Anand Piramal
Headquarters– Mumbai, Maharashtra
Founded in 2012 Gujarat Chief Minister Vijaybhai Ramniklalbhai Rupani, 65, submitted his resignation to the Gujarat Governor Acharya Devvrat. He succeeded Anandiben Patel and was sworn in as the Chief Minister of Gujarat on 7 August 2016. 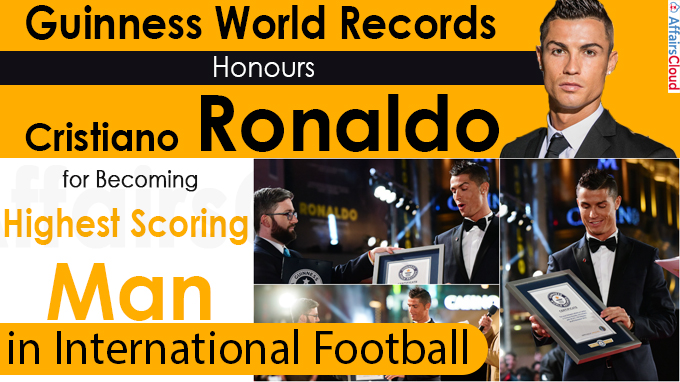 Guinness World Records has honoured Portugal football player Cristiano Ronaldo for becoming the highest-scoring man in International football history with his 111th goal for Portugal against Ireland in a World Cup qualifier. This marked his 180th game representing Portugal.

Note:
Ronaldo and Daei are the only men to score more than 100 goals for their countries.
About Cristiano Ronaldo:
i.Cristiano Ronaldo, the captain of the Portugal National football team, has represented the  Premier League club Manchester United and  Real Madrid.
ii.He became the first player to score in five different editions of the continental tournament, taking his haul to 11 to overtake Michel Platini’s record of nine goals at Euros.
iii.With 137 goals he became the top scorer in the history of the champions league. The National Forest Martyrs Day is annually observed across India on September 11th to pay tribute to the people who laid down their lives to protect the environment, forests and wildlife across India.
The 11th September 2021 marks the observance of the 16th National Forest Martyrs Day.
Background:
i.The National Forest Martyrs Day was made official following the declaration made by the Ministry of Environment, Forest and Climate Change(MoEF&CC) in 2013.
ii.In 2020 the observance of the national forest Martyrs day was made at national level by the MoEF&CC.
Why September 11?
The 11st september was chosen to commemorate the Khejarli massacre on 11th september 1730.
About Ministry of Environment, Forest and Climate Change(MoEF&CC):
Union Minister– Bhupender Yadav(Rajya Sabha- Rajasthan)
Minister of State– Ashwini Kumar Choubey(Constituency- Buxar, Bihar)
>>Read Full News

World EV Day is annually observed across the globe on 9th September to mark the celebration of e-mobility. The day is observed with special awareness campaigns aimed to globally educate people on the benefits of electric vehicles(EV). 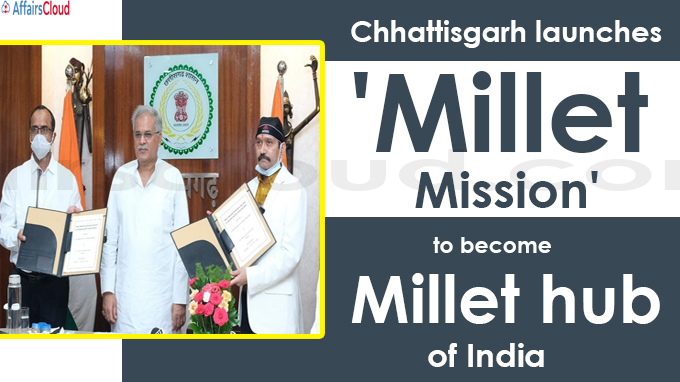 The Chief Minister (CM) of Chhattisgarh, Bhupesh Baghel launched the Millet Mission in the capital Raipur. He signed a Memorandum of Understanding (MoU) with Indian Institute of Millet Research (IIMR)Hyderabad and the Collectors of 14 districts of the state. The mission will provide affordable accurate prices to farmers for small cereal crops and input assistance, procurement arrangements will also be provided.

District – Kanker, Kondagaon, Bastar, Dantewada, Bijapur, Sukma, Narayanpur, Rajnandgaon, Kawardha, Gaurela-Pendra-Marwahi, Balrampur, Koriya, Surajpur and Jashpur.
(Note– International Year of Millets-2023)
Millet Mission–
i.Under this mission, farmers will produce Kodo-Kutki and Ragi crops. Rs.9000 per acre and Rs.10,000 per acre input assistance will be given to farmers who grow Kodo-Kutki and Ragi crops respectively. The State Government has decided to procure Kodo, Kutki and Ragi on support price and to include these crops under Rajiv Gandhi Kisan Nyay Yojana.
ii.Krishi Vigyan Kendras are set up to provide training to the farmers. At the same time, the value addition of these crops will also provide employment and the economic condition of the farmers will also improve.
iii.Seed banks for small grain crops would be established in Bastar, Surguja, Kawardha and Rajnandgaon.Keeping in view the rich nutrients found in small cereal crops, the district administration and Krishi Vigyan Kendra in North Bastar (Kanker) district are giving information to the farmers of the district for improved farming under Millet Mission.
iv.After processing, these crops will be used in schemes like midday meals, public distribution systems and nutrition programmes which will add nutrition to the diet.
Role of women
Women of self-help groups (SFGs) engaged in collection and processing work have been provided employment for more than 850 days.
About Chhattisgarh
Wildlife Sanctuary– Tamor Pingla Wildlife Sanctuary, Udanti Wild Buffalo Wildlife Sanctuary
Airport- Swami Vivekananda Airport,Jagdalpur Airport, OP Jindal Airport
Festivals– Bastar Dussehra, Bastar Lokotsav, Fagun Wadai 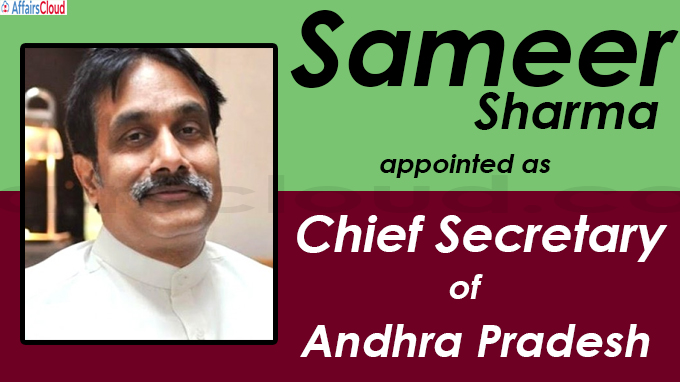 About Andhra Pradesh
It is the only state with three proposed capitals.Visakhapatnam is being the executive capital while Amaravati and Kurnool are legislative and judicial capitals, respectively.
Chief Minister – Y.S. Jagan Mohan Reddy
Governor – Biswabhusan Harichandan