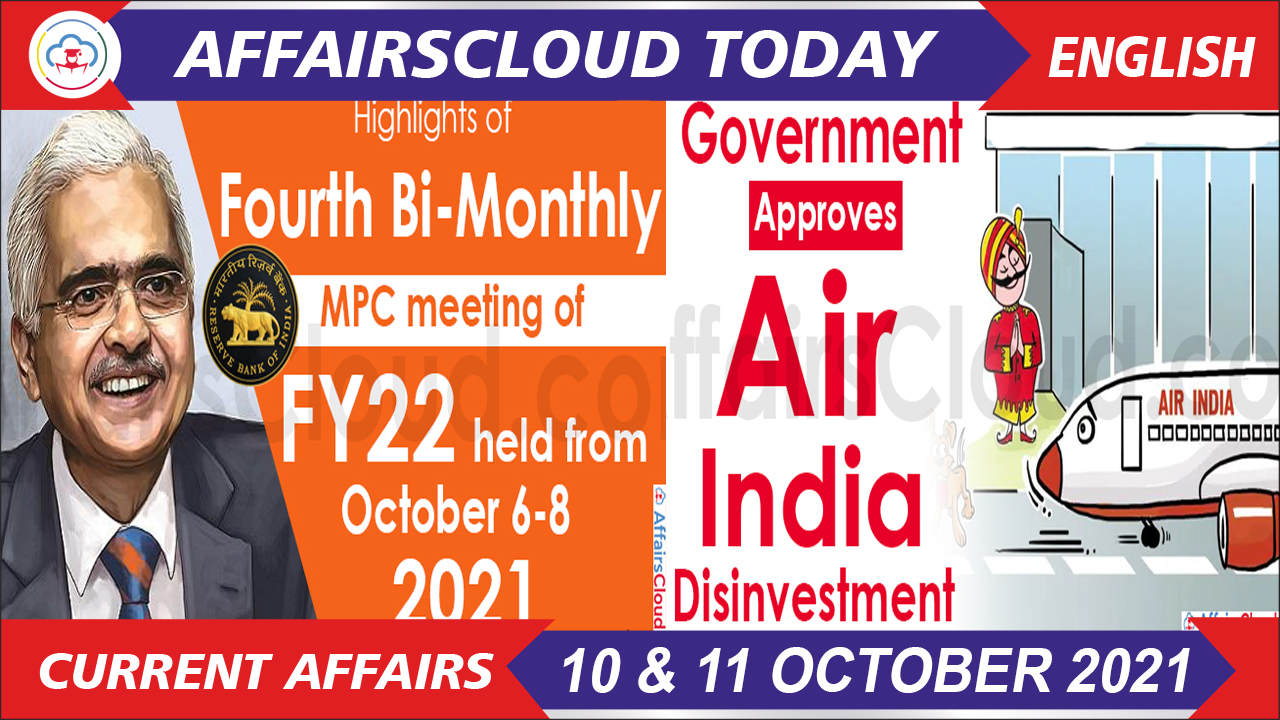 We are here for you to provide the important Recent and Latest Current Affairs 10 & 11 October 2021, which have unique updates of Latest Current Affairs 2021 events from all newspapers such as The Hindu, The Economic Times, PIB, Times of India, PTI, Indian Express, Business Standard and all Government official websites. 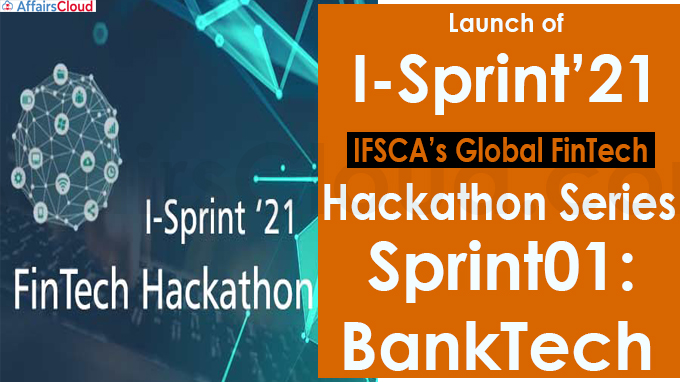 Partners:
The Partners to the Hackathon are ICICI (Formerly Industrial Credit and Investment Corporation of India) Bank, HSBC (Hongkong and Shanghai Banking Corporation Limited) Bank, iCreate (International Centre for Entrepreneurship and Technology), Zone Startups and Invest-India.
Key Points:
i.The aim of the Hackathon is to connect IFSCA and GIFT IFSC with FinTech Ecosystem to solve business problems and to promote retail business for the Banking Units at GIFT IFSC.
ii.The finalists of this Hackathon shall be allowed direct entry into IFSCA Regulatory/Innovation Sandbox.

iii.FinTechs of this hackathon will also get an opportunity to show-case during the Flagship FinTech Forum of IFSCA in December 2021.
iv.iCreate sponsored Price money of Rs 24 lakh for the same while Zone Startups India’s network will provide Business Support Solution Partner benefits of upto $25,000 per startup.
About International Financial Services Centres Authority (IFSCA):
It is a unified authority vested with the powers of all four financial sector regulators in India viz. Securities & Exchange Board of India (SEBI), Reserve Bank of India (RBI), Insurance Regulatory and Development Authority of India (IRDAI) and Pension Fund Regulatory and Development Authority (PFRDA). 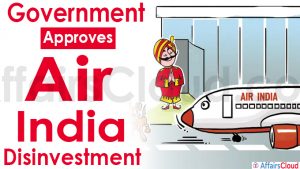 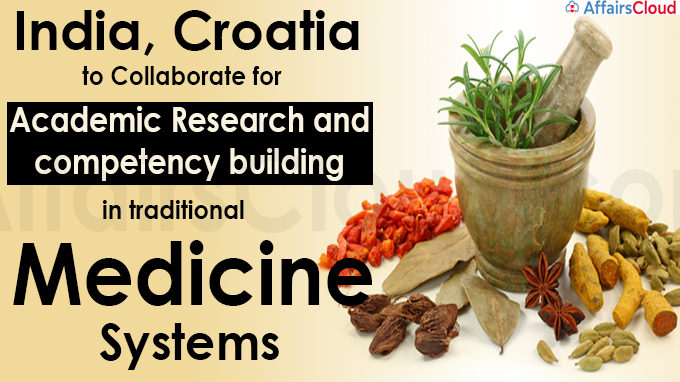 India’s All India Institute of Ayurveda under Ministry of Ayush and Croatia’s Kvarner Health Tourism Cluster entered into a memorandum of understanding (MoU) for academic collaboration in traditional medicine systems, especially in the field of ayurveda.

Objectives
i.To undertake academic activities in the field of ayurveda in collaboration with the identified institutions.
ii.To cooperation and collaboration on research, study design, developing evidence-based guidelines for integrating ayurvedic principles and practices with modern medicine.
iii.To develop academic standards and courses in accordance with the needs of the institution, end-users and stakeholders
iv.To develop ayurvedic medical education guidelines for ayurveda education in Croatia.

First International Conference on Yoga and Ayurveda
1st International Conference on Yoga and Ayurveda was held between Oct 3 to 5, 2021 in Zagreb, the capital of Croatia.The Embassy of India, Zagreb organised the conference with the support of the Ministry of AYUSH.A six-member delegation, led by Special Secretary Ayush Shri Pramod Kumar Pathak attended the conference. Union Minister for Fisheries, Animal Husbandry and Dairying ParshottamRupala launched a nationwide, river ranching programme at Brijghat, Garh Mukteshwar in Uttar Pradesh as part of the government’s efforts to boost fish production in the country. 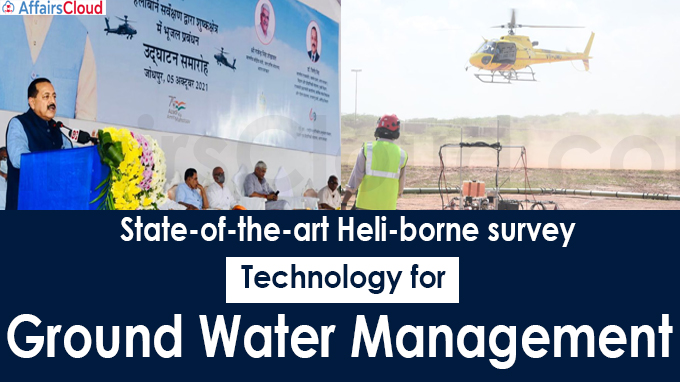 In October 2021, Jitendra Singh, Union Minister of State (Independent Charge) Science & Technology, launched the state-of-art Heli-borne survey technology for groundwater management, which was developed by Council of Scientific and Industrial Research–National Geophysical Research Institute (CSIR-NGRI), Hyderabad.
System Capability – The technology has the capability to provide High resolution 3D images of groundwater resources at a depth of 500 meters.
i.Jitendra Singh launched the technology at Jodhpur in Rajasthan, which will be implemented in the arid & semi-arid regions of 4 states – Rajasthan, Gujarat, Punjab & Haryana for tracking potential groundwater resources.
ii.This survey will be carried out in two phases, of which the first phase comprises an area spanning 1 lakh sq km.This includes 65,000 sq km across eight districts in Rajasthan, 32,000 sq km across five districts of Gujarat and 2,500 sq km in two districts of Haryana. 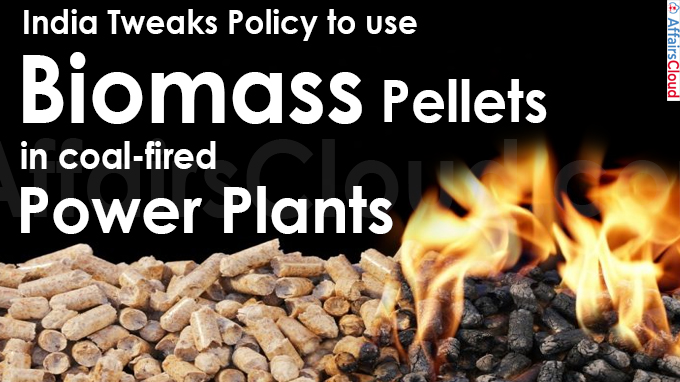 Ministry of Power, Government of India, has set a revised policy to use biomass pellets in coal-burning thermal power plants. This encourages the use of agricultural waste, which will be burnt by the farmers causes air pollution.
About the revised policy:
i.The revised policy has made it mandatory for 3 categories of thermal power plants to use a 5% blend of biomass pellets along with coal.
ii.The revised policy will come into force in October 2022, with a requirement to increase the proportion of biomass to 7% within 2 years of the power plant.
iii.The policy will be in force for 25 years or until the useful life of the thermal power plant.
Background:
The paddy stalks and straws burned by the farmers of North India to prepare for the lands for planting causes air pollution which results in the formation of smog over North India.
About Ministry of Power: Union Minister- Raj Kumar Singh(Constituency- Arrah, Bihar) Minister of State- Krishan Pal Gurjar (Constituency- Faridabad, Haryana) 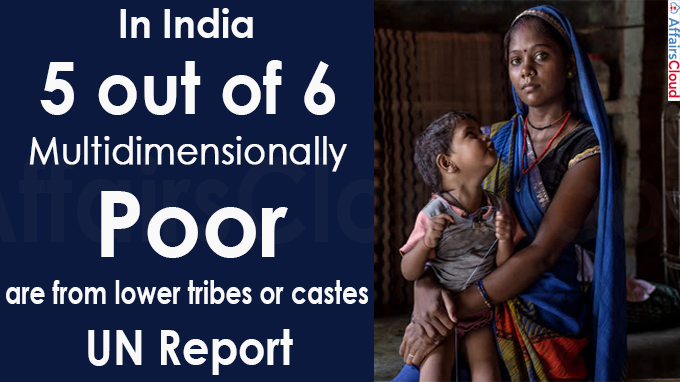 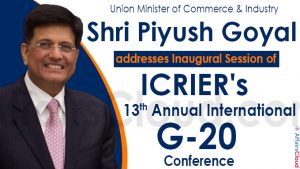 Highlights of the Fourth Bi-Monthly Monetary Policy of FY21-22 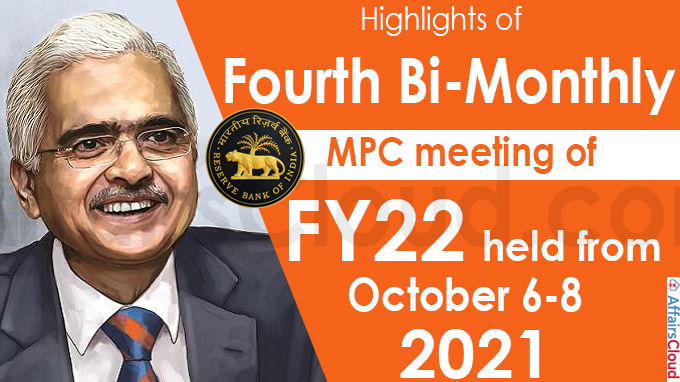 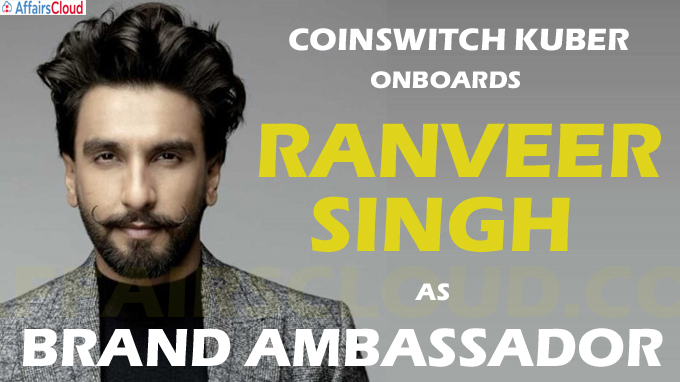 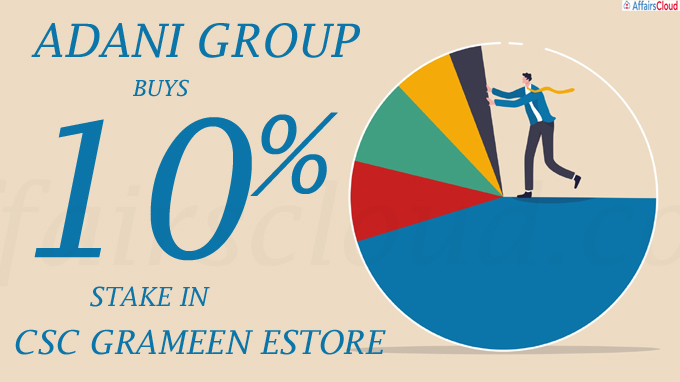 On October 7, 2021, Indian Naval Fast Attack Craft (IN FAC) T 80 was decommissioned during a ceremony at Naval Dockyard, Mumbai (Maharashtra).

Key Points:
i.Commissioned in Indian Navy (IN) in June 1998 by then Vice Admiral Madhvendra Singh, Flag Officer Commanding-in-Chief, Western Naval Command, it was the first of the Super Dvora Mk II class, built by IAI Ramta at Be’er Sheva, Israel.
ii.It was specially designed for shallow water operations and can get the speeds of up to 45 knots.
iii.The ship had actively participated in several coastal security and mine-laying operations and patrolled waters extensively to provide security to Mumbai high and the coasts of Maharashtra and Gujarat.

For the first time in the history, Indian table tennis contingent has won 3 Bronze medals in the 2021 Asian Table Tennis Championship organised by the International Table Tennis Federation (ITTF) at Doha, Qatar between 28th September and 5th October 2021. Two of the Three medals came from Men’s Doubles event, while the 3rd medal was won by the Indian Men’s Team.
Medal Winning Teams: 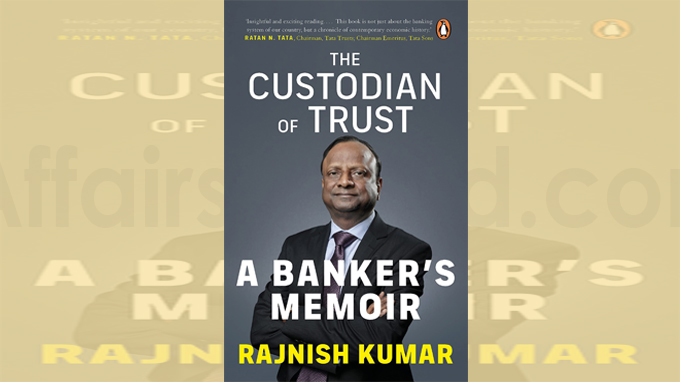 The debut book of Rajnish Kumar, former Chairman of State Bank of India (SBI), named “The Custodian of Trust” is set to be released on 18th October 2021. The book published by Penguin Random House India, discusses various memories of Rajnish Kumar with India’s banking & financial sector.
i.Rajnish Kumar shares noteworthy experience, in his 40 years of service with SBI including 3-years as its Chairman, on the critical role played by banks in India’s fight to eliminate poverty.
ii.Some critical points discussed in the book include, the challenges faced during demonetization, Non-Performing Assets (NPA), crisis in Jet Airways & Yes Bank among others.
About Rajnish Kumar:
i.Rajnish Kumar joined SBI as a Probationary Officer in 1980, later in 2015 he became the Managing Director (National Banking Group) and the Managing Director (Compliance & Risk) of SBI.
ii.He served as SBI Chairman for a 3 years’ term between October 2017 to October 2020.
iii.Currently, he is the Director on the board of HSBC Asia Pacific, L&T Infotech Ltd & Lighthouse Communities Foundation. The United Nations (UN)’s World Post Day is annually observed across the globe on October 9th to commemorate the anniversary of the establishment of the Universal Postal Union (UPU) in 1874. 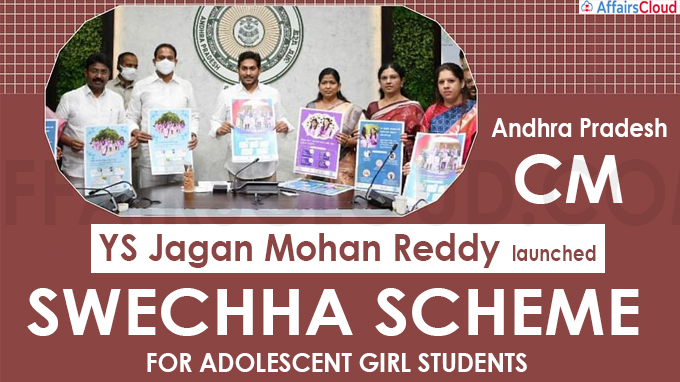 Objective of the programme
i.To provide quality sanitary napkins free of cost to over 10 lakh girls studying class 7 to 12.
ii.Each girl will be given 10 napkins per month or 120 napkins a year.
Implementation of the programme
i.Teachers will be appointed as nodal officers in schools.
ii.An awareness programmes will be conducted for girl students on menstrual hygiene and proper disposal of used sanitary pads.
iii.Under the Clean Andhra Pradesh Programme (CLAP), separate dustbins and 6,417 incinerators will be set up.
iv.As part of initiatives aimed at women’s empowerment, quality sanitary napkins will be sold at Cheyutha shops at affordable prices.
About Andhra Pradesh
Governor – Biswa Bhusan Harichandan
National Parks: Rajiv Gandhi National Park located in (Rameswaram) Kadapa, Papikonda National Park located in East & West Godavari and Sri Venkateswara National Park (biosphere reserve) located in Chittoor