We are here for you to provide the important Recent and Latest Current Affairs 1 September 2021, which have unique updates of Latest Current Affairs 2021 events from all newspapers such as The Hindu, The Economic Times, PIB, Times of India, PTI, Indian Express, Business Standard and all Government official websites. Lieutenant Governor(LG) Radha Krishna (RK) Mathur inaugurated a 2 day ‘ Ladakh Nomadic Festival’ in the region of Changthang at Korzok Phu, Ladakh.The event was organised by Ladakh Cultural Academy in association with the Department of Tourism.

Children living as Migrants or Refugees increased to 35.5mn in 2020: UNICEF Report In accordance with the report titled ‘Uncertain Pathways: How gender shapes the experiences of children on the move’ by the United Nations Children’s Fund (UNICEF), the number of persons living outside their birth country or citizenship reached a record high of 281 million in 2020, representing 3.6% of the global population.In this, 36 million of them were recorded as children.

Key figures:
i.10 million child refugees were displaced due to conflict and war.  Around 5.1 million were boys and 4.9 million were girls.
ii.In this displacement scenario, boys outnumbered girls by 1.2 million or 6.7% which is the largest difference ever recorded.
iii.In a year, there were almost 15 million new displacements or 41,000 each day.
iv.Nearly two-thirds of all international migrants in 2020 (including refugees) were born in middle-income countries. Only 13% were born in low-income countries.
v.The Middle East and North Africa region is home to the largest number of international child migrants with greatest gender imbalance. The Indian Navy has conducted the 1st Ever Maritime Partnership Exercise with the Algerian Navy in the Mediterranean Sea on 29th August 2021. 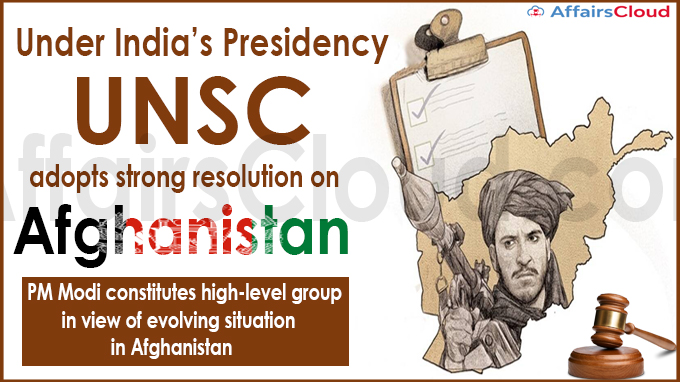 United Nations Security Council (UNSC), the 15-Nation body has adopted a strong resolution on Afghanistan under India’s Presidency. China & Russia abstained from voting on the resolution. BharatPe launched a P2P (Peer-to-Peer) investment-cum-borrowing application named the ‘12% Club’, which will enable its consumers to invest and borrow at a 12 percent interest rate. 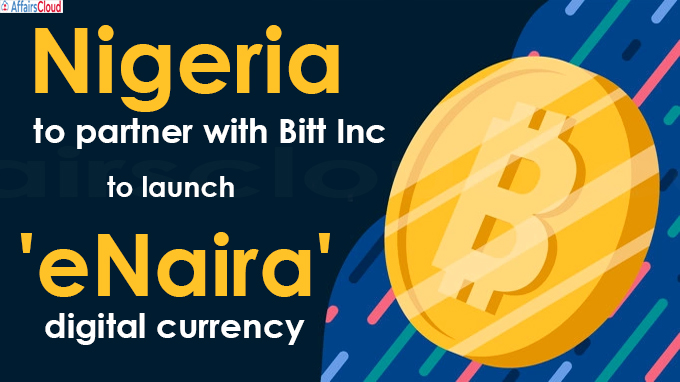 Nigeria’s Central Bank announced the partnership with Bitt Inc, the global fintech company, as a technical partner for the launch of its own cryptocurrency ‘eNaira’ by the end of 2021. 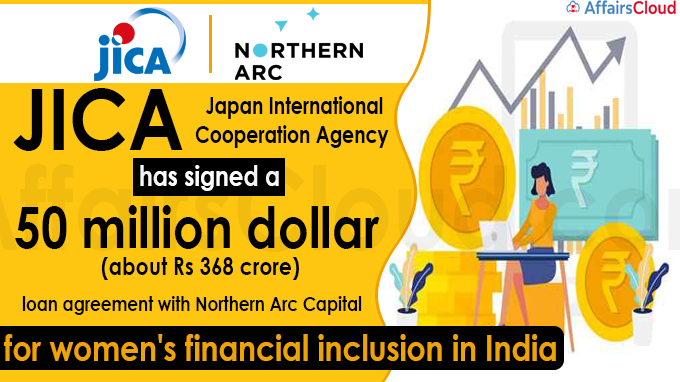 Simplilearn, one of the world’s leading certification training providers, has partnered with the International Institute of Information Technology(IIIT), Bangalore and National Payments Corporation of India(NPCI) to provide an advanced executive programme in cybersecurity. The India Mortgage Guarantee Corporation (IMGC) is the country’s first and only mortgage guarantee company that had entered into the partnership with Clix Housing Finance Limited (HFL) to offer mortgage-backed home loan products for salaried and non-salaried customers in the affordable housing segment. The Reserve Bank of India(RBI) gave the approval to the appointment of Sanjeeb Chaudhuri as the part-time chairman of IDFC(Infrastructure Development Finance Company) FIRST Bank Limited.Meanwhile he would continue to hold the office of the director owing to SEBI (Security and Exchange Board of India) order or any such authority.

About Reserve Bank of India The board of Ujjivan Small Finance Bank (SFB) appointed Carol Furtado as an ‘officer on special duty (OSD)’ till September 30, 2021. Then from October 1, 2021, she will take charge as the interim Chief Executive Officer (CEO) of the bank, subject to the Reserve Bank of India’s (RBI) approval.

Key Points:
i.Carol Furtado will be responsible for handling the day-to-day operations of the bank.
ii.She has been associated with Ujjivan SFB since inception.
iii.Notably, the board of Ujjivan SFB will submit two names for interim CEO to RBI for approval.
About Ujjivan Small Finance Bank (USFB):
Establishment– 2017
Tagline– Build a Better Life
Headquarter– Bengaluru, Karnataka 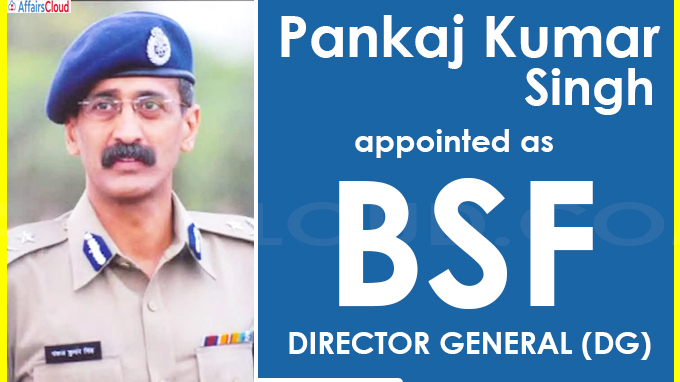 The Appointment Committee of the Cabinet(ACC) appointed Pankaj Kumar Singh as the Director General(DG) of Border Security Force(BSF).He will take charge after the retirement of Indo Tibetan Border Force (ITBP) DG Surjeet Singh(S S) Deswal, who is holding additional charge as DG of BSF after the tenure Rakesh Asthana.
About Pankaj Kumar Singh:
i.He is a Indian Police Service(IPS) Officer of 1988 batch from Rajasthan cadre. The office tenure will last till his superannuation on December 31,2021.
ii.He is presently serving as the special director general (DG) of the force that guards over 6,300 km of the Indian fronts with Pakistan and Bangladesh.
Other Appointments:

The Appointment Committee of Cabinet (ACC)-
i.The committee is headed by the Prime Minister,The Minister of Home Affairs and Minister in-charge of the concerned Ministry are the members of this committee.
The important functions of the committee are: 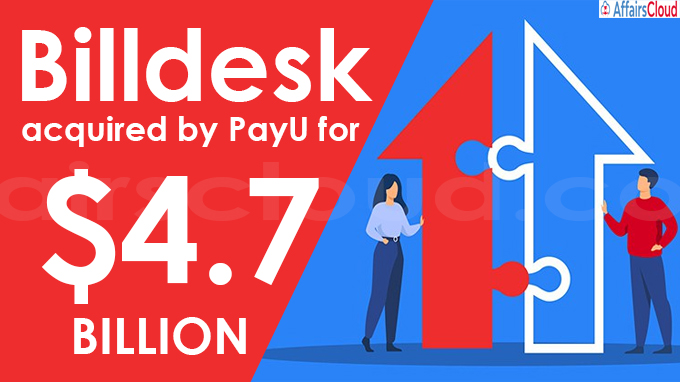 PayU Payments Private Limited (PayU), a subsidiary of Prosus has entered into an agreement with the shareholders of IndiaIdeas.com Limited (BillDesk)to acquire 100% of its Equity shares for 4.7 Billion USD (around Rs 34 thousand Crores).
Prosus NV is a global consumer internet group and technology investor.

Reason for acquisition:
The partnership between PayU and BillDesk will enable them to meet the payment needs of digital consumers, merchants and government enterprises in India and provide the state of the art technology to the excluded sections of the society.
Additional info:
i.According to the Reserve Bank of India (RBI)’s FY21 annual report, the number of transactions for digital retail payments has increased by more than 80% from 24 billion in 2018-2019 to 44 billion in 2020-21.
ii.RBI expects that more than 200 million new users will adopt digital payment in the next 3 years.
About IndiaIdeas.com Limited (BillDesk):
Co-founders– M.N. Srinivasu, Ajay Kaushal, Karthik Ganapathy
Headquarters– Mumbai, Maharashtra
Founded in 2000 Kotak Mahindra Bank is set to sell its 20 crore equity shares (around 8.57%) of Airtel Payment Bank Limited(APBL) to Bharti Enterprises Limited for a cash consideration of around Rs 294.8 crore.

Key points:
i.The sale of the equity shares is expected to be completed on or before 15th September 2021 for the cash consideration of around Rs 294.8 crore, to be determined according to the terms of the share purchase agreement.
ii.Kotak Mahindra Bank acquired these shares for Rs 200 crore invested in trenches during calendar years 2016 and 2017.
About Kotak Mahindra Bank:
Kotak Mahindra Bank was established as Kotak Mahindra Finance Ltd in 1985 and converted to Kotak Mahindra Bank in 2003.
MD & CEO- Uday Kotak
Headquarters– Mumbai, Maharashtra
Tagline– Let’s Make Money Simple
About Airtel Payment Bank Limited(APBL):
APBL commenced its operation as a payment bank with effect from 23rd November 2016.
MD & CEO– Anubrata Biswas
Headquarters– New Delhi
Incorporated on April 1, 2010 The SpaceX’s Dragon spacecraft was launched from a recycled Falcon 9 rocket from the NASA’s (National Aeronautics and Space Administration) Kennedy Space Center on Merritt Island, Florida carrying shipment of ants, avocados and a human-sized robotic arm toward the International Space Station (ISS).

Key Points:
i.The Dragon carried more than 4,800 pounds (2,170 kilograms) of supplies and experiments, and fresh food including avocados, lemons and even ice cream for the space station’s seven astronauts.
ii.The Girl Scouts sent ants, shrimp and plants for experiments while University of Wisconsin-Madison scientists sent seeds from mouse-ear cress, a small flowering weed used in genetic research. There are also Samples of concrete, solar cells and other materials for research.
iv.There is also a robotic arm which is sent to the ISS. It is manufactured by a Japanese start-up to perform chores around the Station.
What is the International Space Station (ISS)?
It is a home to astronauts in the form of large spacecraft which orbits around the earth. Its objective is to do research which could not be done on earth. It has science labs from the United States (NASA), Russia (Roscosmos), Japan (JAXA) and Europe (ESA). Azadi ka Amrit Mahotsav
It is an initiative by  the Government of India (GoI) to organise a series of events to commemorate the 75th Anniversary of India’s Independence. 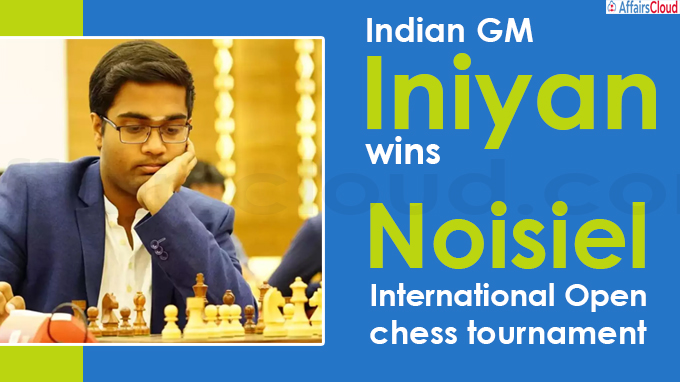 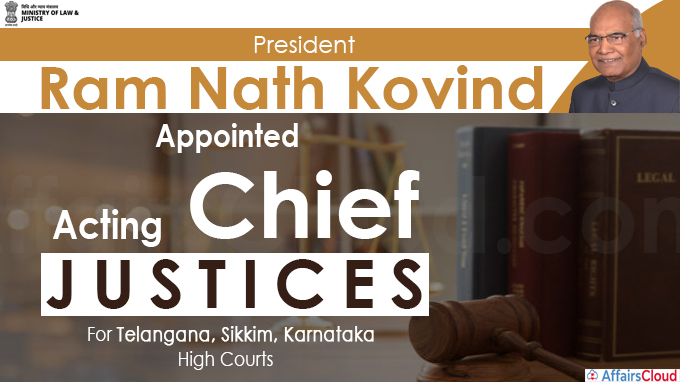 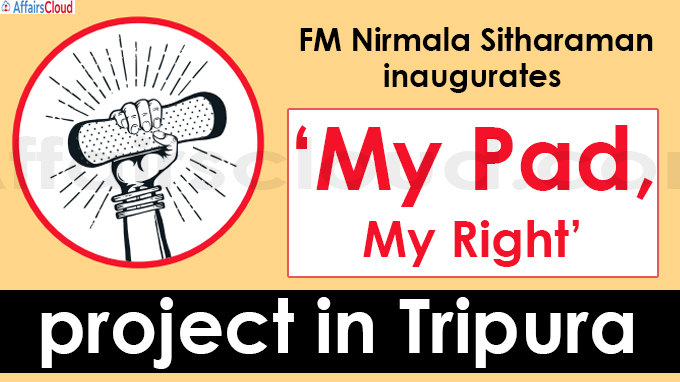 Nirmala Sitharaman, Union Minister of Finance has launched the “My Pad My Right” (MPMR) project, at Killa Village, Gomati District, Tripura on the concluding day of her 2-day visit to Tripura.
MPMR project is an initiative of the National Bank for Agriculture and Rural Development (NABARD) and NABFOUNDATION, a wholly-owned subsidiary of NABARD to install low cost sanitary pad making machines in more than 700 districts.
Aim of MPMR project:
To bring livelihood and menstrual hygiene closer to rural women by way of grant, wage support and capital equipment.
Features of MPMR Project:
Under the MPMR Project, one sanitary pad making machine, raw materials for two months, wages for 50 days, packaging material with accessories and a five-day training in three phases will be provided.
Other initiatives:
i.Finance Minister Nirmala Sitharaman flagged off the mobile ATM van of Tripura State Co-Operative Bank Limited which is set to cover all the Gram Panchayats and Village Committees of South Tripura District.
ii.She also interacted with the Women Self Help Group(SHG) members under the Micro-Enterprise Development Programme (MEDP) of NABARD.
About Tripura:
Chief Minister– Biplab Kumar Deb
Wildlife Sanctuary– Gomati Wildlife Sanctuary; Rowa Wildlife Sanctuary
Airport– Maharaja Bir Bikram Airport; Kamalpur Airport; Khowai Airport The Chandigarh Administration has signed an Agreed In Principle (AIP) with the Indian Air Force (IAF) to establish the Air Force Heritage Center in the Government Press Building, Chandigarh.

Key features:
i.IAF will showcase its vintage aircraft, armaments, memorabilia with video-audio display & other IAF artefacts.
ii.The heritage center will be an iconic place by attracting tourists from India & Abroad. It will be one of the most educative and informative centres for the people.
iii.This will act as a platform to motivate youths of our nation to join the AirForce and further reinforce national integration.
iv.The center will also include a simulator wherein the public can experience the flying of the IAF aircraft.
About Chandigarh
Administrator/Governor – Banwarilal Purohit
UNESCO World Heritage Site – Complexe du Capitole, designed by the architect, Le Corbusier
Airport – Shaheed Bhagat Singh International Airport
About Indian Air Force (IAF):
Chief of the Air Staff – Marshal RKS Bhadauria
Headquarters – New Delhi