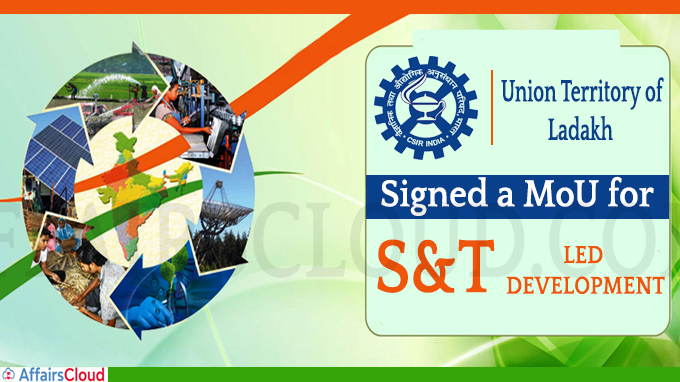 On January 29, 2021 Council of Scientific and Industrial Research (CSIR) has signed MoU with Ladakh Union Territory (UT) to speed up the development of Ladakh using Science & Technology(S&T) interventions

To establish a knowledge partnership between Ladakh UT and CSIR, that aims to make improvement in the following areas:

iii.CSIR-IIIM will act as a nodal institution.

The areas of interest include industrial agriculture with a focus on commercialization of endemic & other high value medicinal, aromatic and nutraceutical plants/crops, etc.,

Other CSIR’s Contributions to Ladakh:

i.CSIR has set up CSIR-Centre of Excellence for High Altitude Natural Sciences in the region

On September 3, 2020, the Andhra Pradesh Industrial Infrastructure Corporation Ltd (APIIC) has signed a Memorandum of Understanding (MoU) with Council of Scientific and Industrial Research-Indian Institute of Chemical Technology (CSIR-IICT) to set up a Bulk Drug Park (BDP) in the state.