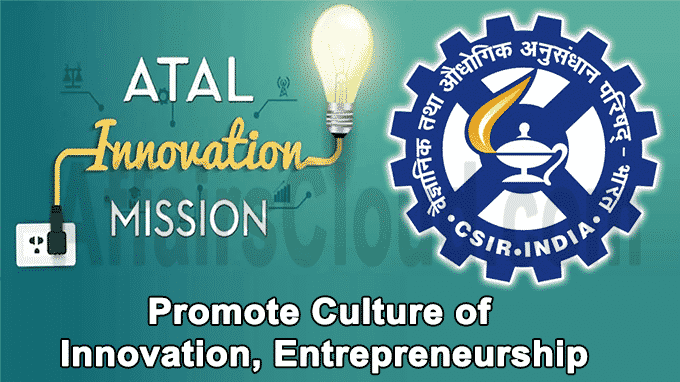 Council of Scientific and Industrial Research (CSIR) and Atal Innovation Mission (AIM) have signed a letter of intent (LoI) to promote innovation in the country in the presence of Dr Rajiv Kumar, Vice Chairperson, Niti Aayog, Shri Amitabh Kant, Chief Executive Officer (CEO) of Niti Aayog and Dr Shekhar C Mande, Director-General (DG) CSIR and other senior officials from both the organizations.

-Supporting world class start-ups through CSIR Incubators under AIM initiatives and jointly work on new models of innovation, including setting up of CSIR Innovation Parks.

-Creating problem solving mind-set across schools in India through close   cooperation between Atal Tinkering Labs (ATL) and Jigyasa. JIGYASA is an initiative of CSIR a Student-Scientist connect program where in >3 lakhs students across the country have been exposed to science and technology while ATLs have been working to foster curiosity, creativity and imagination in school students.

About AIM:
It was mooted by a Think Tank at the Niti Aayog, and approved by the Cabinet on Feb 24th 2016.
Mission Director– Ramanan Ramanathan